Golden boy has more silver on his mind 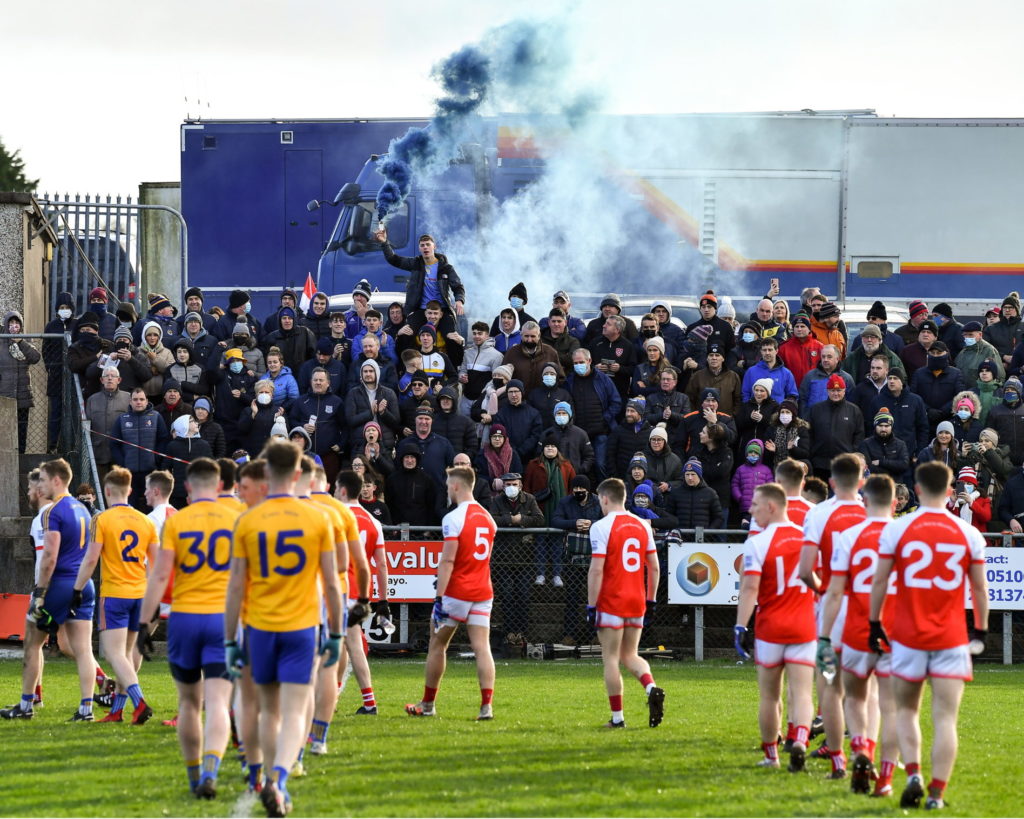 Peter Naughton at the back of the Knockmore parade ahead of their Mayo SFC final clash with Belmullet at James Stephens Park in Ballina. Picture: Piaras Ó Mídheach/Sportsfile

By Anthony Hennigan
Peter Naughton was a newborn baby the year that Knockmore had last successfully defended the Moclair Cup but he was reared on enough stories about the exploits of Brogan, Butler, O’Neill, Staunton, the Dempseys, Sweeneys and the rest, to know there’ll forever be a place in the annals of Mayo GAA for the team that also won two Connacht titles and appeared in one All-Ireland Club final.
“Them boys in the 90s were animals and to do the same as they did, I’m absolutely buzzing,” exclaimed Naughton after last week’s 1-9 to 0-6 victory over surprise packet Belmullet.
“I heard a good story there before, a buck asked in the club one day, ‘Did you ever lift any weights back in your day?’ And yer man goes, ‘I lifted Paddy Moclairs’. So thankfully we can go lifting a few Paddy Moclairs.”
If the football wasn’t of exceptional quality, the 2021 Mayo SFC final was a magnificent spectacle nonetheless, as a capacity crowd flocked to Ballina for the first all-North decider in nineteen years. The sunshine and TG4’s cameras only added to the sense of occasion. Peter Naughton said he would struggle to put into words exactly what it meant to him to be part of a back-to-back title-winning team.
“To do it with this bunch of players is unbelievable. They’re not my teammates, they’re my brothers and that’s what gives us an extra few points in a game. We’d all die for each other out there.
“Belmullet are a great team, absolute dogs. They don’t give you an inch of space in there and credit to them, they battled and battled right ‘til the end. They had a great, great championship but we just believed in ourselves. I know we had already lost to them but we knew we could put that right and thankfully we did.”
Naughton was Knockmore’s top scorer last Sunday with five points, four of them from frees. Fascinatingly, the three frees converted at the other end by Ryan O’Donoghue meant both players finished the season as the senior championship’s joint top scorers on 2-24 apiece, after Naughton had held the Golden Boot outright when Knockmore lifted the Moclair Cup in the summer of 2020.
Played much later this year, championship conditions were very different this time around yet the outcome was still the same – a Knockmore win.
“People were saying maybe it was that the good weather suited us more last year with our style of play but we have shown we can mix it, we can get physical, we can play football, we can do whatever we want to do. To be fair, we were blessed with the day, it was a lovely day for a game of football.”
Peter Naughton had been assisted in the scoring stakes greatly by James Ruddy’s goal deep into first-half stoppage time. The defending champions had been much the dominant team but with Aiden Orme, on repeated occasions, Naughton himself, Kevin McLoughlin and Sean Holmes each guilty of missing scorable chances, they led by just 0-2 to 0-1 after 33-minutes when a brilliant diagonal delivery by Orme released Ruddy who shot low beneath Belmullet goalkeeper Shane Nallen.
“We were dropping a few shots short, wide, and were nearly rushing things a bit when we got around the ‘45’, giving passes when we could have held the ball a bit longer, but the goal came at a great time and thankfully we kicked on in the second-half and hit a good few points,” stated Naughton.
By the 48th minute, however, the feisty Erris men – 80/1 underdogs to win the Moclair Cup at the start of the season – had still managed to reduce their arrears to just two points and an upset remained a real possibility. 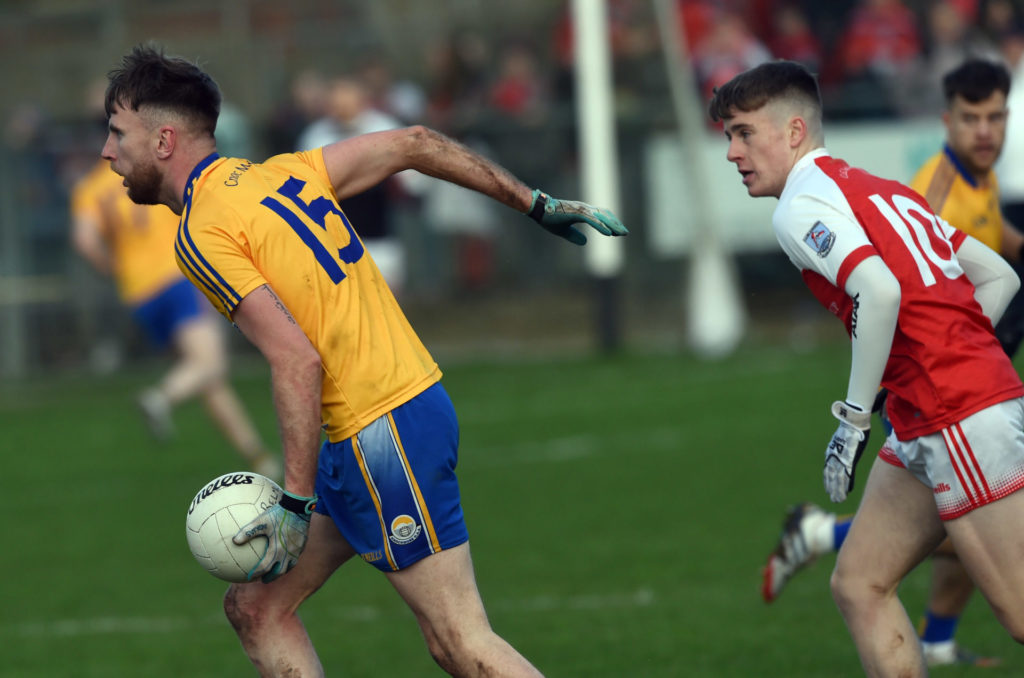 “You really didn’t want to give them a sniff and there was a patch for about ten minutes where it got a bit hairy. But we just had the composure and held onto the ball, boys like Kevin McLoughlin, Shane McHale, around the middle of the pitch, they’re cute on the ball and our mixture of youth and experience just got us over the line.”
Knockmore’s next mission is to see if they can emulate the heroes of 25 years ago and add a provincial title to their collection. They will play Tourlestrane next Sunday after the six-in-a-row Sligo champions got the better of St Kiernan’s by 0-9 to 0-4 last weekend. Among those to feature for the London champions were Mayo natives James Moran, Caoimhim Carthy and Brian Ruttledge, older brother of Knockmore stars Pearse, Keith and Sean. What fun there’d have been in that house had the Exiles managed to pull off a shock at Markievicz Park. 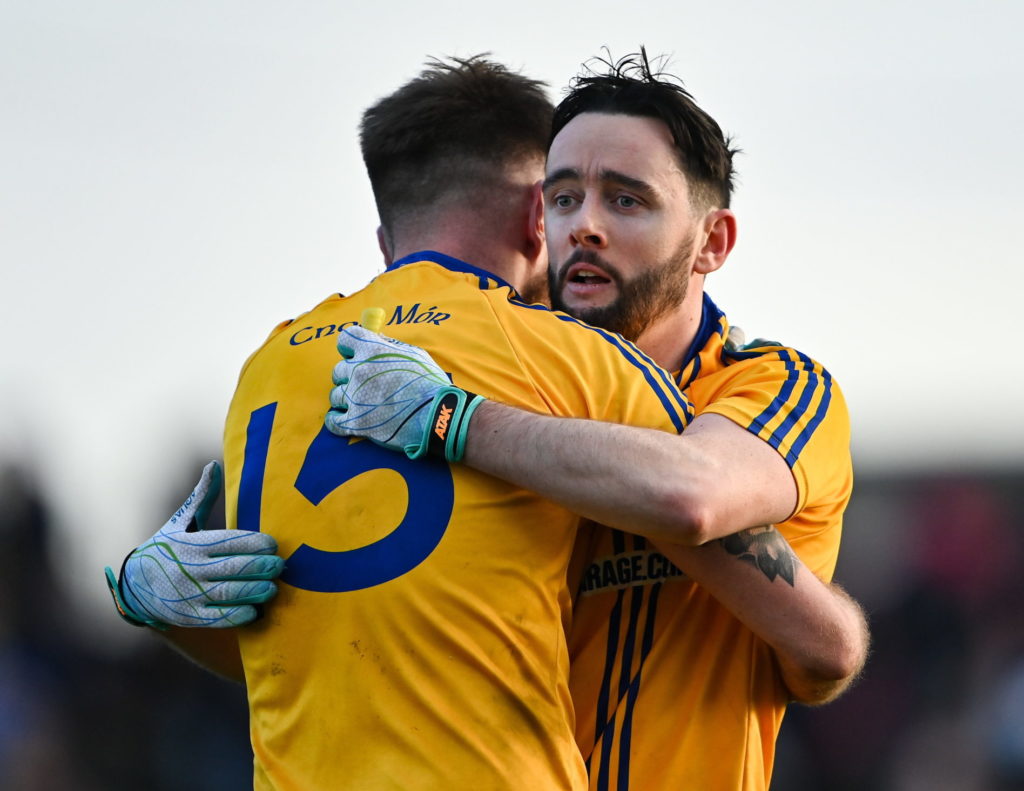 As it is, Peter Naughton will be more than familiar with several of the Tourlestrane team given his past two seasons of involvement with the Sligo senior football panel.
“There’ll be a bit of jibing, a bit of belting but look, that’s part and parcel of it and we’ll leave it on the pitch and have a few pints after the game.
“There was a huge motivation there to retain the county title first, that’s obviously what we wanted to do, but with no Connacht championship last year, we just wanted to see what it’s going to be like and to prove ourselves outside of Mayo. Thankfully we have that opportunity now.”