Calleary calls on the Govt to support hospitality and entertainment industry

Mayo TD Dara Calleary has called on the Government to enhance packages of support for the hospitality and entertainment sector in an address to the Dáil yesterday.

In an address to Minister of State at the Department of Finance Seán Fleming, Deputy Calleary called on the Government to provide extra support packages because the industry is struggling due to new Covid-19 restrictions. The Ballina man brings up the example of a small restaurant that has had 2,324 cancellations in the past two weeks. 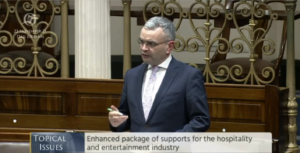 Deputy Calleary has called on the Govt to provide extra support for struggling pubs, nightclubs and restaurants

Deputy Calleary acknowledged that Christmas is a time when the hospitality and entertainment sector has had enough business to keep them going throughout January-March.

He asks the Government are they serious about the sector, or are they taking it for granted.

“The Hospitality Industry in Mayo and throughout Ireland requires urgent specific supports in light of further Covid-19 restrictions.
The Government needs to decide if it is serious about hospitality and the late night entertainment industry – tailored programmes of skill development, training and financial support need to be introduced in an urgent manner and those working within the industry need their specific skills to be acknowledged and recognised,” Deputy Calleary said in a statement on his Facebook page.
In response, Minister Fleming acknowledged the issues that Deputy Calleary raised, but said that the cancellations had been happening before the Government decided to bring in midnight closing times, but he will speak with Minister Catherine Martin about the issues.
You can watch the full exchanges here.
Filed under: Covid-19, Dail Eireann, Deputy Dara Calleary

Appointments for second Covid-19 booster vaccines to begin from today