Straide woman and Crossmolina man were featured on Nationwide

Una Gallagher from Straide and Billy Connor from Crossmolina were both featured on RTÉ’s Nationwide yesterday, as part of the programme’s first of a three-part series about County Mayo.

Reporter Niall Martin visited Billy Connor’s farm in Crossmolina last May, where the Hollywood movie, which became famous for its depiction of the Irish accent, Wild Mountain Thyme was filmed. 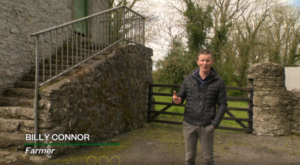 “When these people came to us, we were going to let them do exactly what they wanted on the farm and that’s exactly what they did. I milked (the cows) morning and evening Deirdre went to work and the kids to school. Once the cows were milked, we’d spend the day with them as well, we enjoyed it,” Billy said.

Billy’s house was built in 1790, and after swapping hands with different owners, his grandfather Willy Connor bought it in 1900.

“Our family are now fourth generation of the Connors in the house,” Billy revealed.

Billy speaks about the rising costs in farming and how farming succession can end up with tragedy in families in a very interesting interview.

Una Gallagher from Straide has blazed a trail as the dairy and beef farmer has embraced technology by using robotic milking and computerisation, it is all the more unique in a male dominated industry.

Mary Fanning met Una on her farm in Straide, where the reporter said, “Una Gallagher has been a pioneer for women in farming for over five decades. A top class dairy and beef farmer, she never let her gender get in the way of progression and she’s running one of the most up to date dairy units in the country.”

Una is now in her 70s, but she has become a well-known for being one of the first farmers in Ireland to use robotic milking and young farmers come to her for advice. 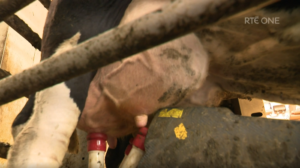 The robotic milking in action

Una started farming in the 1960s with her late husband James, who was a Teagasc advisor, and she has kept innovating since. 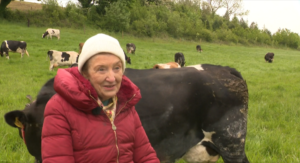 Una Gallagher is a trail blazer in a male dominated profession

Both interviews can be watched here.

Cllr Neil Cruise praised the Mayo pair on Facebook yesterday evening saying they were great ambassadors to the county.

“This evening, in a brilliant interview Una Gallagher (Straide) discussed the positive effects that technological developments have made on her farm. During the interview, Alan Heaney (Killasser) put Una’s huge achievements into perspective. Beforehand, Billy Connors (Crossmolina) gave a great account of the filming of “Wild Mountain Thyme” on his farm & his life running his dairy farm. Both were great ambassadors for Mayo this evening!”

Fundraiser set up for young Mayo footballer diagnosed with leukemia