Colm Boyle has announced his retirement from the Mayo senior football panel this morning.

The Davitts club man picked up four All-Stars in his career with Mayo that spanned over 13 years. ‘Boyler’ made 120 appearances for his county. 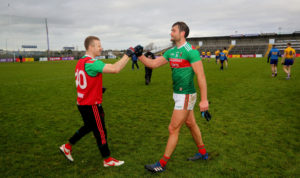 Davitts GAA announced the news on their Twitter page this morning.

It’s been some journey, along with 4 All Stars & representing your country!

Everyone here at Davitts is so proud of the way you represented our club on the inter-county scene down through the years. Thanks for the memories!

See you in the old pitch in February 😅#ThanksBoyler pic.twitter.com/4GD6ZvPF0W