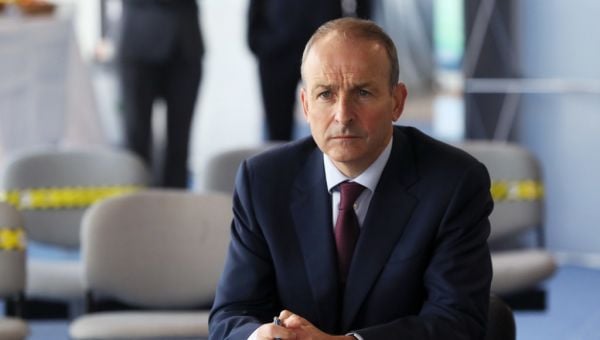 The Taoiseach has said the number of cases of Covid-19 can be reduced without having to go into a lockdown.

Micheál Martin said the Government has other options and responses to help tackle rising case numbers as the Department of Health confirmed 5,634 new cases of the virus on Monday.

At of 8am on Monday there were 684 people in hospital with Covid, 126 of whom were being treated in ICU.

The @hpscireland has today been notified of 5,634* confirmed cases of #COVID19.

*Daily case numbers may change due to future data validation

Speaking in Cork, Mr Martin said he believes pressure on the health service can be reduced, adding that the booster campaign will “have an impact”.

“We can reduce the spread of this virus,” he added.

“The real issue here is the severe illness that people get from Covid. It can have very damaging impacts on people, in terms of long-term Covid and having to be hospitalised so we need to get it down.

“The level of suppression has been quite high, we need to do more and get the R number below 1.

“The responses during this phase don’t necessarily have to be the same as the early phases and we will take it step by step.”

Mr Martin also said the Government is conscious the decision to bring in restrictions last week has had an impact on the hospitality sector.

He said the effect of restrictions will be assessed during a meeting of Government Ministers on Monday evening where they will also discuss a range of financial supports for the hospitality sector.

“The spirit in which we have approached this from the outset in terms of supporting businesses has been one of support, through EWSS (Employment Wage Subsidy Scheme) and other measures, rates relief and so on,” he added.

“That’s the ethos by which we have governed, we have supported enterprises so they could keep workers intact.

“It’s the spirit in which we will look at this, this evening. I can’t get into specifics but we will be guided by advice.

“I know Ministers for Finance and Public Expenditure, Paschal Donohoe and Michael McGrath, will talk on this evening.

“I am conscious that decisions last week have resulted in a lot of cancellations in hospitality and that has had impact. So we will assess all of that this evening.

“Within hospitality there has been a lot of feedback, there are shortages in hospitality, so we will do an assessment as to whether hospitality can absorb any staff that may not be fully retained in the night-time economy because of measures we have taken.

“The feedback has been a lot vacancies in the hospitality sector in terms of recruiting staff.”

Earlier, the chief medical officer warned people against using antigen tests if they have symptoms of Covid-19.

Dr Tony Holohan said there are many people who do not understand when antigen tests should be used.

He said that about one in five adults reported using a rapid test in recent weeks, with the majority of those adults having had symptoms.

Dr Holohan warned that is not the public health advice, and that people with symptoms need to take a PCR test.

We can continue to protect ourselves and others from #COVID19 infection this winter.

The Minister for Health, Stephen Donnelly, will bring a memo to Cabinet on Tuesday which could see the Government subsidise the tests.

Dr Holohan said it is not a mistake to subsidise the rapid tests, but said the public has to understand when they should be used.

“We’ve always said there’s a role for these tests. These tests have been used for quite a period of time, we’ve always recommended the use of high incidence situations to support the investigation of outbreaks,” Dr Holohan told RTÉ’s Morning Ireland.

“What we really need to do now is focus on trying to ensure that people understand when they should use them.

“So if you have symptoms, a PCR test is the right test. An antigen test is not the test for you.”

He said that people who are asymptomatic should take a rapid test before taking part in “some high-risk activity” or thinking of going to a wedding.

He said that a positive result is what the public should rely on.

“If the result comes back positive, you stay away. If the result is negative, it doesn’t mean that you don’t have the disease,” he added.