Why just survive when you can thrive? 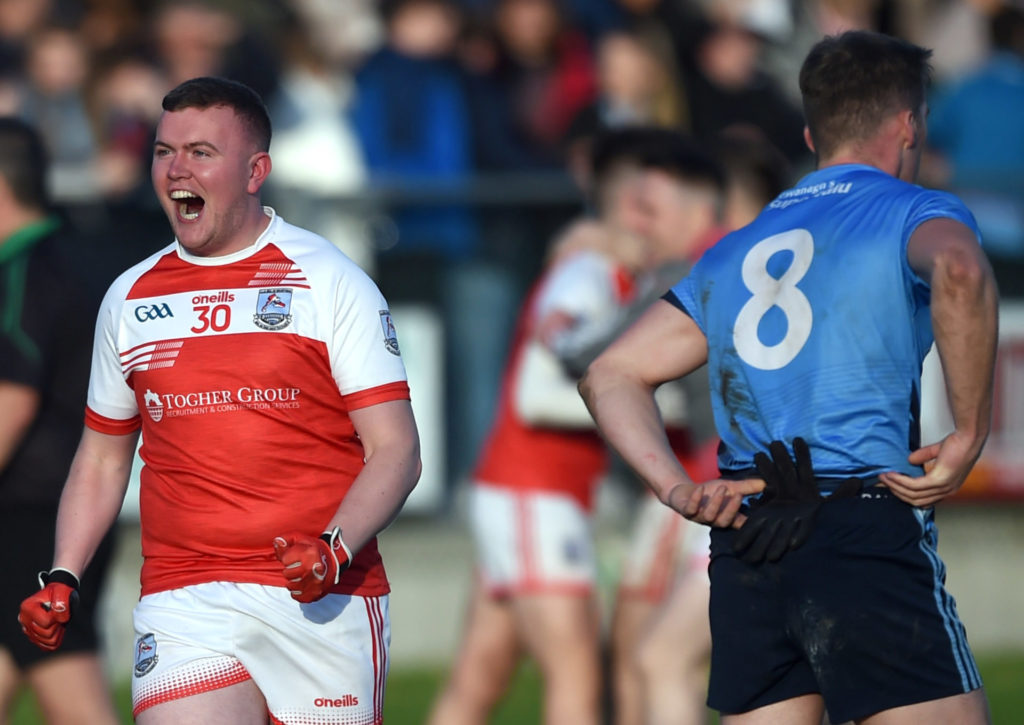 “Padden’s boys can strike faster than the CIE,” screamed one popular poster in Belmullet as they prepared for the senior county final in 1981. If efforts were made to quell the excitement on the Erris Peninsula, they had spectacularly failed. And with that energy bubbling away, a shot at claiming a first senior county title on the horizon, local retailers were experiencing a spike in trading, with “Belmullet are magic” posters also proving particularly popular among the local populace. But even with that irrepressible enthusiasm suddenly invading the area off the back of a semi-final victory, a welcome distraction from the harsh elements brought upon by the beginning of the recession, there didn’t appear to be an abundance of confidence. One club official told these pages in the run-up to the final that he didn’t feel confident of winning, although he still felt the club had a 50-50 chance. It wasn’t a convincing argument on behalf of the underdogs. And so it came to pass: Garrymore, the powerhouse of Mayo club football at the time, triumphed once again.
There wasn’t by any means a dearth of football tradition on the Erris Peninsula, even if they weren’t always spoiled with the resources at other clubs’ disposals. For years before they set down their roots in Tallagh, they travelled the peninsula in search of any plot of land that would enable them to play a little ball. The convent’s facilities were used quite regularly, with the Sandy Banks commonage in Termoncarragh also proving workable in the circumstances. The club also sought refuge at the airstrip in Carne and on almost a dozen other plots of land from Eachléim to Drum to the Crossbanks. The lack of resources may have beat another race into submission but Belmullet not only survived, they thrived. Even without a pitch to their name, they still managed to claim a few county titles at other levels along the way.
They simply accepted their nomadic fate and made the best of it, often cleaning up after sheep that had been grazing on whatever field they opted for before carrying on with their games. But Garrymore proved a step too far for the club in 1981, the absence of some ingrained self-belief perhaps holding them back on the big day. Instilling a sense of self-belief within a group of players is perhaps the most difficult attribute to attain among a group with title ambitions. 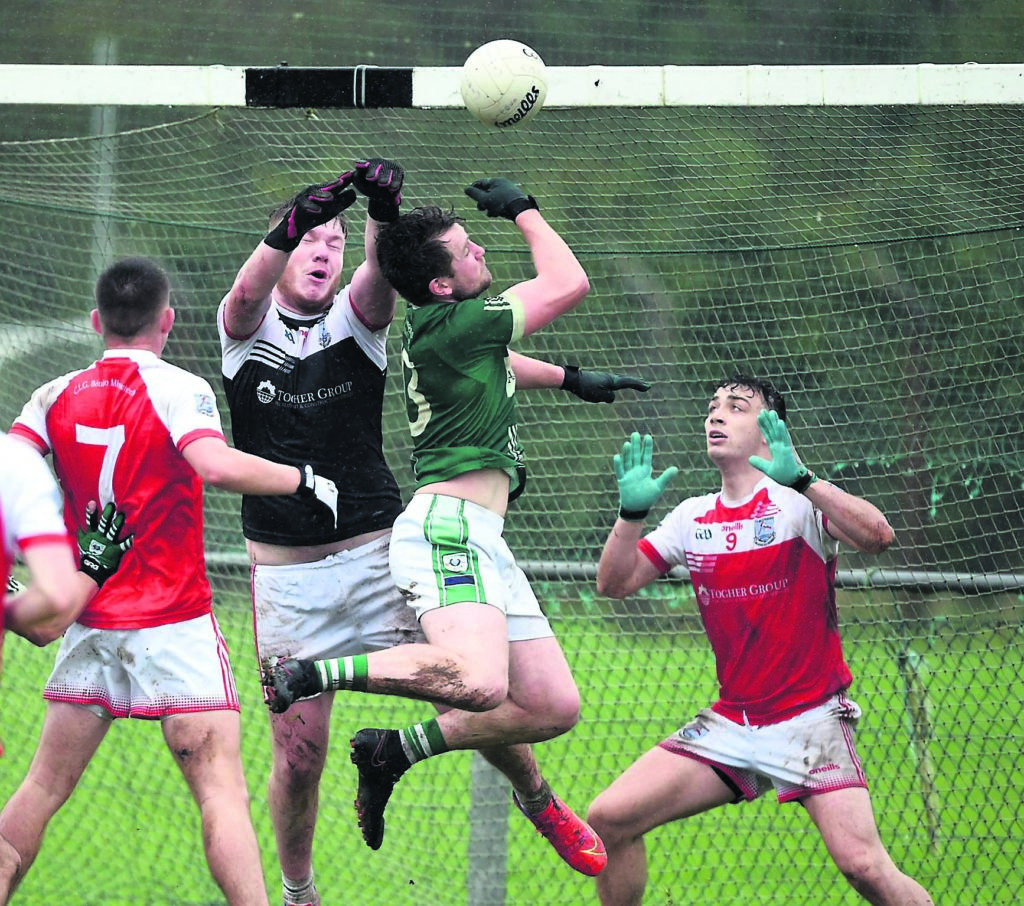 Danger in the goalmouth as the ball hits the Belmullet crossbar during their very opening game of this year’s Mayo SFC. The Erris men have come a long way since that draw away to Charlestown Sarsfields, beating Knockmore, Aghamore, Breaffy, and Westport en route to next Sunday’s final. Picture: David Farrell Photography

Skills can be practised. Tactics can be studied ad nauseam. Strength and stamina can be achieved through hours of toil in a gym. The mind, however, is a different beast. But whether by accident or design, Damien Mulligan has happened upon a switch that triggered belief in the minds of his players in recent months. In the two years following their ascension into the senior football championship, following their intermediate title in 2018, Belmullet failed to claim a scalp of major significance, though that’s no underachievement. Survival has – and will – always be the focus of any side starting out life at senior level.
Their first year at the grade was still immensely admirable as they fought their way into a quarter-final before exiting the competition following a four-point loss at the hands of the eventual champions, Ballintubber. In their second year at the grade they were ostensibly robbed of the vigour that often accompanies sides when they first enter the senior arena, still failing to capture that one scalp that has proven to be the best remedy for a lack of belief. But everything changed on the Erris Peninsula last spring.
Whatever they put into their Weetabix, its effects became obvious from the moment they brought Knockmore to Tallagh last month. They dragged their visitors into a gory battle, leaving them with a mountain of work to get through in their last group game following a surprise loss. This wasn’t the pre-championship script. Ray Dempsey’s side were still the defending champions after all, and should have been preparing for the game beyond as they entered their final group game.
But this Belmullet beast was bred differently to the one of twelve months ago. The noted Knockmore triumvirate of Kevin McLoughlin, Darren McHale and Aidan Orme were kept scoreless by Belmullet’s defence on that day, while Sligo sharpshooter Peter Naughton was also kept scoreless from play. Belmullet had claimed the scalp that had been eluding them since their arrival into the senior division and, in the eyes of everybody looking in from outside the northwest, it meant their year could be put down as a success. Not that they saw it that way.
From that day they couldn’t have chosen a more difficult path to the final, a knockout campaign featuring Breaffy and Westport being akin to Le Tour’s Alpe d’Huez. But on this particular path they also cemented the notion that something inexplicable occurred on the training pitch back in Tallagh earlier this year. They’ve been riding on the crest of the belief that was fostered back then ever since. It’s been the most discernible element of all their performances thus far this season. 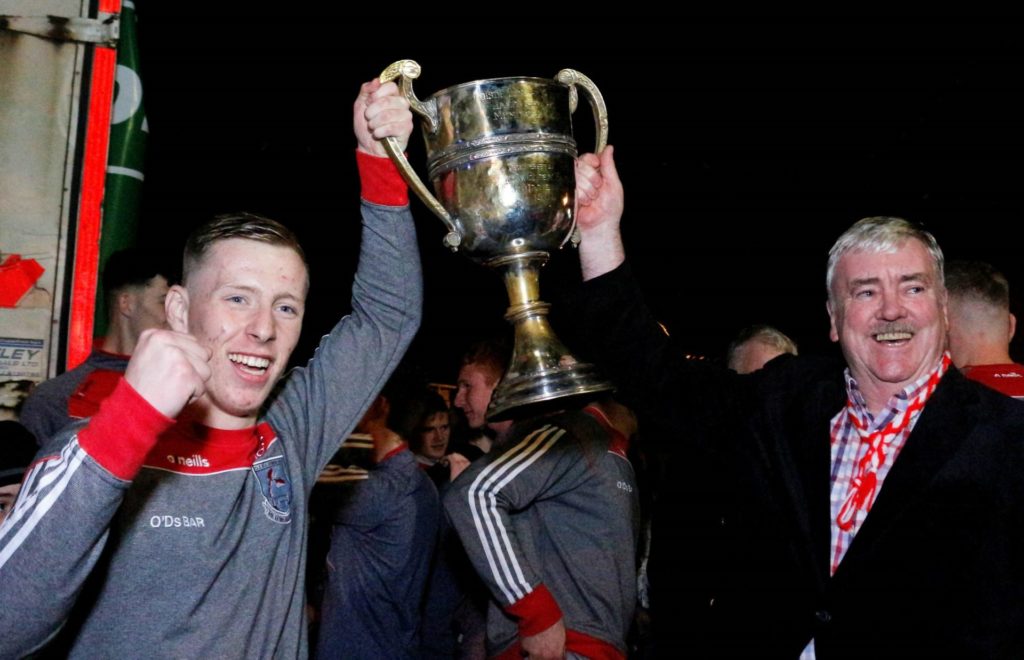 Eddie Walsh, captain of the Belmullet team who won the Mayo intermediate football championship in 1974, with Ryan O’Donoghue who captained Belmullet to their next title in 2018.

It leaves them in a formidable position going into the final and though Belmullet players will like to think they’re being overlooked against a side keen for revenge, only a fool would expect anything other than pure Erris carnage as they return to the scene of their latest scalp in Ballina this Sunday afternoon.
“No one gave us a chance,” Ryan O’Donoghue told Mayo GAA TV in the immediate aftermath of the semi-final triumph. “[We] probably won’t be given a chance in the final again.” The sentiments were shared by his veteran teammate, Shane Nallen, in his interview and they’re shared no doubt by much of the Belmullet dressing room.
It’s fair to say that they hadn’t been given much of a chance at the beginning of the championship, but in a competition that has rarely, if ever, been so open Belmullet have provided too much evidence for their credentials as worthy finalists to be overlooked.
They’ve managed to blend their own unique tradition, built on decades of enduring more hardship than others, with this renewed sense of belief to re-energise the Mayo club almost beyond recognition. Whatever happens on Sunday, the club’s newfound belief could take them anywhere.