Mr Barrett hoping his boys will top the class 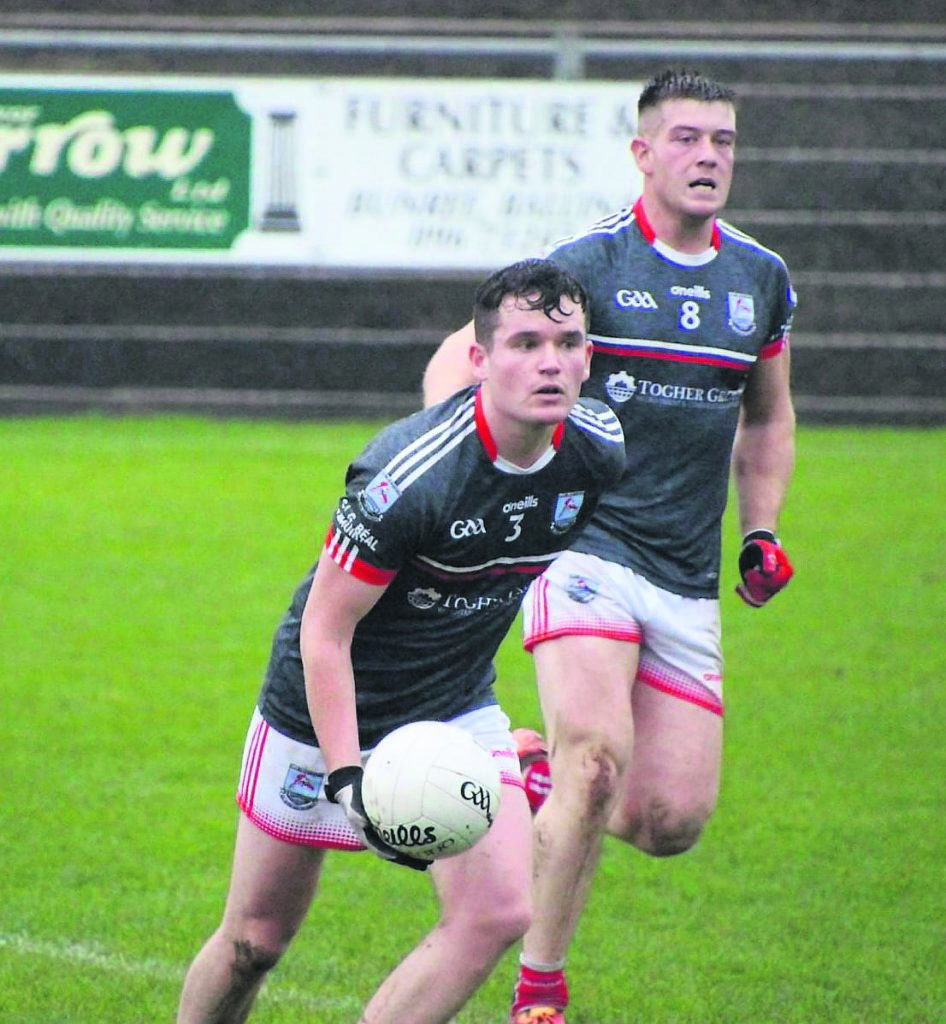 Belmullet vice-captain Colin Barrett clears his lines during the Round 3 victory over Aghamore, the first of four consecutive championship matches his side will have played at Ballina’s James Stephens Park come next Sunday.

Colin Barrett has been able to outsmart some of the most feared attackers in Mayo football this autumn, cutting a commanding presence at full-back for county finalists Belmullet. Trying, however, to get the better of a football-crazed 6th Class at the local national school is, quite literally, a different ball game altogether.
Colin is one month into a substitute placement at Belmullet NS, walking the same corridors he did as a pupil little more than a decade ago. He graduated from Limerick’s Mary Immaculate College as a Primary teacher in October and his first job has suited perfectly given it has kept him local during Belmullet’s amazing run to next Sunday’s Mayo SFC final. And it has suited his students even more.
“They’re cute enough now, they’re trying to put me off-topic the odd time asking about the game,” laughs Mr Barrett! “They’re more excited than ourselves. They’re making flags and pictures and it’s great to see. Even the 7 and 8 year-olds are going around with their footballs and Belmullet tops on them. It’s the same throughout the community, everyone is buzzing around the place looking forward to the final.”
The Belmullet team even has its own Barmy Army.
“We call them our own little hooligans,” Colin Barrett jokes. “There’s about 30 of them behind the goal. If you saw them against Westport, they all ran out the pitch afterwards. And that’s what it’s all about, seeing young lads and girls and hopefully inspire them to play and put on the Belmullet jersey in the years to come.”
And there’s no doubt but that this 2021 side has captured the imaginations not only of their own supporters but of the wider Mayo football community.
Any baby born when Belmullet last played in the county senior football final would have celebrated their 18th birthday in the year that 22-year-old Colin Barrett arrived into this world. It’s been, at times, a painful wait for the club, but this season’s unbeaten journey against Charlestown, Knockmore, Aghamore, Breaffy and Westport, which has secured the senior team its place in Mayo GAA’s Grand Slam event, has strengthened the ties that bind, agrees Barrett.
“There’s no little groups, everyone’s together. Even on our nights out, after every championship game this year we’ve always held together afterwards and had the craic and enjoyed the craic. That’s what it’s all about, it’s what football is all about – playing and having the craic afterwards.
“A few of that [‘81] team have trained us over the years and you’d have heard about how the club was once senior and that it didn’t look great to be intermediate but it just goes to show how much work was done at underage with us, from under-8 all the way to minor. We had a good set-up, we had people willing to train us, willing to travel to the likes of Ballaghaderreen or Ballyhaunis on a school night,” Barrett explains.
And it’s a good point that he makes. The 234-kilometre round trip from Belmullet to Ballaghaderreen is the exact equivalent of driving from Castlebar to Dublin except on much worse roads.
“Those people deserve a big shout-out. Progressing to this final is a reward for all the work that has been put in by our coaches; you couldn’t go naming them one by one, there were that many all the way up, and they all put in great effort.
“And then Damien (Mulligan) and Peadar (Gardiner) have come along, and all the backroom team, they’ve all come together to get us to where we are today.”
Gardiner answered his former Crossmolina teammate’s call earlier this year when agreeing to coach the Belmullet outfit that Damien Mulligan has been in charge of for four years now. It’s a backroom that also features Eamon Dixon, Rowland McIntyre, Anthony Mills, Dan Barrett, Adrian Kilker and Dr Fergal Ruane.
“We have worked a lot on strength and conditioning in the past year, we’re a lot more physical, that bit fitter, and that’s what you really need for senior football, big time,” says Colin Barrett who has older brother Mikey playing alongside him at corner-back and younger brother, 19-year-old Daniel, among the substitutes. 16-year-old Anthony will be itching to join his siblings in the squad in the near future too.
“I think experience is the big thing, because most of us were only a year or two either side of 20 last year. Another year playing football is a big progression at this age. It’s another year of gym work, harder training, better concentration. There’s a nice dynamic within the squad as well, we’re young but there’s a few older lads as well to help bring the younger ones on. 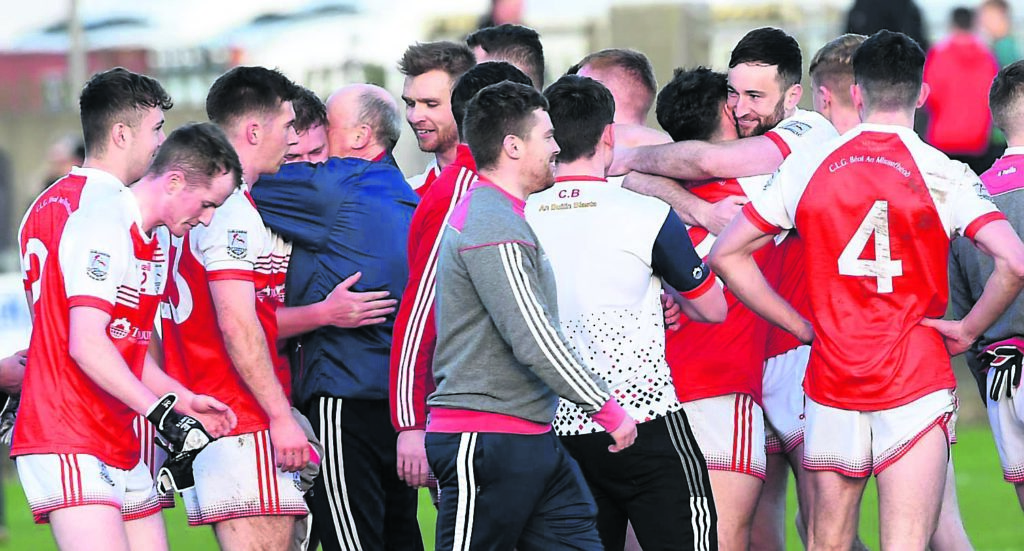 “It’s a big step we’ve made. We didn’t make it out of our group last year and we had a poor league campaign this year so it wasn’t looking all that good. But we regrouped in the final league game against Ballinrobe and took each game as it came after that.
“Every game has been tough. The win against Knockmore down here in awful conditions, we pushed on then with that bit of belief. Damien said to take each game as it comes and we got on a bit of a roll. It’s great to have something to look forward to every week. It has shortened the winter around here anyway,” says Barrett who, as vice-captain, stepped into the breach when team captain Eamon McAndrew sat out the first four rounds of the championship due to an ankle injury. It was a big vote of confidence in the abilities of the young full-back from his manager.
“You’d hate to let him down,” says Barrett about Damien Mulligan. “He’s calm but a great motivator.
“He has instilled that mindset of hard work in us over the years. We were very young, some of us fresh out of minor the year [we won] the intermediate championship. He helped prepare us and build us up that bit every year, not just gym-wise but our basic skills with the ball.
“What he always says is keep it simple. He never overcomplicates. You can talk about tactics but he’d say go out and just play the game, enjoy it and get stuck into your man. It’s fifteen on fifteen and do your best. It’s all you can do at the end of the day.”
If Belmullet’s best is good enough to beat Knockmore, just don’t expect to see Colin Barrett stood beside a whiteboard next Monday morning.