Belmullet are probably the biggest outsider to appear in the Mayo senior football final since my own club, Shrule-Glencorrib, appeared in the 2005 showpiece against Crossmolina. Indeed, it was Belmullet’s coach, Peadar Gardiner, who lifted the Moclair Cup that day for the Deel Rovers. Gardiner wreaked havoc in that final, rampaging up and down the right wing and was the key figure in ensuring us border boys were going to have lifelong regret. 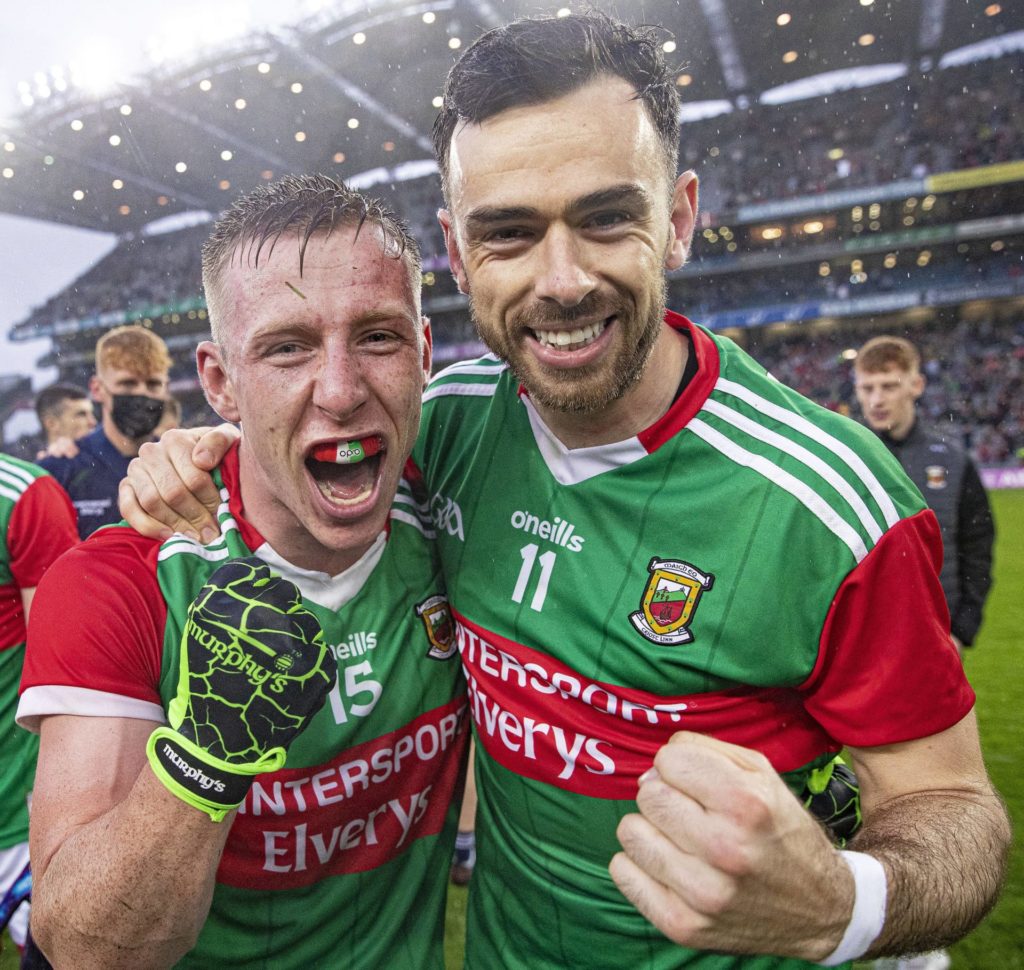 Mayo teammates Ryan O’Donoghue of Belmullet and Kevin McLoughlin of Knockmore celebrating Mayo’s All-Ireland SFC semi-final win against Dublin earlier this year. Which one of them will be smiling though once next Sunday’s Mayo SFC Final is over?

The Erris peninsula has been hopping for the last few weeks. The Belmullet and Cill Chomain flags are flying proudly at full-mast. The buzz in training will have been electric. The local players have become household names and the talk of the town. Every parish in Ireland should experience County Final mania at least once a generation.
If I could offer some advice to Belmullet though, it would be to come down from cloud nine quickly and take advantage of the wonderful opportunity that Sunday’s final presents. This may be their one shot.
I played my first (and only!) county final on that day in October 2005 when I was only 19-years-old. As part of a young and exciting team stacked with oodles of talent, big names and a great manager, I thought that would be the first senior final of many for our club. In my innocence, I probably felt that we would give the final a good rattle (and we did, only losing by one point) but that even if it did not work out, it would be a great learning experience and stepping stone for brighter days ahead. That proved to be very naïve as in my sixteen years playing adult football since, I haven’t gotten near another final. Belmullet are similarly young and exciting with a future that could be paved with gold but in sport, as in life, tomorrow never comes. Win the county final now. 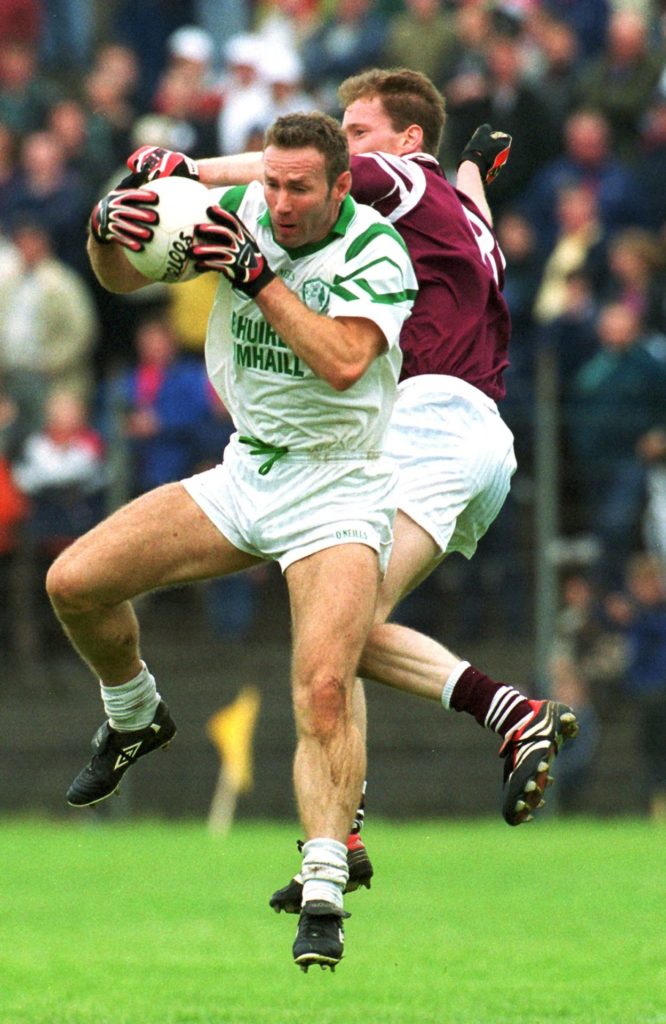 Underdogs get one chance. Balla appeared in a senior final in 1993 and haven’t threatened in the top tier since. Burrishoole also lost to Crossmolina in 2000 but have languished in the intermediate grade for a long time now. Kiltimagh appeared in the 1997 senior decider but now seem to be stuck in intermediate purgatory as if it were some sort of footballing Bermuda Triangle. The problem with coming from nowhere to appear in Mayo club football’s biggest day is that the powerhouses take stock, get their acts together and are forewarned when playing you the following season. Leicester’s Premier League win in 2016 is a prime example. After that astonishing fairytale victory, Liverpool, Chelsea and Manchester City took note, strengthened and have won every league title since. Mayo club football royalty, Ballina Stephenites and Castlebar Mitchels, are in a rebuilding phase but their huge populations and stream of underage successes ensure that they won’t be gone for too long.
Belmullet have a momentum and impetus right now that this group of players may never generate again. This is a moment in time and who knows where any of their squad will be this time next year. The socio-economic factors impacting upon North Mayo will make keeping this squad together a challenge.
And football changes quickly. One minute you’re cock of the walk, the next you’re a feather duster. Our 2005 vanquishers, Crossmolina, now ply their trade in the intermediate ranks. Last month, Dublin club kingpins, St Vincent’s, were relegated from the top tier of the Dublin championship. The 2003 All-Ireland senior club champions, Caltra, played an intermediate relegation playoff in Galway last weekend. The year after losing to Crossmolina in the 2005 final, we were hotly tipped by many local publications to win the senior championship outright the following season. In reality, we fluked a draw against Louisburgh in the first round and exited tamely to Ballina Stephenites in the quarter-finals. My message to Damien Mulligan’s charges ahead of the weekend: win the damn thing on Sunday and don’t die wondering!

Mullin takes long road
In the spirit of seizing the moment, Oisín Mullin has done just that by accepting AFL club Geelong’s offer to be part of their Category B rookie list. While a massive blow for Kilmaine and Mayo GAA, it is hard to begrudge Mullin this incredible opportunity. The pandemic delayed his inevitable trip Down Under but we were lucky to see him light up the last two senior championships.
I flirted with the possibility of professional sport in my teens when trialling with soccer clubs in England so I totally respect Mullin’s drive to make a living as a professional athlete. 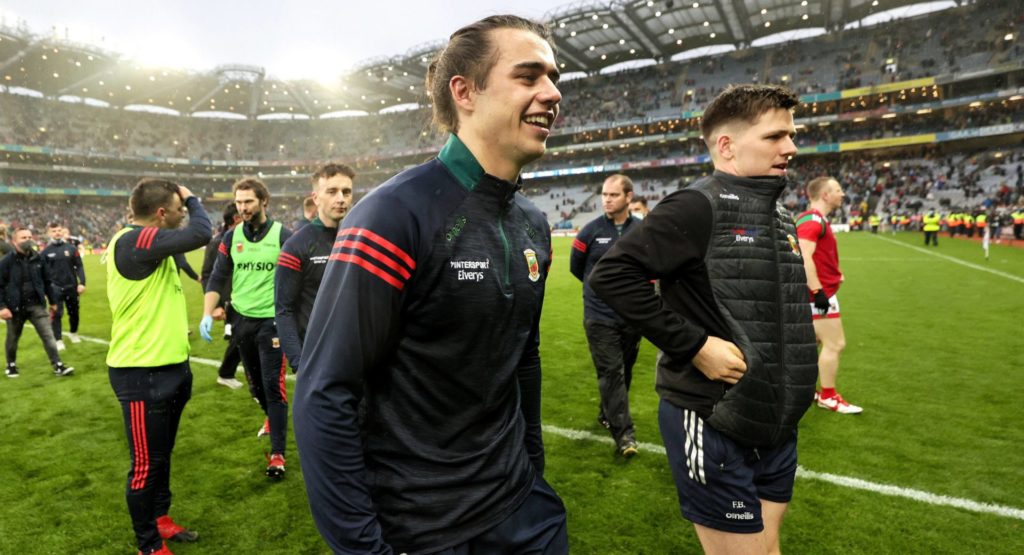 The difference is I was 15 or 16-years-old and would never have settled across channel in such unfamiliar surroundings. At 21, Mullin is a fully developed adult, who has completed his Leaving Cert, obtained a degree from NUIG and played in two senior All-Ireland Finals. At his age, young men are open to new challenges and the prospect of seeing the world and what better way to do it than through a professional sports contract.
There are many Mayo fans who will wish him luck and hope he enjoys the experience but that he is back in the green and red before too long. They will cling to the possibility that he may return and play a starring role in an All-Ireland victory similar to Conor McKenna’s and Cathal McShane’s contribution to Tyrone this year.
I wouldn’t be so sure that will happen, though. For one, Mullin’s sallow complexion is much more suited to the oppressive Oz heat than McShane’s pasty Irish skin! And what’s more, Mullin is such a good athlete and ball player that I think he will make a success of the move. For one so young, he has a phenomenal physique with fierce dynamism and power and will almost certainly take to his new sport like a duck to water.
John Fogarty, in his Irish Examiner column, highlighted that of the 63 Irish players who had signed for an AFL team up to this past season, 36 never made or are yet to make a Premiership appearance. Two of those major successes, however, have come through Geelong’s stable (Laois man Zach Tuohy and Kerry’s Mark O’Connor) thus proving that the Victoria-based club take care of their Irishmen and their career progression.
Another one of those successes, our own Pearse Hanley, is a sharp reminder of the huge holes that these generational talents leave when poached by AFL clubs. I played alongside Hanley in the Connacht Under-21 Final of 2007 when he kicked nine points as a precocious 18-year-old and displayed his incredible potential. It is hard not to feel that he would have made a difference somewhere along the line in Mayo’s decade of pain.
The big gripe I have with the AFL hoovering up the best Irish GAA talent is that the players’ clubs or counties receive no compensation from the moves. Kilmaine and Mayo have pumped huge effort, time, care and expertise into Mullin’s career only to lose him to a ‘foreign sport’ for free at the peak of his powers. At least in soccer, when players move to professional clubs in England, the feeder clubs are handsomely recompensed. Reading FC paid €117,000 to Cork City for the services of Irish internationals Kevin Doyle and Shane Long in 2005. This ‘Training Compensation’ fee is a gesture of goodwill and an acknowledgement of the home club’s efforts in nurturing the great talent. Surely, the GAA should be looking for similar remuneration from professional Australian clubs for its clubs and counties. 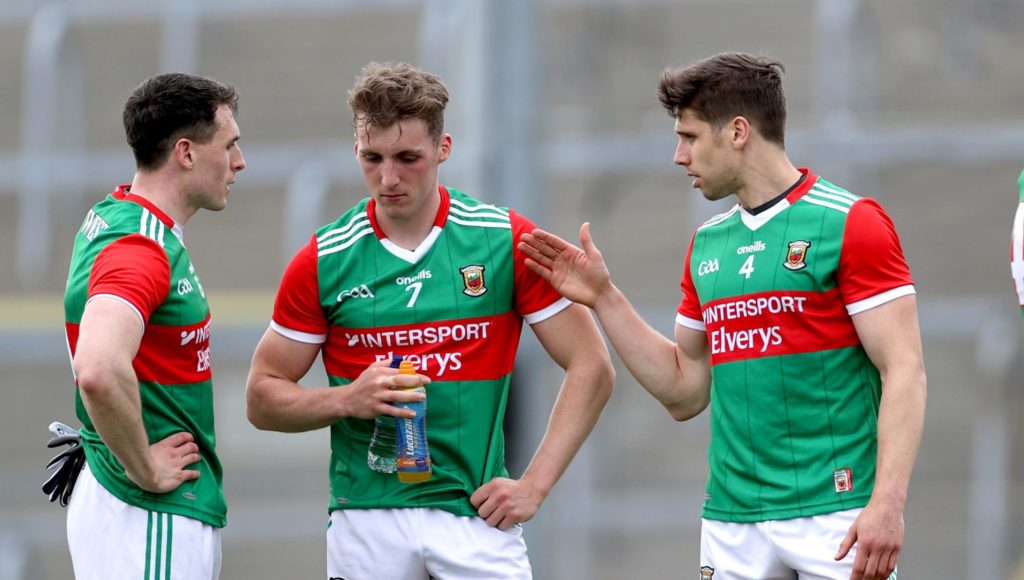 Mayo have reaped benefits from Eoghan McLaughlin (centre) and Lee Keegan (right) being involved in sports other than Gaelic football during their formative years.

But, I suppose, in Mayo we cannot have too many grievances about a talent transfer from one sport to another. Mayo GAA has benefitted from Eoghan McLaughlin’s superhuman lungs hewn on the bike saddle, Lee Keegan’s power and pace cultivated on the rugby fields and Ryan O’Donoghue’s tenacity, wiriness and skill borrowed from the boxing ring and soccer pitches.
Anyway, it will be far from the tropical climes of the Antipodes that Mayo football minds will be this weekend with all eyes trained on James Stephens Park for an intriguing county final.
After Sunday’s game, there may be many glorious silverware-laden years ahead for Belmullet but history shows us that this is unlikely to be the case. The Belmullet players must do all they can to win on Sunday and avoid a lifelong gnawing feeling of “If only” – the two dirtiest words in sport. In that way, Mulligan’s men from the ‘Mullet must emulate Oz-bound Mullin and grasp the opportunity of a lifetime.