Belmullet boys are out to paint the town red and white 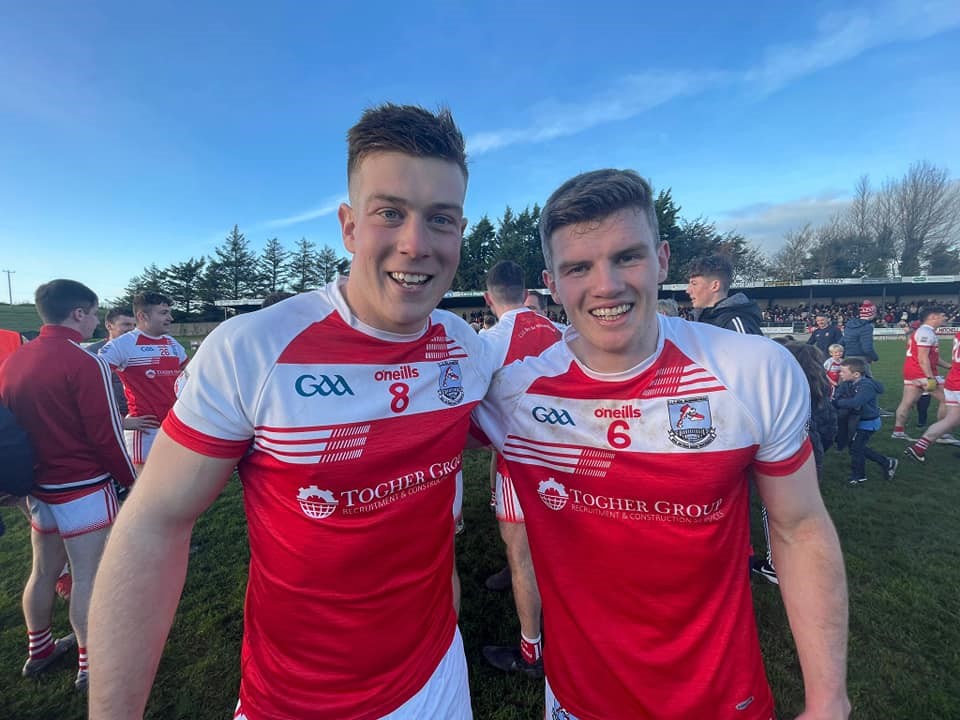 Owen Healy and Eoin O’Donoghue enjoyed Belmullet’s semi-final victory over Westport. The North Mayo club is within 60 minutes of becoming the first team from Erris to lift the Moclair Cup.

If some enterprising Belmullet supporter wants to earn themselves a few quid on the side this weekend, they could do worse than order a batch of red and white hoodies with the words of Eoin O’Donoghue printed across the front: “We’re just here to play football.” They’d sell like hotcakes. Or like the soda bread from O’Donoghue’s An Builín Blasta bakery in the heart of the town.
40 years ago, one week out of from Belmullet’s showdown with Garrymore, the first time any team from Erris had reached the county senior final, Ivan Neill paid a visit to the North Mayo citadel to sample the atmosphere. The legendary GAA reporter remarked in the Western People that most of the drapery shops were doing a roaring trade selling material for the making of flags and banners. Hoodies weren’t quite so in vogue back then.
‘Belmullet are magic’ and ‘Padden’s boys can strike faster than C.I.E.’ were among the most popular slogans according to Neill who said that even four to five-year-old children – boys and girls – from Bangor Erris to Blacksod were caught up in the whole excitement that had been sweeping the area since the team’s semi-final victory over Ballaghaderreen.
“On entering a shop in Glencastle one evening last week to purchase cigarettes, two young children shouted to me: ‘Up Belmullet’,” wrote Neill. I’m still not certain who was buying the cigarettes. I do know though, that you won’t see Barrack Street for smoke if the Moclair Cup is visited upon the capital of Erris next Sunday evening. ‘They’ll burn the bog’, as is said around those parts.
It’s worth stating that Eoin O’Donoghue’s “We’re just here to play football” was not said in advance of this Sunday’s final, nor before his side’s county semi-final victory over Westport for that matter, but in the aftermath of Belmullet’s quarter-final triumph over Breaffy, and came as part of a broader discussion about how his side had already defied the odds by beating both last year’s champions and the beaten finalists en route to reaching the last four.
“We don’t pay too much attention to the odds to be honest. We’re just here to play football. This time of the year it’s anyone’s game,” insisted the inspirational Belmullet centre-back, reckoning the Mayo club championships are among the most competitive in the country.
“In Mayo football there’s never really a stand-out team. I know we had the Ballintubbers and the Castlebars but they were never running away with county titles. There’s teams there, I see them in junior, I see them in intermediate, look at Kilmaine, they only came up from junior last year,” said O’Donoghue after the South Mayo outfit had hammered Crossmolina to reach the last four of the Tier 2 championship.
“Mayo club football is in a really good place and there’s nothing that separates Division 1 and Division 3 teams,” continued O’Donoghue, highlighting the fact that another South Mayo team, Davitts, had secured their senior championship status at the expense of Kiltane despite finishing mid-table in the third tier of the league behind the likes of junior finalists Cill Chomain and beaten junior semi-finalists Islandeady. 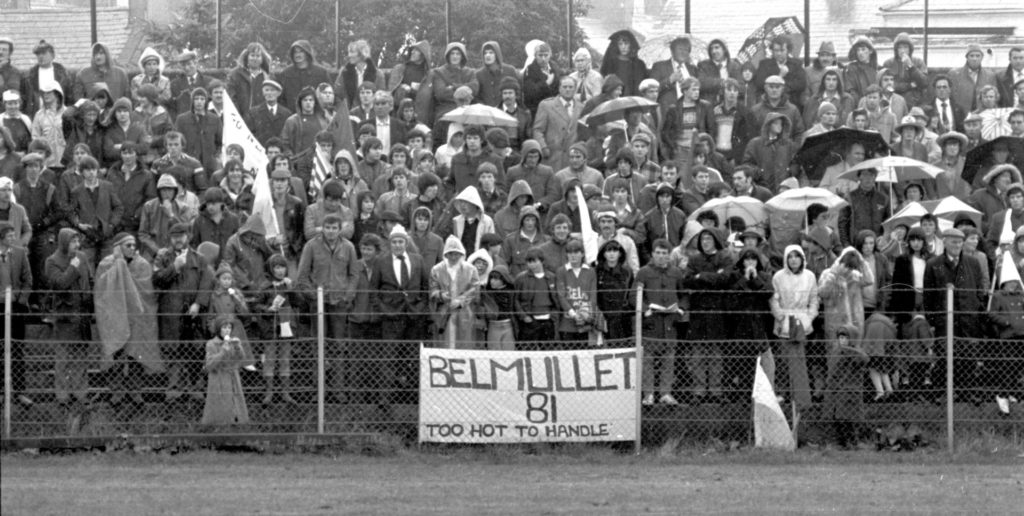 It’s why Belmullet players will need no convincing this Sunday that just like how their forefathers of four decades ago blazed a trail as the first team from Erris to contest the Moclair Cup, they can become the first team from Erris to win it. Not least because in the past couple of months they have already beaten all those who were the three biggest favourites to win this year’s championship, the reigning champions – and Belmullet’s next opponents – included. What’s more, they did so fairly and squarely.
Having been among the handful of neutrals in the otherwise very large attendance at that Round 2 group clash between Belmullet and Knockmore in Tallagh, I can testify that conditions weren’t fit for a barbeque but nor were they as Balticly bad as some would have you believe. Yes, there was a fair old breeze and a shower or two, but if anything the elements had swept across the pitch rather than in any team’s favour. Of course, the Belmullet boys would have had a better feel for those local conditions but Mother Nature was not the root cause of the champions coming a cropper.
Yes, there was fortune about both Belmullet goals, one due to an error from Knockmore goalkeeper Colm Reape, the other when a point attempt rebounded off a post and into the arms of Daithi Cosgrove, who struck both first-half majors, but nor did Knockmore create a whole pile of chances at the other end. And when they did, more often than not there was a Belmullet paw to cause a disruption. In fact, the three Knockmore forwards who all played championship football for Mayo in this year’s march to the All-Ireland final – Kevin McLoughlin, Darren McHale and Aidan Orme – scored zero that day. A fourth forward, Peter Naughton, a member of the Sligo senior panel and top scorer in last year’s Mayo SFC, was held scoreless from play. And out of the 1-4 Knockmore totalled for the entire match, the two points kicked by Pearse Ruttledge in the third and 55th minutes were the only scores from play by the 2020 champions, Naughton having dispatched a first-half penalty. And yet it’s Ray Dempsey’s side who are as short as 2/5 in some places to retain the Moclair Cup in Ballina next Sunday.
It’ll take a brave soul to bet against either team. Me? I’ll just be there for the football.