Sunday is reward for those who kept the home fires burning 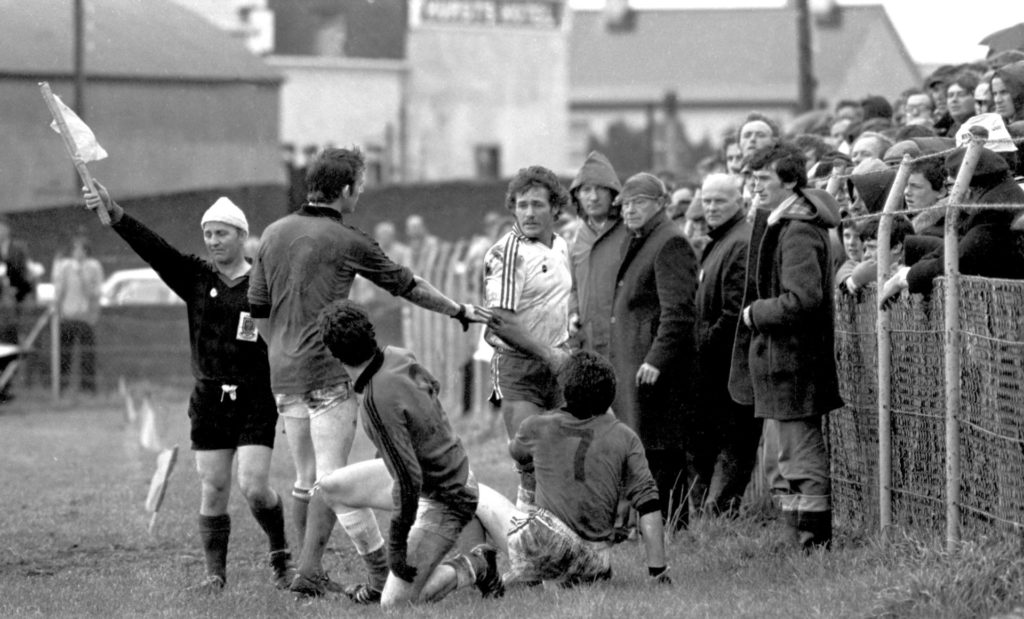 Linesman Patsy Rooney makes his decision as Belmullet’s Liam Donoghue enters a discussion with a trio of Garrymore opponents during the 1981 Mayo SFC Final. Watching on from the sideline are Mayo GAA legends Stanley Rowe, John Forde and Willie Casey along with local reporter Michael Cummins.

By John Cuffe
Almost as if by osmosis, Belmullet materialise into this year’s Mayo senior football final. Many think of it as that far behind place, come on, you know, the place beyond the bogs near Bellacorrick where the power station was, the place the bumpy forlorn R312 from Castlebar finally comes up for air, the place where most competitive games are a hundred-kilometer round trip at least. And, of course, if you are coming from Ballaghaderreen, bring an overnight bag.
Unloved, often ignored, forgotten, almost a nuisance to some Mayo GAA fashionistas, Belmullet is the ghost ship in the night to be avoided. Too much time to think when driving to it, too much time to reflect when leaving it after a match. The badlands are what the Americans call places like that that, places that stretch beyond perceived imagination and norms about what constitutes living and existing.

In fairness, successive governments have done their best to wipe the western outlands that stretch from Connemara through West Mayo and onwards to the Rosses and Gweedore. Close whatever doors in officialdom that can be closed, Garda stations, post offices, banks and any outlying hospital. Neuter the fishing industry with EU red tape and keep the small farmer small. However. Folk that dwell in such places are hardy, just like their fore-bearers. Most may have to travel to survive and thrive but enough remain to keep the home fires burning. And they do.

Belmullet GAA Club represents the above. The name ‘Belmullet’ is a slight misnomer really. That gives the impression of a fixed entity. Belmullet, the GAA team, indeed the town itself, thrives and prospers because of the streams that pour the lifeblood into it. And those streams come from the outlying villages that stretch from Blacksod lighthouse to Ballyglass lighthouse, taking in Barnatra towards Glencastle and Shraigh. Their custom is valued, their friendship reciprocated and validated in the town that bridges Broadhaven and Blacksod Bays. Of course, with the people come the footballers. 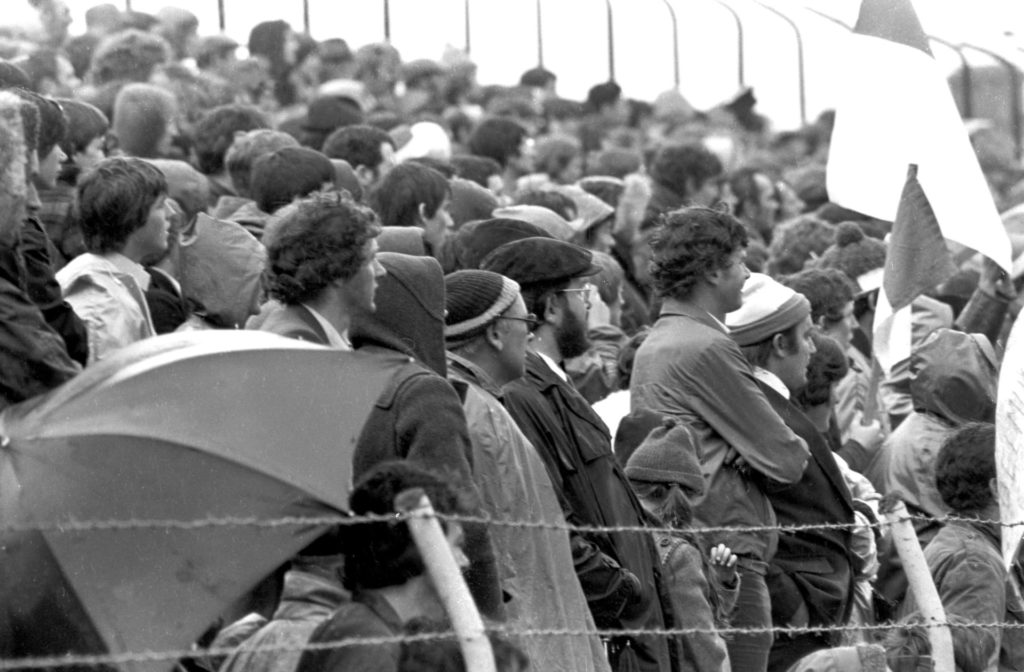 From Fálmòr, Glosh, Eachleam, Tirrane, Elly, Drum, Binghamstown, Gladarí, Corclough, Ballyglass, Borhauve, Glenlara, Morahan, Tipp, Glenlara, Pollacopple, Kockshambo, Toorglass, Shraigh, Gortmelia, Barnatra and Belmullet town itself, come and came successive footballers. The players on tap were never the problem, keeping enough of them was. I would run out of fingers and toes counting lads who ‘had it’ on the GAA pitch but couldn’t hang around to display it. Dublin, the rest of Ireland, England, Wales, Scotland, USA, Australia and Dubai caught them in their nets but thankfully enough always were around to keep Belmullet afloat. Tight at times but alive. Unlike Castlebar Mitchels or Ballina Stephenites, the behemoths of Mayo club football, Belmullet journeyed a rougher and darker road. Not many big silver cups to light it. Just enough to keep the light from going out though. This will be the club’s third senior county final ever. Founded in 1936, they were runners-up in senior finals in 1945 and 1981.

In the early 1970s the myopia that surrounded Mayo club football, with its emphasis on Ballina, Castlebar or occasional divisional combinations, shifted somewhat. The myopia in my opinion was helped by centering club football in the mists of Mayo’s 1950/51 exploits. We lived and fed of a past now slipping rapidly. I was at a county final in 1969 between Ballina and North Mayo where the best players on the pitch were Willie Casey and Tommy O’Boyle. Casey was almost 38 then and O’Boyle not far behind him. But then came three outriders to challenge the status quo for a few years; Knockmore, Kiltane and Belmullet hoovered up senior, intermediate and junior titles between them in successive years. Kiltane won junior and intermediate back-to-back so Belmullet had no choice but to match that silver or forever suffer slights in the Palm Court ballroom. Meanwhile, a club founded in 1960 had, inside thirteen years won their first senior title. That was Knockmore. They didn’t wait to be invited in, they knocked the door down. Football in North Mayo was here to stay.

And so comes Sunday. What to expect? Funnily, the teams going face to face are something of a mirror image of each other. One outfit from near the butt of a big mountain that don’t much care what you think of them, the other, an outfit beyond the bogs, cut from granite and hardened by salty gales. It took Belmullet a long time to do a Knockmore on it i.e. challenge the prevailing beliefs of what people think you are, turn that into your advantage and meet them head-on. Belmullet had shades of Mayo and dare I say Breaffy, nice lads, nice footballers and gallant losers. These last few seasons Belmullet have found their inner self. Let’s rumble. We have all the equipment needed. Let’s unleash it. 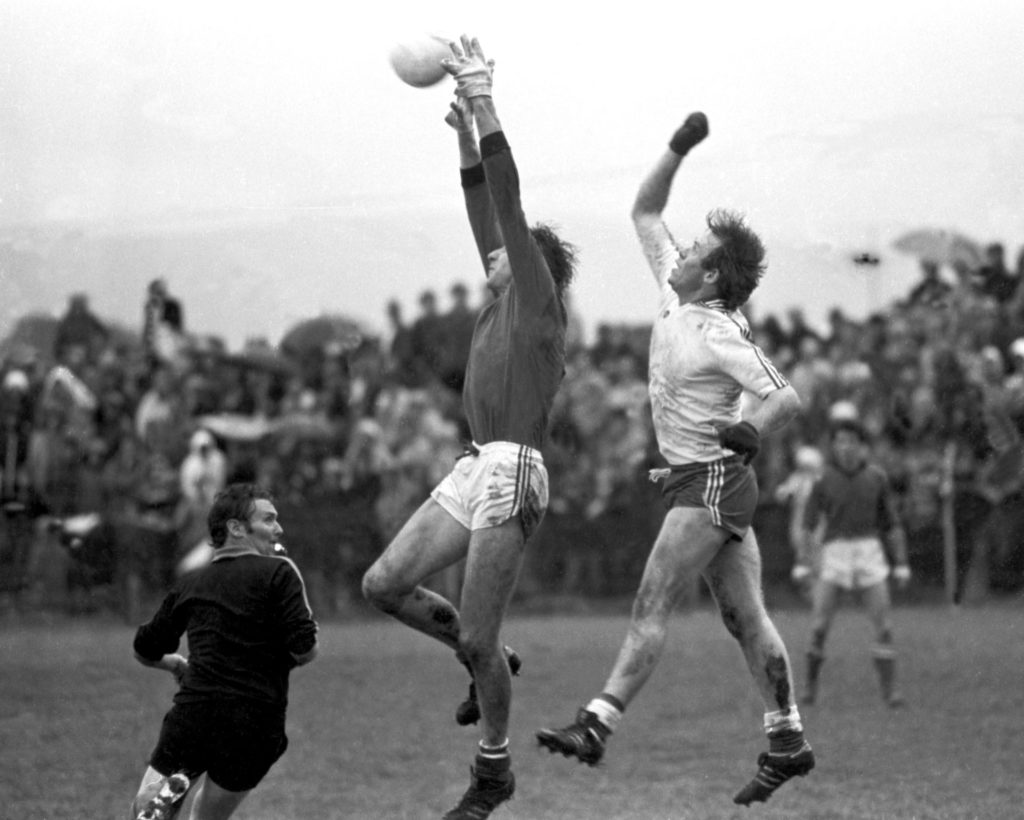 This Belmullet team is not hidebound by history or past players. They are stand-alone and what they achieved is down to them and their management team. No one else. There is no gilded past, no cabinet lit with glittering gold and silver. Each cup that was won was earned against the odds, the two juniors and intermediates almost fifty years apart is scant return for a club that has produced and possessed, often briefly, top-class footballers. If they win on Sunday it won’t be down to Cathal Kilroy, Kieran Gannon, various Reillys, Monaghans, Maguires, Gallaghers, Paddens, Ruddys, McIntyres, Howards, Keanes, Barretts, Lavelles, Welshes, O’Tooles, Munnellys, MacDonalds, Toghers, Gaughans and other ennobled boys. They served the cause gallantly and kept the flame alight. It will be from the fight this current outfit takes to the pitch.

Henry Gaughan, a Mayo minor back in 2003, is on the current Belmullet panel. Chris Barrett, from the minor class of ‘05, won’t be there. These boys highlight the gap between staying and going. Rotha Mòr an tSaoil wrote my mother’s cousin, the Donegal writer Micí Mac Ghabhann: the wheels of life keep turning and twisting. More than likely Barrett will be there to see his former teammates try and make history. No one can doubt the miles, pain and blood shed by Chris for his team, likewise Billy Joe Padden. They kept the faith. But they also know they cannot influence even a wide. It’s down to the team now.

In the late 1960s, Knockmore came occasionally to play St Muredach’s on the college pitch. So did Skreen and Micky Kearns along with Easkey at times. Whilst we always, always got the better of Skreen and Easkey, indeed Ballina and Enniscrone too, we could never take out Knockmore. They played what I eventually saw breath into life, football as espoused by Crossmaglen Rangers all those years later. It has served them well; Knockmore will be looking for a tenth Mayo title in 61 years of their existence. That folks is the magnitude of the task Belmullet faces.

From Nottingham, Leeds, Cardiff, Glasgow, New York, Boston, Dubai, Australia and God knows where else, ears of that Erris diaspora will be glued. It would be nice to win for them and for us all. But we face a team that don’t do nostalgia or happy endings. Damien Mulligan will have his outfit primed. Good luck to one and all.