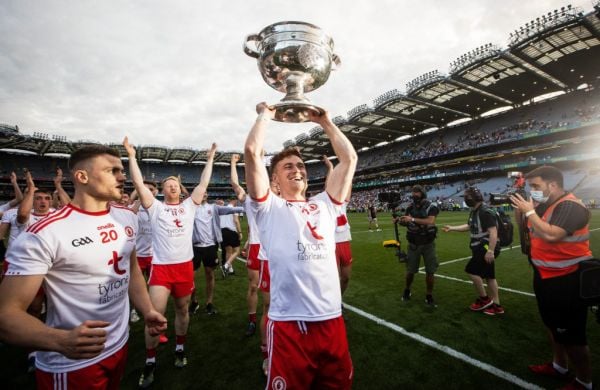 The GAA-GPA All-Stars ceremony has been cancelled due to the latest surge in Covid-19 infections.

The banquet had been due to take place at the Convention Centre in Dublin on Friday, December 10.

A total of eight members of the Mayo senior football team have been nominated for All-Star awards this year on the back of reaching the All-Ireland final, with eventual champions Tyrone rewarded with fifteen nominations.

However, in lieu of the banquet, an awards programme will instead be broadcast between 7pm and 8.30pm on RTÉ Two on the same day.

Confirming the news on Friday, the GAA said: “Due to the ongoing challenges with Covid, the GAA, and the GPA, along with partners PwC, have taken the decision to cancel this year’s All-Star, Joe McDonagh Cup Team of the Year and Champion 15 Team of the Year banquet.”

“This decision has been taken with health and safety in mind,” the association added.

Due to the ongoing challenges with Covid, the GAA, and the GPA, along with partners PwC, have taken the decision to cancel this year’s All-Stars banquet originally planned for the Convention Centre Dublin on Friday, December 10. #PwCAllStars

All-Ireland winners Limerick dominate the nominations for the hurling team of the year and like Tyrone in the football, have fifteen players getting a nod.

Apart from the Red Hands and Mayo, Kerry and Dublin have seven and five nominations for the Football Team of the Year respectively, along with Monaghan (three), Armagh (two), and Cork, Armagh, Kildare, Donegal, Clare and Galway (one each).