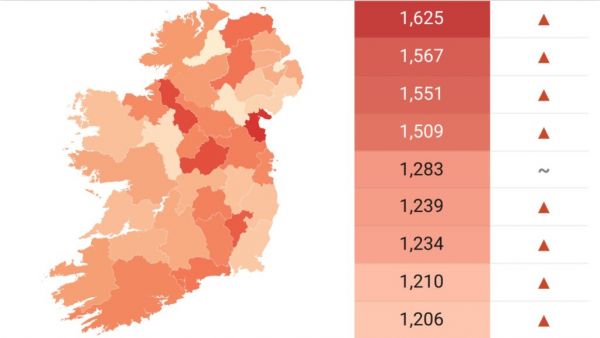 Co Mayo has among the lowest rates of Covid-19 in the Republic of Ireland, even though case numbers in the county are on the rise.

In the two-week period leading up to November 16 there were 1,340 confirmed cases of the virus in the county, giving a 14-day incidence reading of 1,027 which is the sixth lowest in the country. Co Roscommon is second lowest with just 539 cases recorded in the same period.

County Louth has the highest rate of coronavirus infection in Ireland currently, as the number of people contracting Covid remains high across the island.

Counties Westmeath and Carlow are also experiencing high infection rates, with a 14-day incidence of 1,551.2 and 1,508.8 respectively.

On an all-island basis, the Derry and Strabane council area had the lowest infection rate, recording 717.3 cases per 100,000. Belfast follows with a rate of 742.4.

Monaghan had the lowest number of Covid cases in the Republic with an incidence of 785.2.

The majority of people who tested positive in the State over the past two weeks were aged 19-54. Of all cases, 17.2 per cent were among people aged 35-44, and the median and mean age of those contracting Covid was 34.

A total of 8,107 children aged 5-12 were infected with the virus in the past two weeks, representing 14.7 per cent of all cases.

On Tuesday, the Government announced new measures in an effort to curb the spread of the disease.

People will now be advised to work from home, and the phased return to the office has been paused. Bars and nightclubs will also have to close at midnight from Thursday, just a month after the 11.30pm curfew was lifted. The Government is planning to expand the use of antigen tests.

Household members of a confirmed case will be asked to restrict their movements for five days and to take three antigen tests under the new guidelines.