Little to choose in battle of Bally’ and ‘Burgh 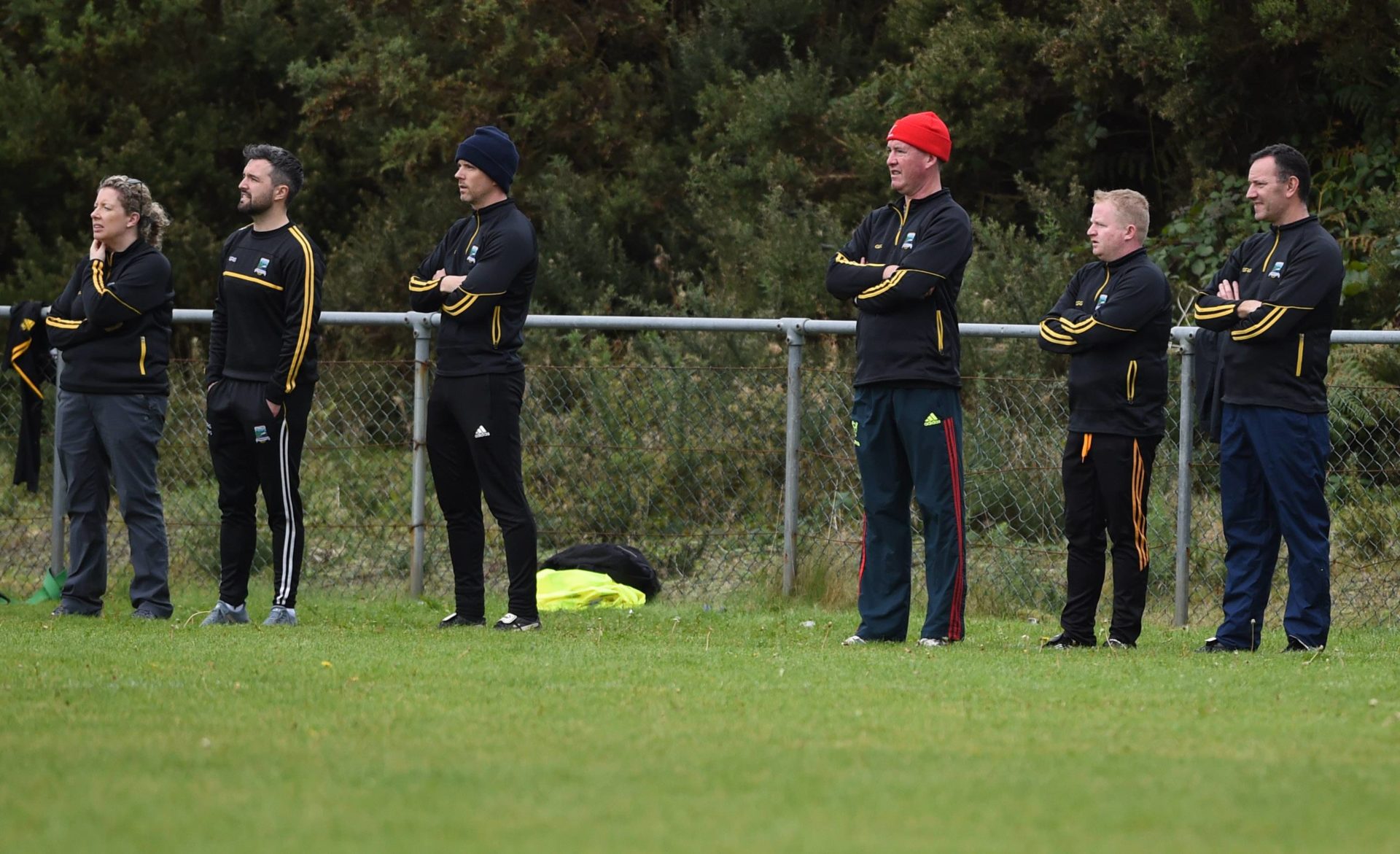 The Louisburgh management team watch on during their IFC Round 3 win over Kiltimagh. The Clew Bay men take on Ballyhaunis on Sunday for a place in the intermediate final. Picture: David Farrell Photography

Ballyhaunis and Louisburgh meet in Castlebar on Sunday lunchtime with a place in the county intermediate final against Mayo Gaels on offer to the winners. Loiusburgh last contested an intermediate final in 2003, when they overcame Ballintubber to take the title, while Ballyhaunis were in a final as recently as 2019, losing to The Neale by a single point in a dramatic finale.

Louisburgh have been one of the form teams in this year’s championship, one of only two sides — the other being the aforementioned Mayo Gaels — to have arrived at the semi-final stage with a 100 percent winning record. They were comfortable winners away to Ardnaree in Round 1, came through a tough examination from Kilmaine in Round 2 and eventually got the better of Kiltimagh in Round 3, albeit after receiving a genuine scare from the East Mayo men, to the extent that Louisburgh’s progression from the group was in jeopardy right up until the closing stages.

They then came through a stiff test from Hollymount-Carramore in the quarter-finals, withstanding the effects of a Darren Coen masterclass to emerge two-point winners, 1-12 to 2-7. Ronan O’Grady’s charges look to be peaking at the best possible time and they will head into this encounter in a confident mood.

The loss of a player of Dylan Prendergast’s calibre for this year’s championship could have scuppered lesser squads but Louisburgh’s forward unit have collectively stepped up to the mark. The likes of James Gibbons — scorer of a hat-trick against Kiltimagh — Oisin Lally, Padraic O’Malley and Padraig Prendergast have all weighed in with scores and the fact that Louisburgh have so many different threats up front makes them a difficult team to plan against. 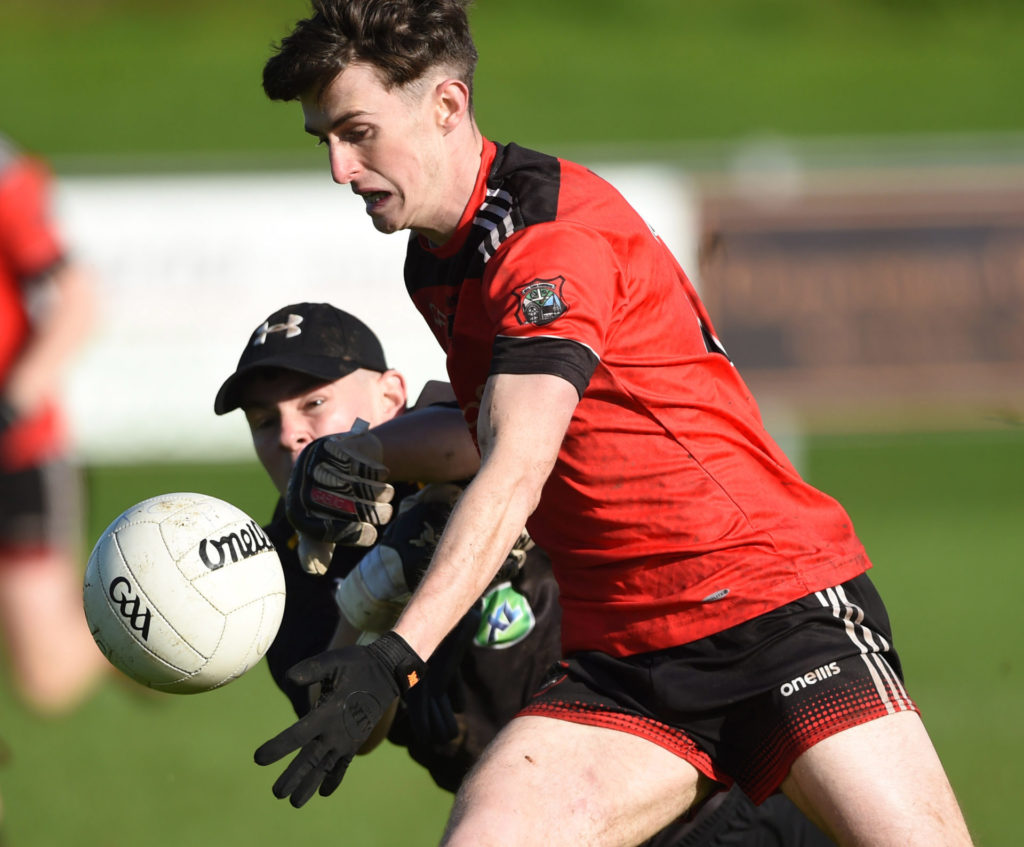 Jason Coyne is one of several dangerous attackers that Ballyhaunis can boast. Picture: David Farrell Photography

Prendergast and Diarmuid Lally make for a robust and dynamic pairing in midfield while a youthful backline featuring Alfie Morrison, Basil McLeod and the Clare Island native Dylan Pinder is bristling with talent, and looks ideally suited to making the big step up to senior in the next couple of years.

Ballyhaunis will be out to ensure it doesn’t happen this year though. The East Mayo men have flown somewhat under the radar to reach the semi-finals for the second time in three years. Their season looked over before it really began after they lost their Round 1 game at home to Crossmolina; teams who lose at home in Round 1 generally have a terrible record of making it out of the group. But they recovered well to beat Ballinrobe away in Round 2 and came through a winner-take-all group decider with Mitchels in Round 3 to make the quarter-finals.

In the last eight, they edged out Parke in a close, tension-filled encounter in Charlestown, with a late goal from centre-back Jarlath Carney eventually sealing a five-point win.

Ballyhaunis’ greatest strength is probably their defence, where Jack Coyne and Keith Higgins form a full-back unit that would be the envy of most senior clubs, let alone intermediate. Carney and David Cunnane offer pace and an attacking threat from half-back and Cormac Philips has huge range in the middle of the field. Up front, Jason Coyne has been in great form over the last few weeks, kicking four points from play against Parke, while Kieran Kiely offers physicality on the edge of the square and Morgan Lyons and Eoghan Collins bring real quality.

An issue that Ballyhaunis always have to deal with when they reach this stage of the championship is the workload on their dual players. A number of their footballers, including key men like Higgins, Kiely, Philips, Collins and Jason Coyne, are also involved in the latter stages of the Mayo senior hurling championship. While Louisburgh enjoyed a rest over the weekend just gone, Ballyhaunis were battling Mitchels for a place in the county hurling final.

And were they to beat Louisburgh, they would have to play a county hurling final during what is nominally another rest weekend on November 12-13, a week before the intermediate final. But such is life for a dual club, and Ronan Kenny and his management team will need to find a way to cope.

It’s not an easy game to call. Ballyhaunis would appear to be coming good at the perfect time and they have recent experience of playing and winning at this stage of the championship. Louisburgh are a coming team and given the spread of scoring threats at their disposal, they will back themselves to come through here. But we’re going to forecast what would rank as a minor upset and give Ballyhaunis the nod.