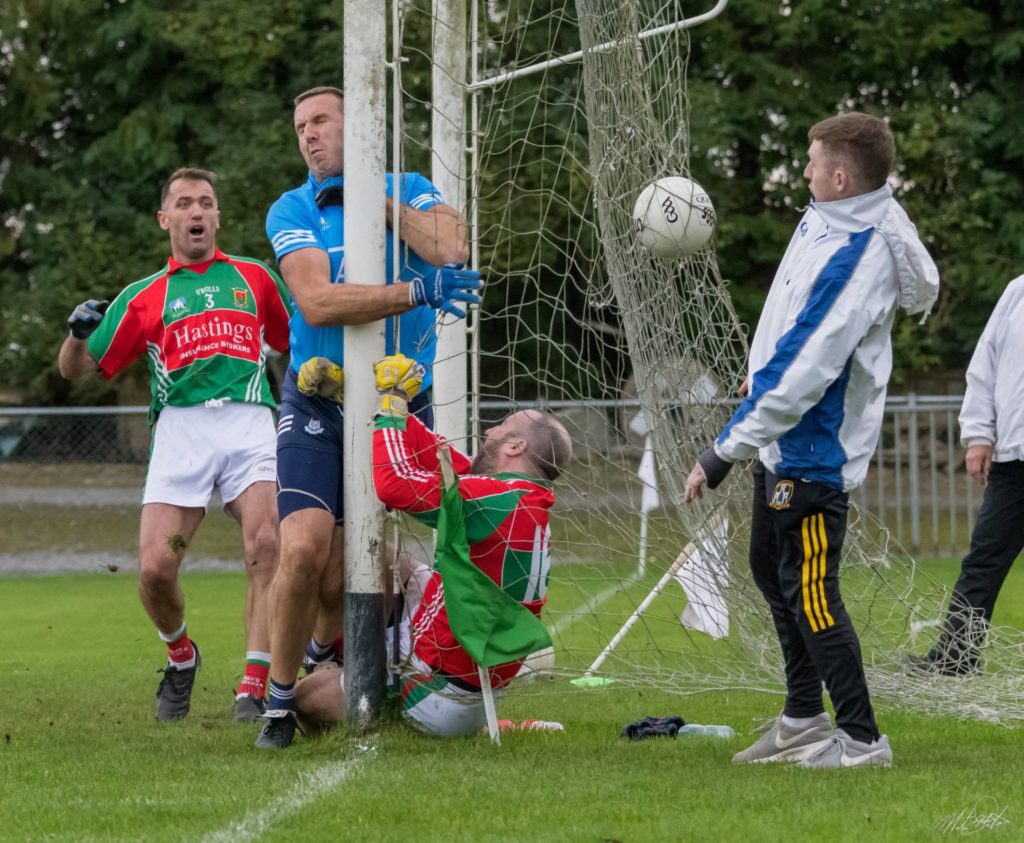 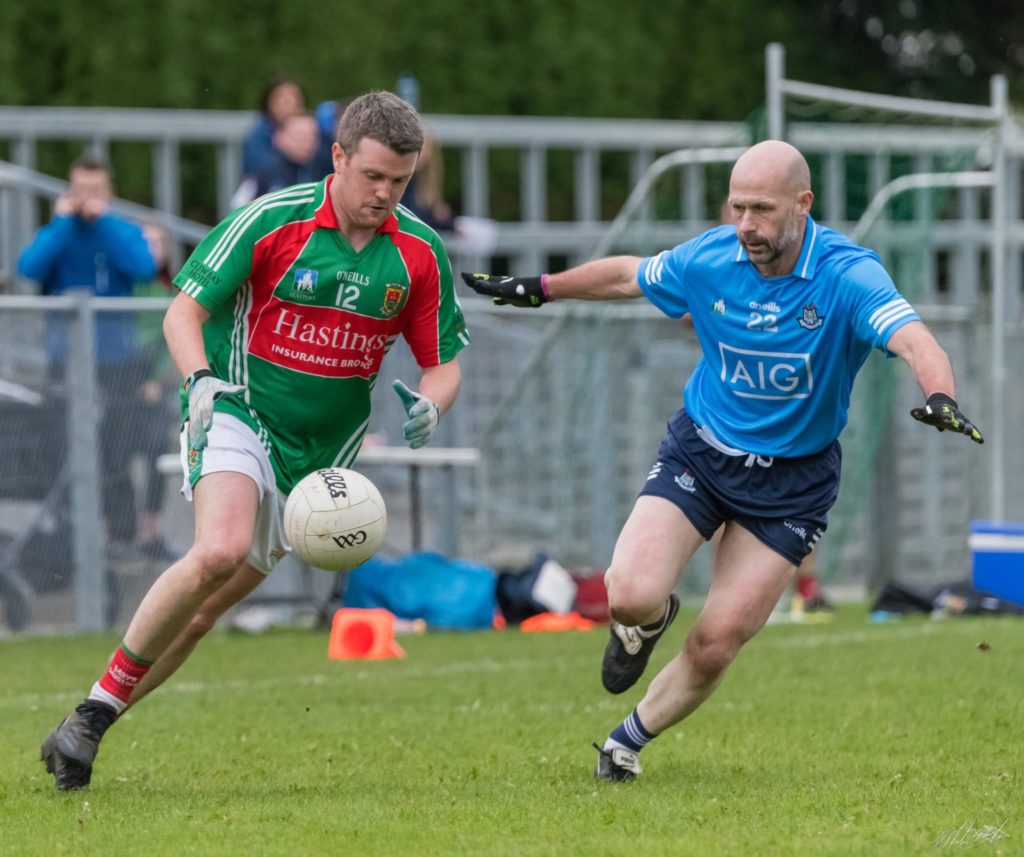 Paddy Hopkins was far and away Mayo’s top scorer across all four games against Dublin, Sligo, Roscommon and Galway. Picture: Martin McIntyre

A wonderful advertisement for the Gaelic Masters Championship it may well have been, but that was of little consolation to Mayo when they ended up on the wrong side of the scoreboard in Kiltoom, narrowly beaten by a Dublin team that had swept aside all before them en route to this All-Ireland Over-40s Football Championship semi-final. The Connacht men suffered a 2-11 to 1-11 defeat at the Roscommon venue last Saturday.
The view afterwards was that the Green and Red could – and probably should – have won this match, despite being seriously hindered by the absence of some key personnel and by several additional injuries sustained during the course of this mile-a-minute contest.
Midfielder Eddie Conroy, an ever-present for the entire campaign, was ruled out of this game only 24-hours beforehand, joining the likes of former Mayo senior stars Aidan Higgins and Declan Sweeney in the sickbay. So then losing corner-back JP Boyle only fifteen minutes into the contest, goalkeeper Sean Kavanagh five minutes into the second-half, and midfield maestro Michael Moyles about ten minutes out from the finish, were severe blows to a Mayo team that was already up against a Dublin squad with a wealth of riches at its disposal. By half-time, the Leinster men had used seven substitutes in the roll-on, roll-off format; Mayo used five for the entire game.
Kavanagh’s injury, unfortunately, was particularly serious, with the game held up for twelve minutes before the Swinford man was eventually removed by ambulance to Tullamore Hospital. It was later confirmed that the ‘keeper had dislocated his knee.
After the trouncings their opponents had already inflicted upon Cork, Kildare and Clare in the competition, Mayo entered this last four clash very much as the underdogs, not that you’d have been able to tell that by the exchanges of the opening quarter, as three times Pat O’Neill’s men hit the front.
The Neale’s Paddy Hopkins punished Dublin fouls on Austin O’Malley and Mickey Mullins by pointing frees in the second and seventh minutes, in between which Kevin Golden had opened Dublin’s account with a point from play. Niall Crossan levelled matters from a free and did so again after Kilmaine sharpshooter Brian Maloney had struck Mayo’s first point from play.
The game’s first real goal chance had arrived in the eleventh minute, and it fell the way of Mayo and to a player you’d have fancied to score, however, Alan Murphy missed his opportunity and on the back of that, Dublin went on to take the lead for the first time, just before the water-break, as Warren Finnegan fired over from play. It would take Mayo the guts of thirty minutes to get themselves back level.
Finnegan kicked two more points shortly after the restart, the second from a free and coming just after Paddy Hopkins had converted his third free of the contest for Mayo, again after go-to man Austin O’Malley was fouled. If it didn’t feel like it just yet, the Mayo players were actually in the midst of a rocky patch that was about to get a whole lot worse before it would get better.
20-minutes were on the clock when the Metropolitans managed to overturn Mayo’s half-back line and launch a sweeping move that resulted in Kevin Golden blasting the ball into the top corner of Sean Kavanagh’s goal, and with Donal Ryan following up with a point some eight minutes later, Mayo had now been outscored by 0-1 to 1-5 in a fourteen-minute period, which left them trailing 0-4 to 1-7 with half-time fast approaching.
With impeccable timing, Crossmolina’s Michael Moyles landed a huge point from the right wing to help steady the ship, and with Brian Maloney scoring his second of the half in the first minute of stoppage time, the gap had been reduced to four points. But that was before Dublin brought the curtain down on an entertaining half of football with a point from centre-forward Tommy Brennan.
The display offered by the underdogs during most of the third quarter would have gladdened the heart of every Mayo person present. We say most because a goal in its very last minute – Dublin’s only score of that period – would ultimately have a decisive impact on the overall result. Up until that dagger, Mayo had scored 1-4 without interruption between the 32nd and 47th minutes.
An excellent team move had ended with Pat Kelly scoring a stylish opening point of the second half when disaster befell Sean Kavanagh. And yet when play finally resumed, it was his replacement Kieran O’Malley’s booming kick-out to Michael Moyles that immediately helped set up Mayo’s only goal of the game. Moyles launched an equally lengthy ball towards Brian Maloney who gathered and rounded his marker before nutmegging Dublin goalkeeper Ciaran Murray from a narrow angle. A free from Hopkins levelled the game at 1-8 apiece in the 43rd minute before the same player’s first point from play, together with a mighty point kicked from long range by wing-back Paul McDonagh, suddenly had Mayo two points to the good and looking on an unstoppable roll.
Indeed, the Connacht men were on the attack again, in the 48th minute, when Moyles uncharacteristically kicked a line-ball on Dublin’s 20-metre line straight to an opposing player. The Boys in Blue sped upfield with their gift and lofted the ball into the Mayo goalmouth. The half-clearance of Kieran O’Malley only dropped nicely for Dublin substitute Richie Herrity who bagged himself a goal, very much against the run of play and only seconds short of the final water-break.
Dublin moved two points ahead upon the restart thanks to Niall Crossan’s third free of the game and although Alan Murphy hit a reply from play, the woodwork denied Paddy Hopkins from equalising. It was the third time that Mayo had struck timber in the game.
Murphy’s was Mayo’s only score of the fourth quarter as Dublin made certain of their place in the All-Ireland final with two late points from Donal Ryan and Warren Finnegan. 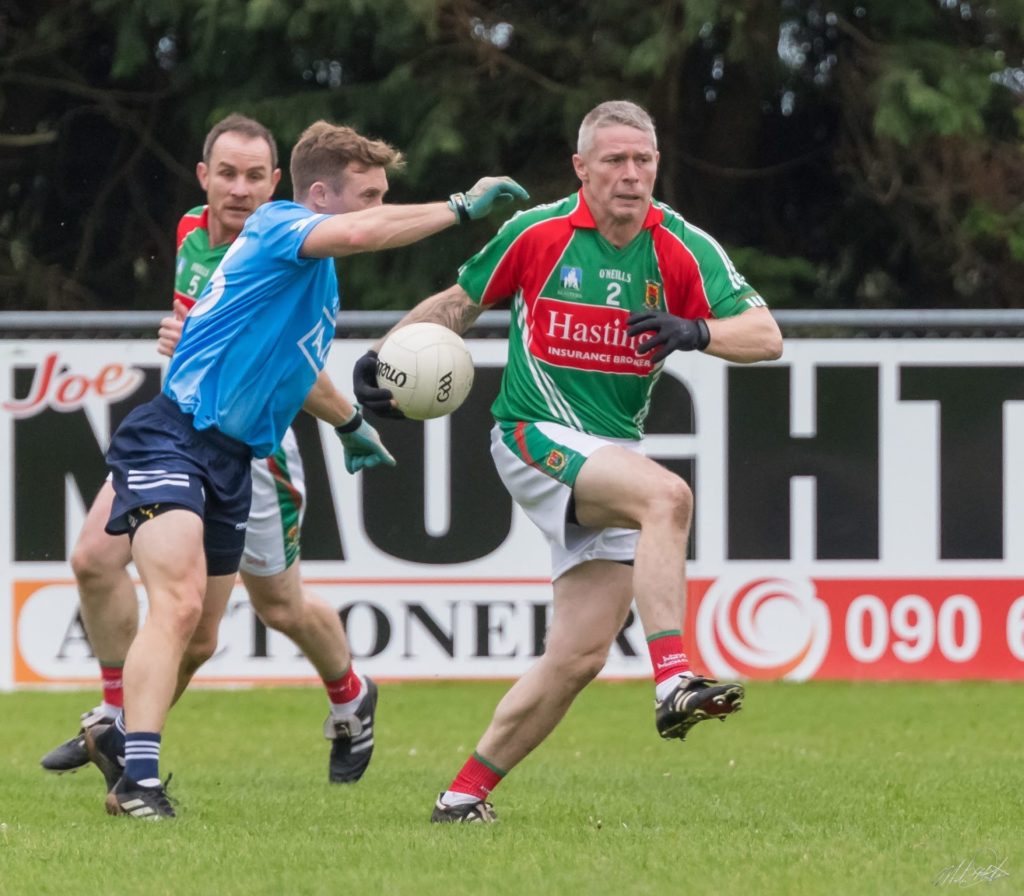 Mayo defender JP Boyle breaks out of defence before having to depart the game through injury.