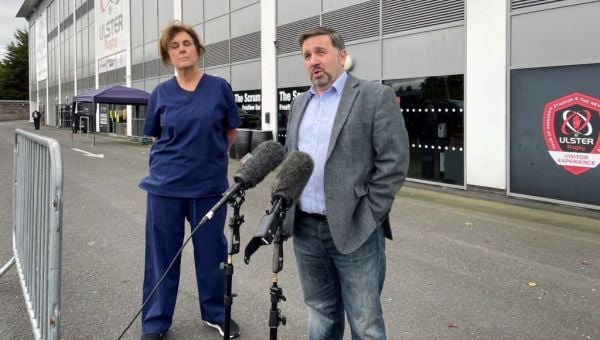 Northern Ireland’s Minister for Health has said he is concerned about public confusion over what ministers have agreed regarding the wearing of face coverings in nightclubs.

The Stormont Executive has agreed that masks will not be mandatory for dancing in nightclubs when they reopen next Sunday.

He was speaking at the Kingspan Stadium, the home of Ulster Rugby, which has become the location for a combined Covid vaccine booster and flu jab clinic for patients of Castlereagh Medical Centre.

Mr Swann said: “What I am worried about is confusion in regards to the message that we have in regards to face coverings. Face coverings are still mandatory in Northern Ireland, should that be on public transport, in retail or in crowded places.

“When it comes to a single message I am concerned that there has been some confusion established in regards to what was agreed, what was talked about.”

There had been criticism of some of the relaxations agreed by the Executive, with Dr Tom Black, chair of BMA’s Northern Ireland council, describing them as “madness”.

On October 31st, nightclubs are due to reopen in Northern Ireland and social distancing rules that currently limit capacity in bars and restaurants will move from regulation to guidance.

People will also be able to move freely around hospitality premises from that date, including being able to stand at the bar for a drink.

Responding to criticism of the Executive decisions, Mr Swann said: “I would ask people to look at the proportionate steps that the Executive has taken in regards to easing restrictions and we have always taken those at a time when we saw there was the ability to do that.

NI #COVID19 data has been updated:

The dashboard will be updated on Monday 25 October pic.twitter.com/QstSeo8BWA

“What I will say, those easing of restrictions came with asks as well. There is an option for any venue to take in guidance the utilisation of Covid vaccine certification or people having received a lateral flow test. I would encourage those venues that are opening up to look to that guidance that is there.

“But also people who are going to nightclubs to be responsible as well. One of the things I would say to them is be responsible.”

On Friday, Mr Swann warned that Northern Ireland’s health service is facing its most difficult winter ever as he detailed winter and Covid surge delivery plans in local health trusts.

Speaking on Saturday, he said: “What the winter looks like, it is stark and it is worrying.

“One of the things we have done and have had to do over the past 18 months is come together and produce those level of plans to make sure that we have contingencies in place.

“We know why we are in this situation. It is 10 years of under-investment in our health service. That is not just in bricks and mortar, it is also in our workforce as well.

The minister also said he was delighted to see so many people turning up at the Kingspan Stadium to get their Covid booster and flu jabs.

Dr Deirdre Savage, GP at Castlereagh Medical Centre, said: “We are very grateful to Ulster Rugby for their support as we aim to vaccinate 2,500 patients over the next few weeks.

“The Covid booster and flu vaccines have a vital role to play in protecting people this winter. We would very much encourage patients who are eligible for both jabs to come forward when their turn comes. You don’t have to contact your GP – they will contact you.”

Meanwhile, 10 further deaths of patients who had previously tested positive for Covid-19 have been reported in Northern Ireland.

The region’s Department of Health has also reported another 1,323 cases of the virus.