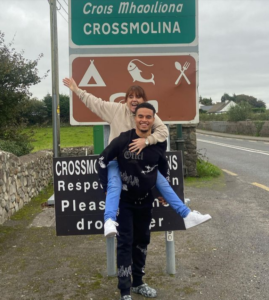 Love Island winner, Toby Aromolaran has returned to his roots, as himself and his mother Victoria, who is a Mayo woman, have visited Crossmolina to spend some time with family members.

The former Hashtag United footballer and girlfriend Chloe Burrows were among the top three finalists in ITV2’s reality TV show during the summer with his girlfriend Chloe Burrows, has been on a tour of north Mayo over the past 24 hours. Yesterday, he paid a visit to the Gortnor Abbey Secondary School, where he posed for a photograph with some Leaving Cert students after rugby training. 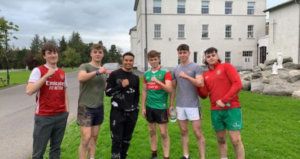 Then last night, Toby presented to the Conn Rangers U12 Girls’ team, who won the Mayo Trophy a few weeks’ previous.

Toby also stopped by Lough Conn to take in all the beauty Mayo has to offer. According to his Instagram, he is set to go home to the UK on Thursday, so he won’t be in Balla on Sunday for Crossmolina’s crunch clash against Ballinrobe in the Mayo IFC.