A call has gone out to schools in Mayo, and elsewhere across the country, from sprinter Phil Healy and fellow athlete, David Gillick, who have joined forces with Fyffes in a quest to find ‘Ireland’s Fittest School’. 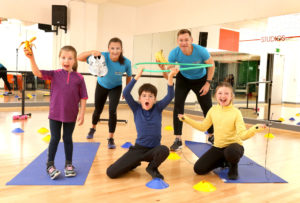 Irish Olympians, Cork sprinter Phil Healy and fellow athlete, Dubliner David Gillick, have joined forces with Fyffes in an online quest to find ‘Ireland’s Fittest School’. Pictured with them at the launch were young supporters, Casey (6), Jerry (8), and Juneau Conroy (10), from Raheny.

Together, the Irish Olympians have recorded a series of workouts which they say are ‘fit for even the least active’ – exercise routines they hope schools will adopt as part of their PE curriculum.

In this latest fitness initiative, Fyffes has introduced a strong competitive element. Coupled with monthly and spot prize rewards, one successful school will have the distinction of being chosen as ‘Ireland’s Fittest School’, the prize for which will be a visit from the Fit Squad ambassadors Phil and David and €5,000 worth of sports equipment.

Registration for the Competition, which runs from November until April, can now be made online at www.fyffesfitsquad.ie, with the overall winner to be announced in May.

Building on its campaign to promote fitness and healthy eating amongst young people, the proven Fyffes Fit Squad programme has been introduced to 20,000 plus pupils in a countrywide series of live school visits since its launch just three years ago.