The north Mayo coastline was the scene of a dramatic rescue missions yesterday afternoon when a diver got into difficulties at Kilcummin Head.

A number of sub-aqua clubs from Athlone, Mullingar and Roscommon were training together when the incident occurred just before midday on Sunday, October 10. 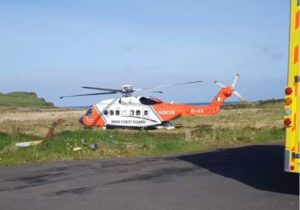 It is understood that a young diver from Co Roscommon became ill after completing a rapid ascent from 14 metres of depth.

Diver first responders and a medical professional who happened to be on site administered first aid at the scene for suspected decompression sickness before the arrival of the ambulance service.

The diver is not thought to have been too seriously impacted but was taken by rescue helicopter to the National Hyperbaric Medicine unit based in Galway University Hospital for treatment.