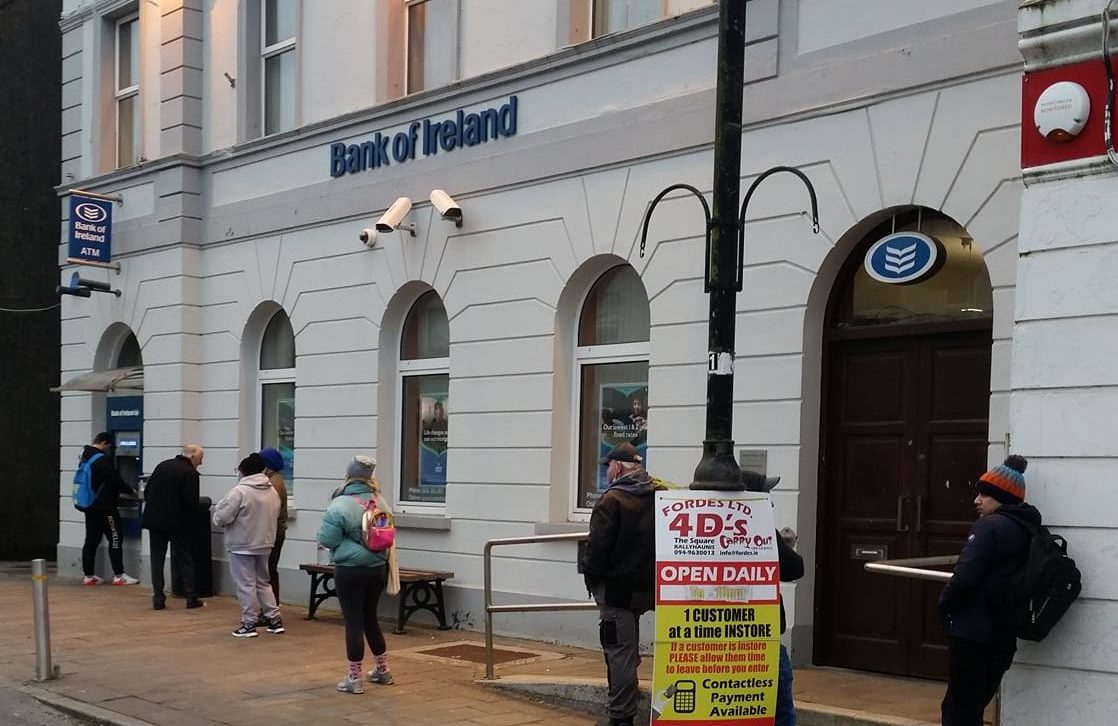 The Bank of Ireland branch in Ballyhaunis is one of three branches in East Mayo, and 88 nationwide, set to close its doors for the final time today.

Three branches of Bank of Ireland in East Mayo – in Charlestown, Ballyhaunis and Kiltimagh – are to close their doors to the public for the final time today (Friday). They are three of a total of 88 branches set to close today, representing over a third of the Bank of Ireland branches nationwide.

The closures are part of a significant change to Bank of Ireland’s branch network and local service structure, first announced last March. Bank of Ireland has said that the closures have been prompted by a 60% drop in the number of customers using the branches in question, with a rise in those instead availing of online banking services.

The closures have caused anger in some of the affected towns and communities. A protest has been planned for outside the closing Bank of Ireland branch in Ballyhaunis today by the town’s Chamber of Commerce. The protest is due to begin at 12.45pm ahead of the branch closing its doors for the final time at 1pm.

A statement from the Chamber’s chairperson, Tom Forde, said that representatives of the Chamber met with Bank of Ireland officials last week to seek clarification for why the branch is being closed and to present the reasons why they believe the decision should be reversed and the branch left open, but were left highly dissatisfied with the meeting’s outcome.

“We conducted a 2.5-hour presentation, highlighting the many advantages to keeping our branch open here in Ballyhaunis, only to be highly insulted by the two BoI delegates who offered no argument as to why Ballyhaunis was being considered for closure,” wrote Forde.

“There was a lot of anger at the way we were treated at that meeting.”

“To think a successful industrial town with employment of 2,500 and a BoI branch that has a monopoly on this business should turn its back on the community despite many reassurances speaks volumes. It’s no accident that our neighbouring towns that still have branches open do so because there is also an AIB presence at these locations.”

The closure of the Ballyhaunis branch, along with those in neighbouring towns like Kiltimagh and Charlestown, means customers will now need to travel at least 20km to Claremorris or Castlerea if they wish to conduct their business in a Bank of Ireland branch.

Forde stressed that the organisers behind today’s protest bear no ill-feeling toward the staff or management at the Ballyhaunis branch, but are protesting to highlight their anger and frustration with the closure.

He also appealed to local elected politicians to engage with the Chamber of Commerce on this issue to find a solution.