Captain Kean and the golden generation

John P Kean with the Tom Markham Cup and the victorious players and management of the Mayo team who won the 1971 All-Ireland Minor Football Championship.

By John P Kean
We often look at the past through rose-coloured spectacles but sometimes there’s an event we look back on that is full of its own colour. On Sunday last, 50 years ago, I, and a whole collection of other Mayo people had one such day. It was the day the Mayo minor football team of 1971 came to Croke Park as rank outsiders but left several hours later with the Tom Markham Cup on the team bus.
It’s the stuff of dreams and proof that with enough quality and commitment, and belief in yourself, and in your entire group, that dreams do come true.
But dreams rarely come true without a lot of preparation and for me, that started with a group of Claremorris townies who, for years, invaded every playable patch of available ground within a mile of the town centre, to put down our jumpers as goalposts and run off our own regular mini All-Irelands.
There was Kennedy’s triangular field across the Dublin railway line, and Maloney’s (or was it O’Brien’s?) on the Station Road. There was the famous ‘plot’ in Ardroe. And then there was Dillon’s field which was a bit larger and where games could go on for hours but without anybody losing count of that all-important matter – who was in front!
I had a lovely neighbour down the street from me, Mrs Howley, and for several summers she was visited from the UK by her grandson Billy, who was an excellent soccer player. How we loved testing our skills against those of our exotic visitor! Those really were the halcyon days of summer, and we loved every minute of it.
It wasn’t until I was 16 that sport became more structured for me. In 1969 I played minor for Claremorris and was coached by one of the finest human beings I would ever meet, someone who was an outstanding coach and man manager. Austin Garvin was the first hugely positive influence in my football life, a man with a great knowledge and understanding of the game and even though at that stage he wasn’t all that many years older than us, a man with a real paternal, hugely caring approach to his players. The Mayo minor group of 1971 were incredibly lucky to have Austin as our manager/coach, as were the minors of Mayo for the nine years that followed.
Austin, as manager, and his management team, with seven Connacht minor and two All-Ireland minor successes, is surely one of the most underrated success stories in the entire history of Mayo GAA!
We were correctly installed as rank outsiders on September 26 because we had just about stumbled over Tyrone, who included the magical Frank McGuigan in their number, in a semi-final where our forwards (yours truly being the main culprit) shot thirteen wides in the second half! Wasteful didn’t adequately describe it. It was woeful but we got over the line. I have to think that Cork thought they were going to have a relaxed day at headquarters on Final Day. What they didn’t know, was that Austin had taken the six forwards to the local forge and we had our boots straightened good and proper.
In the All-Ireland final we were firing the points in from left, right and centre, and Ray McNicholas and Mickie Maloney weighed in with two excellent goals. Our total of 2-15 gave us an eight points winning margin, which allowed us to soak up the atmosphere and savour the dying minutes of the game. I can only imagine the excitement our parents and families were feeling as the final whistle approached, and they knew that they were going to welcome home an All-Ireland winning son. 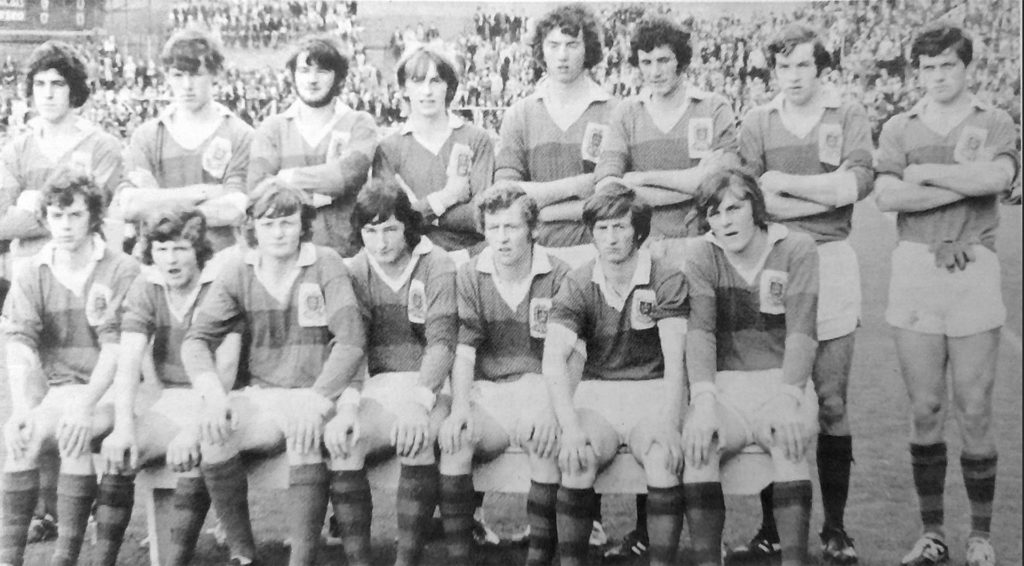 The Mayo minor footballers before their clash with Cork in the 1971 All-Ireland final at Croke Park. John P Kean is middle of the front row.

At the final whistle, I was whisked away by a Croke Park steward and propelled in the direction of the Hogan Stand. I hate speeches, but I wasn’t worried about this one. We came to win, and I had my speech off by heart. My introduction ‘as Gaeilge’ had been pre-vetted by another wonderful man, and another club mate, Proinnsias O’Maolmhuaidh, a legendary St Colman’s College teacher who later became my regular squash partner and a great friend. Everything was a blur after the team came down from the Hogan Stand, the lap of honour, the wildly different post-game team photograph, with overflowing joy replacing the stern determined faces in the pre-game photograph.

With apologies to my marker that day, Mick Corbett, I have only one regret, and it is captured in a photograph of a very happy but pale and slightly flabby me, exchanging my number 11 jersey. I occasionally look at that picture and shout ‘Noooooooo, don’t do it’. But, too late, what’s done is done, and cannot be undone, and to come away from an All-Ireland final with only that one negative memory is something to treasure.

We were a group of people who proved the old adage that there is no I in team. I can say with certainty that the team was selected purely on merit, with no regard for your reputation or club. Austin and the rest of the management group, led by Paddy Waldron of Ballyhaunis, and which included the late Paddy Muldoon, did a tremendous job. On different days, different players came to the fore to drive us forward or to dig us out of a hole we had gotten ourselves into, and our bench weighed in with big cameos, and crucial scores.

I am always loathe to pick out any player from the group, but our half-back line of Gerry Feeney (RIP), Con Moynihan and Johnny Culkin was the best line on our team, as every one of our opponents discovered that year, and I have to say that my great friend Con was the man for the big occasion. I also have to mention the ‘terrible triplets’ from Claremorris – Mssrs Higgins, Maloney (RIP) and Kean – who tormented opponents from Dillon’s field to Croke Park over many long teenage years.

1971 was not an era of political correctness, which one of my diminutive Claremorris club-mates discovered as he ran to his position at the start of the game. His Cork opponent famously remarked, ‘Well would you look at what they’re sending up from Mayo now – f****** dwarves’. My fellow triplet, who was not someone to mess with, said: ‘At the end of the game we’ll see who the dwarf is.’ And the rest, as they say, is history!

I know it’s 50 years later but during that time we have lost Seamus Reilly, Ger Feeney, Michael Gannon and Mickie Maloney, all as young men, long before their time. We remember them and their families and thank them for all they gave to us, and for their service to our county, and for their contribution to the story about that dream that never dies. May their gentle souls rest in peace.