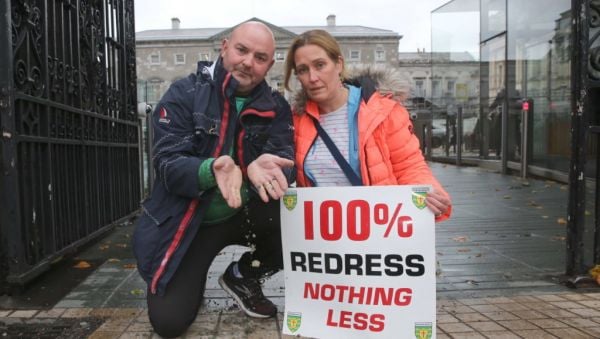 The State could be left with a bill of up to €3.2bn to fix the issues in homes affected by mica in Mayo and Donegal, a report of the Government working group has found.

Earlier this year the Minister for Housing Darragh O’Brien set up the group comprising homeowner representatives and department officials to examine potential changes to the defective blocks scheme.

As The Irish Times reports, the group circulated its final draft report late last night and did not recommend 100 per cent redress which campaigners have been seeking.

Instead it found that a 100 per cent grant should be made available for remediation work that does not involve full demolition.

The report says that “based on the homeowners’ final submission the estimated costs of the changes requested could rise by €1.8bn to €3.2bn.”

The report states that it is difficult to predict with accuracy the number of homes which will be eligible for funding under the scheme.

It states that taking away the estimated number of impacted homes not eligible for the scheme currently, the department estimates that approximately 6,600 homes may require remediation.

“This includes all potentially eligible privately owned homes in the counties of Donegal and Mayo and an estimate for homes in other local authority areas which may come into the scheme. This figure also includes an estimated 1,000 social homes which according to local authorities will need remediation.”

“Given the scale of Exchequer funding required, any changes to the scheme which contribute to a further rise in the projected cost will require very serious consideration by Government.”

It called for “reasonable, evidence based solutions” which “must be justified from an engineering perspective”.

The report found that while the current average cost of a remediation under the scheme for privately owned homes is €214,000, based on the homeowners’ final submission “this would require grants increase to an average cost of €380,000 but up to €524,000 which could rise further