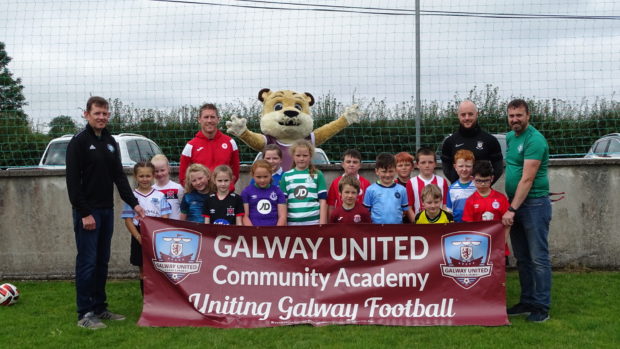 It was a day with lots of fun and lots of different colours at Conn Rangers football club last month when they held a #MyLOI event to highlight an incredible campaign the club has been involved in.

Earlier this year, a couple of club members were discussing the lack of Irish club shirts they see at training. Occasionally, they would see Irish international shirts but never a Sligo Rovers or Galway United or any League of Ireland shirt.

PRO of Conn Rangers, Sean O’Sullivan told the Western People that he wanted to try and do something about it.

“I wrote to all of the clubs asking them for a jersey or a training top and to be honest, I thought I might get a couple but I didn’t really expect much of a response.”

But to the surprise of the Conn committee and members, the response was phenomenal with Shelbourne, Galway United Bohemians, Cobh Ramblers, Drogheda United, Finn Harps, Sligo Rovers and Shamrock Rovers all donating gear to the club.

In addition, kit manufacturer Umbro got wind of what was happening and they gave the club one shirt from each of the LOI clubs they sponsor while McKeevers also sent on some shirts. A couple of local people also got involved and contributed some funds to go and buy some more shirts.

“So now we have about 40 jerseys that are going to go to our Academy boys and girls,” said Sean. “We hope that by wearing and seeing the jerseys the kids will become a bit more familiar with the clubs and realise that we have a domestic league we should all be supporting.”

“Ultimately it’s all about building an awareness of the LOI within the club. We would hope to get some LOI players down to Conn Rangers to do an occasional session with the kids, gets the kids familiar with the Mayo players in the League and then get the kids to a game, to the Showgrounds or Eamon Deacy Park, or maybe further afield, so they can experience a proper LOI game.”

“Most of our kids will have been to McHale Park or Croke Park but have no concept of what it’s like to be in the Showgrounds under lights on a Friday night with Bohs or Rovers in town and 3,000 fans in full voice,” Sean added. 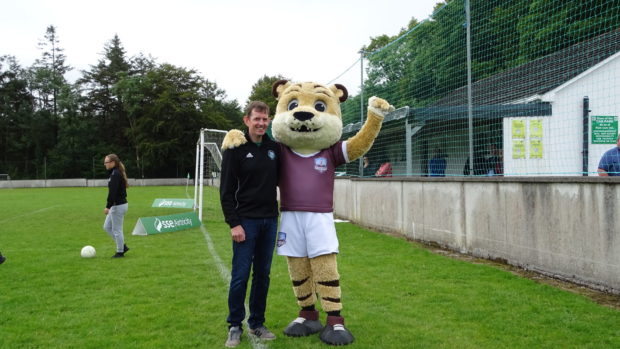 The FAI liked the concept of what Conn Rangers were doing and decided to call down last Thursday to see the kids in their LOI jerseys and see what the #MyLOI campaign was all about.

The kids had great fun, playing a few games with the head of the Sligo Rovers academy and former Bit O’Red captain Conor O’Grady and Athlone Town goalkeeper and Kiltimagh native Michéal Schlingermann. The Galway United mascot Tony the Tiger was there too and he posed for photographs and tried out a few ball skills of his own.

Conor O’Grady praised Conn Rangers for what he described as a “brilliant” initiative.

“It’s great to come to Mayo. The county has been very good to Mayo in terms of providing players like David Cawley from down the road to us here and supporters over the years. It’s so great to see the kids wearing the jerseys of the LOI,” said Conor.

“We’d like for them to be wearing Sligo Rovers kits! But it’s still great to see them in the colours of these domestic teams as opposed to Arsenal, Liverpool or Man United kits. We’re not going to change that overnight but if could more young lads and ladies interested in the local game, it’d make a huge difference in the long run.”

“This event will be a highlight for the kids. Those who have the jerseys will probably go home and find out more about their team and keep a lookout for them. It’s a great initiative and the more we can something like this around to clubs, especially in rural areas, the better it will be for the domestic game.” 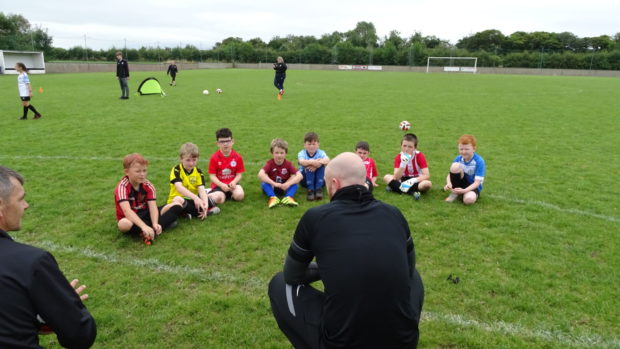 Michéal Schlingermann, who has played for a number of LOI clubs, said it was “weird and wonderful” to see kids lining out to play football in kits belonging to the domestic clubs.

“It’s great for the club here, a great initiative. My first experience of LOI football was when I was about 15 or 16 and I went to see Sligo Rovers play at the Showgrounds and it’s great to see a younger generation and young children getting that exposure to the LOI at an earlier age.”

“They get to wear the jersey and now they’ll probably go and find out more about whatever club’s jersey they have on. If not for this initiative, they’d probably never wear, for example, a Waterford FC jersey but now they’ll go home and try to learn a bit about them.”

“This is really igniting the fire in them and giving them a target, knowing there is a higher level they can go to from outside the local leagues if they decide to try and pursue a career in football somewhere down the line.”