Patience urged ahead of opening of North’s £100 voucher scheme 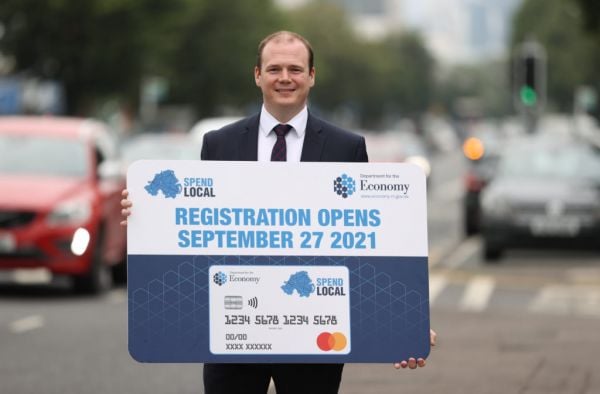 Patience has been urged ahead of the opening of the highly anticipated High Street voucher scheme in Northern Ireland.

The High Street Stimulus Scheme will see all those aged over 18 eligible for a £100 (€116) pre-paid card to spend on the high street, aimed at supporting local businesses.

It had been due to open at the start of the year, but was delayed due to a fresh surge of Covid-19 cases.

The application process opens for the scheme on Monday, with the first cards set to be issued on the week beginning October 4th.

The North’s Economy Minister Gordon Lyons told MLAs last week the timing had been designed to plug a retail lag in the autumn before people start shopping for Christmas.

Retail NI has urged shoppers to consider making their application later in the week to avoid a rush on the first day and to reduce pressure on the online portal.

The group’s chief executive Glyn Roberts advised patience at the start of the scheme.

“If people can wait a few days before making their application, hopefully we can avoid any delays or problems with a rush on the online portal and they will receive their voucher on a timely basis,” he said.

“With a scheme of this ambition and size we are bound to experience some problems and would urge shoppers to be patient.

“As the scheme opens and consumers are thinking about how to spend their voucher, we would strongly encourage them to use with local independent retailers. 70p in every £1 pound spent with an independent retailer is recycled around the economy, supporting local producers and manufacturers.”

Social media: Education rather than restriction is key to children’s online safety