Shortly after the final whistle blew on this year’s All-Ireland final, Lee Keegan was still lingering on the pitch with a smile on his face. Croke Park should have been the loneliest place in the world for a Mayo man, but the Westport player sat shooting the breeze with Peter Harte, like two old men on a park bench. 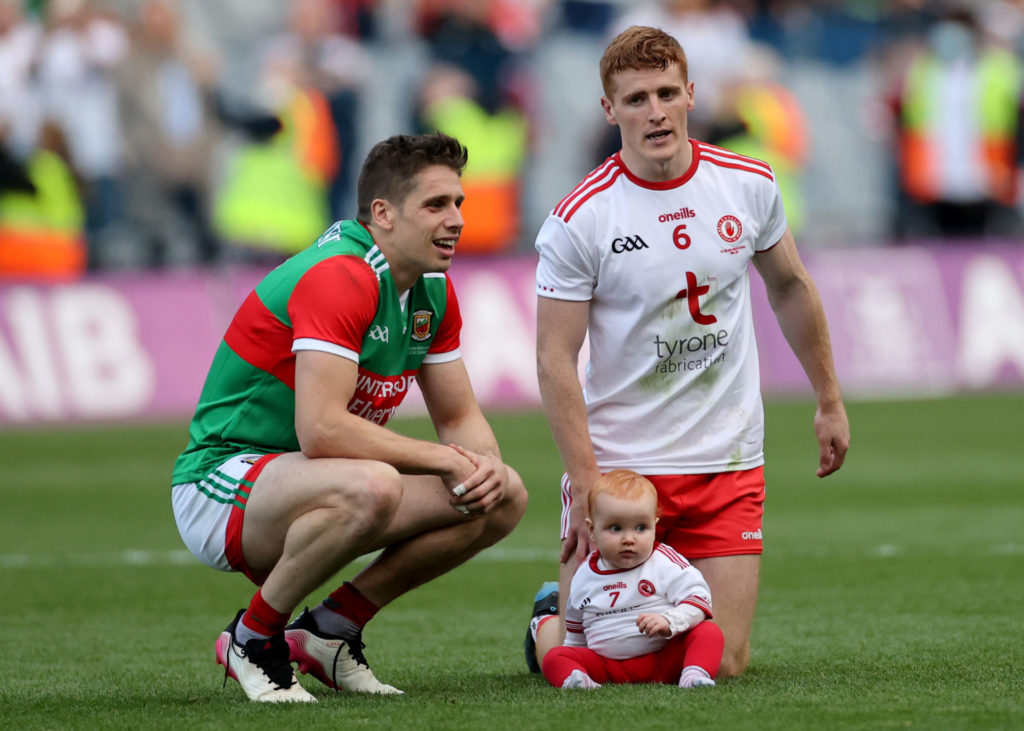 Keegan would have been forgiven for wanting to escape into the Dublin night beneath a baseball cap. But he didn’t. He always has time for opponents, especially at moments when he’d be expected to be vulnerable in the aftermath of defeat. While many of his teammates and fellow county folk came to terms with another loss though, he didn’t have the look of a person overwhelmed with misery. The smile seemed genuine. Clearly, the Westport man isn’t somebody that has issues putting results into perspective. And maybe it’s easier for him, too. He didn’t grow up like many other Mayo youngsters dreaming of one day leading his county to All-Ireland glory. Rugby and cricket dominated young Keegan’s life. His childhood fantasies probably involved walking out in front of a packed Lansdowne Road or Lord’s.
“I didn’t really play Gaelic too much growing up, “ he told the Irish Times in 2016. “To be honest, I had no interest at all in it.” And yet, he has been one of a few that has always turned up for his county on the biggest day in the calendar, and another tour de force from the defender on Saturday has surely cemented his place as the best player never to win an All-Ireland medal.
So maybe therein lies the crux of the issue for Mayo and their 70-year quest to end the famine: they simply want it too much. Maybe they’re too dazed by it all, too hungry for a title, when at the end of the day the final is just another game. All things considered, it is not all that important.
Maybe Keegan has the right attitude. Maybe if other players had a similar outlook to Keegan, or a similar upbringing devoid of a fascination with the Sam Maguire Cup, we’d have seen more individual performances like his on the biggest day. But too often Mayo players seem in awe of the big September occasion, with last weekend’s loss being the worst example of such yet.
Apart from Keegan, only Stephen Coen can truly be happy with his own individual performance, producing his best display in a Mayo jersey at senior level to date. He confirmed what most have suspected since 2013: that he’s a senior captain in waiting. But although he’s a serial winner, a rare find in Mayo these days, inspiring his county to All-Ireland senior success may prove a step too far. Whatever the post-mortem of this loss reveals, it’s difficult to see Mayo returning to another final any time soon. 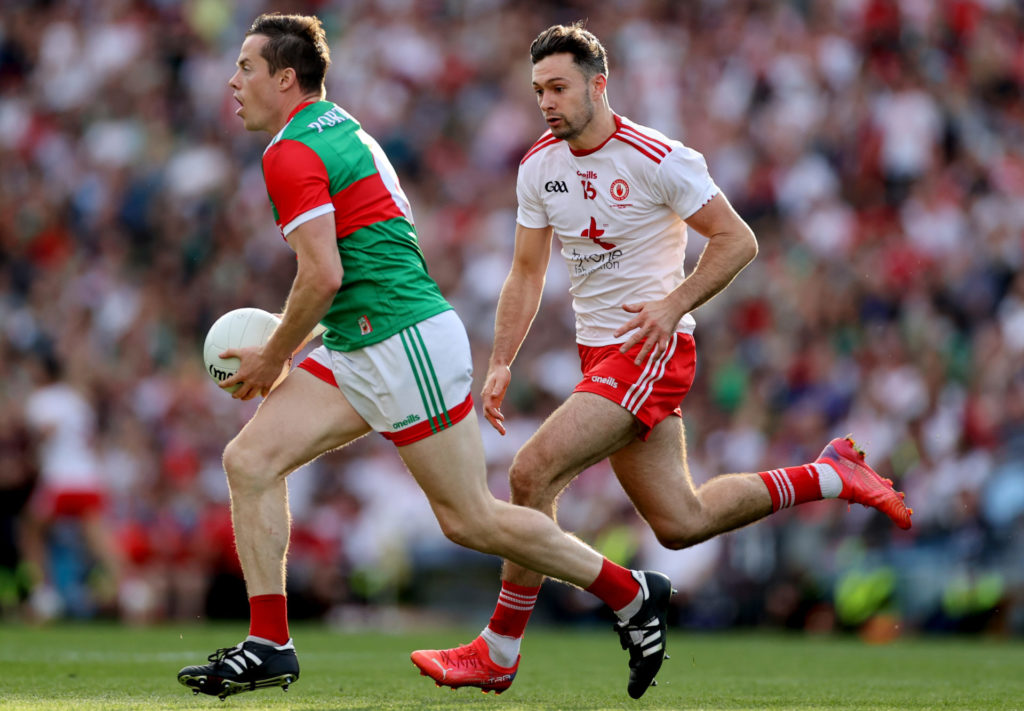 Stephen Coen breaks out of defence for Mayo past Conor McKenna of Tyrone. Picture: INPHO/James Crombie

Through all the heartbreak of recent decades, Mayo fans have been noted for retaining some sense of pride in their own team’s performance following All-Ireland final defeats. Even when the side had been on the end of hammerings at the hands of Kerry, there was always some acknowledgement of the side going above expectations by getting that far.
But as the Westerners shuffled out of Croke Park following their eleventh loss since 1989, you could sense that pride finally beginning to wither. This wasn’t a Mayo performance to be proud of. The 2021 final has replaced 1997 as the one that truly got away. Had both teams performed to the potential they had shown throughout the year, Mayo should have comfortably seen out the game. Had Mayo performed to the level of Coen and Keegan, they no doubt would have banished their demons.
Mayo have been shot in the foot before – by referees, by phenomenal teams, and some would say by supernatural forces – but on this occasion, they took aim at their own feet. For much of the first half, Mayo looked like a side in a challenge game while their opponents knew they were playing in the biggest game of their lives. And yet, Mayo only went into the break two points down. Much cause for hope.
The second half would alas prove to be a worse affair with Mayo losing all composure when it mattered most. At least two goals and five points were left out on the pitch after the interval. And a team failing to take that many chances in a final never climbs the steps of the Hogan Stand.
This was a very good Tyrone team. But the final was as much lost by Mayo as it was won by Tyrone.
So, what next?
It has always been assumed that Mayo play two foes in All-Ireland finals: the opposing team and a psychological barrier. And that barrier has just got a whole lot more intimidating.
In 2012, Mayo were still beginning their journey. In 2013, they came within a point of Dublin in a final for the first time. In 2016 and 2017, it was clear that they were coming up against a very special team and on each occasion they fell just a point short. In 2020, it was a first All-Ireland final for a new side that needed time to bed in. 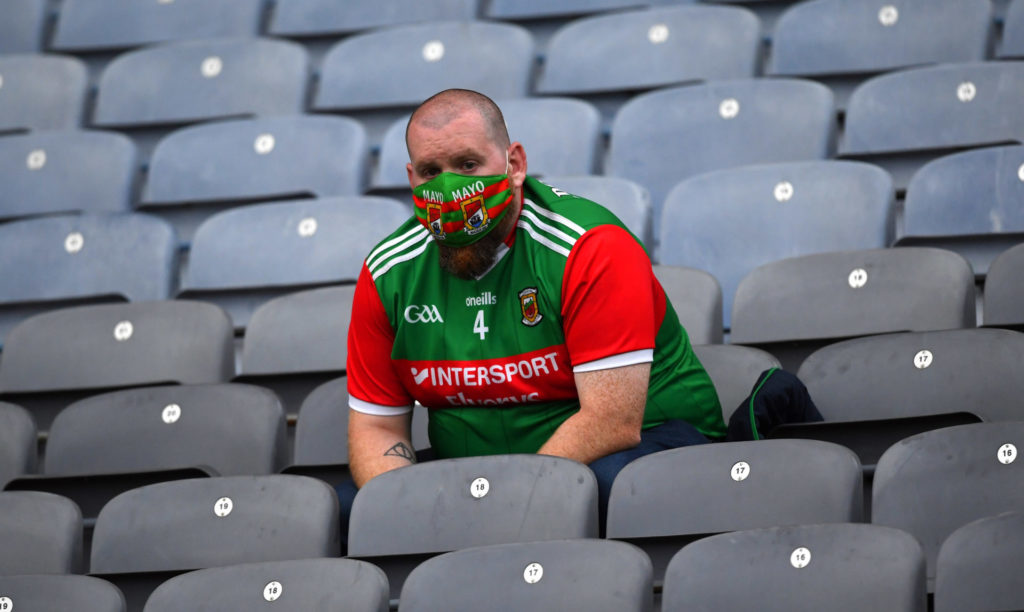 A Mayo fan sits alone with his thoughts in the Hogan Stand after the final whistle in Croke Park last Saturday evening. Picture: David Farrell Photography

But there can be no solace taken from this year’s defeat. Mayo went into the final as favourites against a side with plenty of excuses for defeat – a new management team, Covid-19, a lack of preparation time et cetera – and Tyrone played with all the confidence and hunger of a side that had everything going for them. There can be no excuses for Mayo this time.
Will Mayo fans want to return to another All-Ireland final?
Can they ever go into another final with hope again?
What happens now?
Maybe the county as a whole needs to reassess its own relationship with the quest to land an All-Ireland. Maybe the county as a whole is too hungry. Maybe the county doesn’t actually need to win it all.
Maybe this is the end of the journey. And maybe that’s alright.