Queues of eager readers lined the streets outside bookshops in Dublin city centre as one of Mayo’s most famous citizens, author Sally Rooney, released her new bestselling book. Fast forward a few days and a similar stream of Mayo fans excitedly descended upon Croke Park for what was supposed to be the county’s ‘Deliverance Day’.
Rooney’s new novel is called Beautiful World, Where Are You? After another chastening All-Ireland final experience, Mayo supporters must have the exact same question. 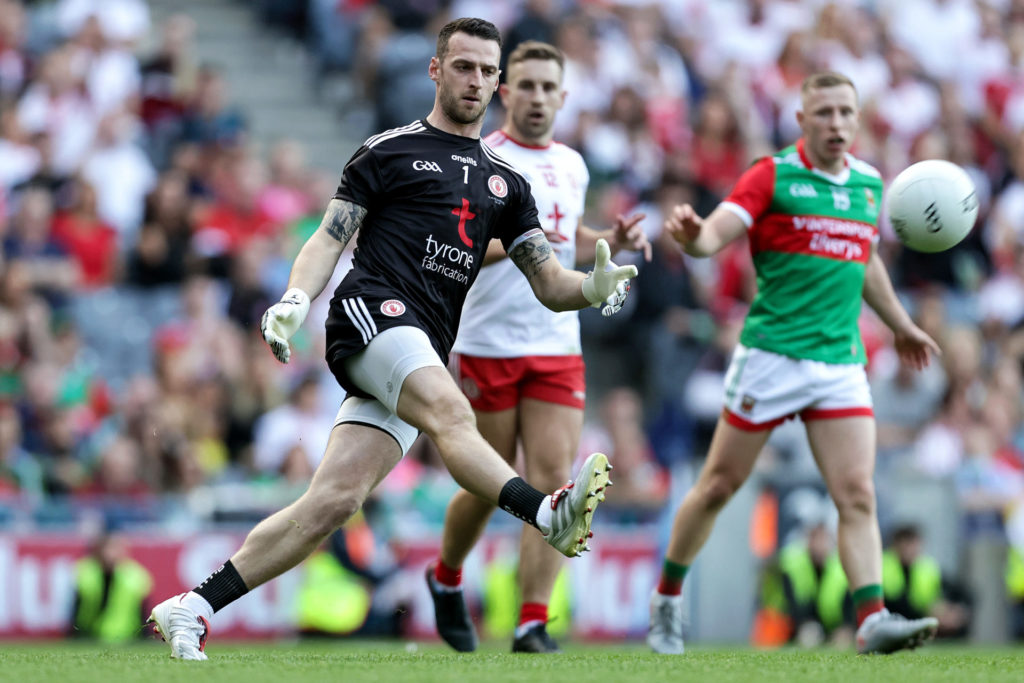 It is easy to be wise after the event but I always felt that this was going to be a 50/50 match. The Mayo public were more expectant than hopeful in the build-up to the game as they saw this as Mayo’s best opportunity ever to overcome their unfancied final opponents. Be that as it may, Tyrone were waiting in the long grass and relished the role of underdogs and villains of the piece.
Was the county’s over-confidence warranted? Tyrone had to beat three recent Ulster Championship winners and Kerry in a dangerous and challenging route to the All-Ireland final and were improving with every game. Although annihilated in Killarney in early June, the Red Hands finished the year without conceding a goal in Croke Park in the Ulster final, All-Ireland semi-final and All-Ireland final. Championship-winning form.
Notwithstanding Tyrone’s ominous recent improvements, Saturday’s match was Mayo’s worst showing in an All-Ireland final for quite some time and certainly the team’s most underwhelming and uninspiring final performance under James Horan.
Mayo craved a good start and that is exactly what they got. After the demoralising concession of early goals in the finals of 2006, 2012, 2017 and 2020, Mayo needed to hit the ground running so that a county and its players could believe that this was finally the day. Tommy Conroy stroked over a beautiful score inside 15 seconds after powerful work from the throw-in by Aidan O’Shea and when Ryan O’Donoghue nailed a tricky free, after a botched short kick-out from Niall Morgan, everything looked to be going swimmingly.
Indeed, it was seven minutes before Tyrone would raise a white flag when Morgan converted a free from miles out. After a shaky enough start, what transpired thereafter was highly impressive from the Ulstermen. Mayo owned the ball for large parts of the match but huffed and puffed and always found it difficult to come by scores easily. On the other hand, Tyrone’s efficiency and control with the ball was phenomenal. Both teams had 19 shots from play. Tyrone scored 2-8 from their 19, Mayo scored 0-7 from theirs.
Tyrone’s economy with the ball and defensive meanness should not have come as a surprise to anyone. In the 79 minutes of normal time in the semi-final against Kerry, Tyrone garnered 2-11 from 20 scoring opportunities, while Kerry posted 0-17 from 35. Mayo fell into the same trap as Kerry had done two weeks previously by winning ample possession around the field but lacking a conviction and clarity of thought when in the final third. Tyrone conceded the short kick-outs to Mayo with Robbie Hennelly finding his man 21 out of 22 times (Kerry won 23 out of 23) but we ran out of ideas when advancing into their 45. Tyrone got numbers back, got their match-ups right, defended well one-on-one and hit hard. But Mayo were rash, impatient and wasteful in the scoring zone. 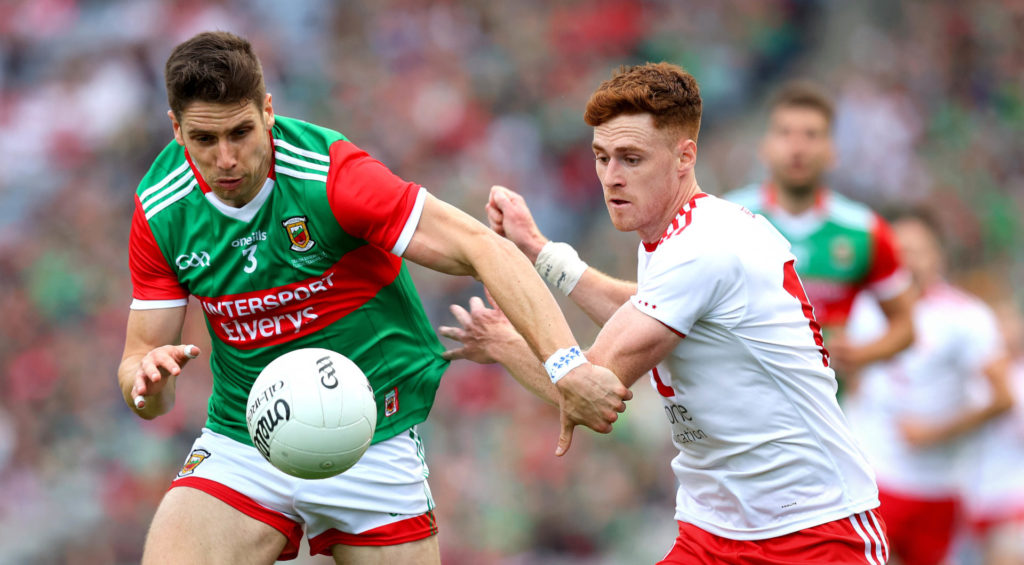 In Niall Morgan, Tyrone had the game’s dominant personality and my man-of-the-match. Morgan was setting the tone at both ends of the field. His free-taking was exemplary and his general playmaking from inside his own half was a revelation. While Mayo’s press made some short kick-outs uncomfortable for the Edendork man, he adapted well and launched quite a few over Mayo’s pressing wave. Against Kerry, Tyrone had struggled enormously on long kick-outs for and against but on Saturday evening they had a massive uptick in possessions won from Morgan’s missiles.
Morgan aside, Tyrone had sterling performances all over the field. Conor Meyler and Peter Harte are total footballers who showcased their class in every corner of Croke Park. Padraig Hampsey gave a real captain’s display. Tommy Conroy threatened to explode into life at stages but Hampsey remained unflappable, strong and focused and ensured that Conroy was only really a peripheral figure in proceedings. Hampsey’s forceful ball-carrying out of defence was also superb. Mayo had some good ball carriers from the back too but their final ball or decision-making wasn’t as clean or crisp as the Tyrone captain’s.
In midfield, I was certain Mayo would have the edge but Conn Kilpatrick stifled Matthew Ruane’s huge threat. Kilpatrick was dominant on land and in the skies and is the find of the season. Darren McCurry has always been one of the most skilful and accurate forwards in the game. He has the sweetest strike of the ball and if you give him an inch, he’ll take a mile. Mayo just could not get to grips with him and the ace marksman was a constant threat. Niall Sludden is another lovely footballer whose ball skills are as neat as a pin.
As was expected, Tyrone’s bench made a notable impact. Apart from his expertly improvised goal, Cathal McShane was well marshalled by Oisín Mullin. Darragh Canavan, Ben McDonnell and Paul Donaghy, however, all made hugely significant and positive impressions. Unlike in previous games, Mayo’s subs could not affect the outcome at all.
It was not for a lack of trying or effort but too many Mayo players did not reach their usual performance levels and were subpar. Lee Keegan, as usual on the biggest stage, was heroic. His record in finals is awesome. As well as shutting down some of the game’s greatest attackers, he has now scored in five of the seven All-Ireland finals he has played in, amassing a handsome sum of 2-04. Most forwards would be extremely proud of that haul! 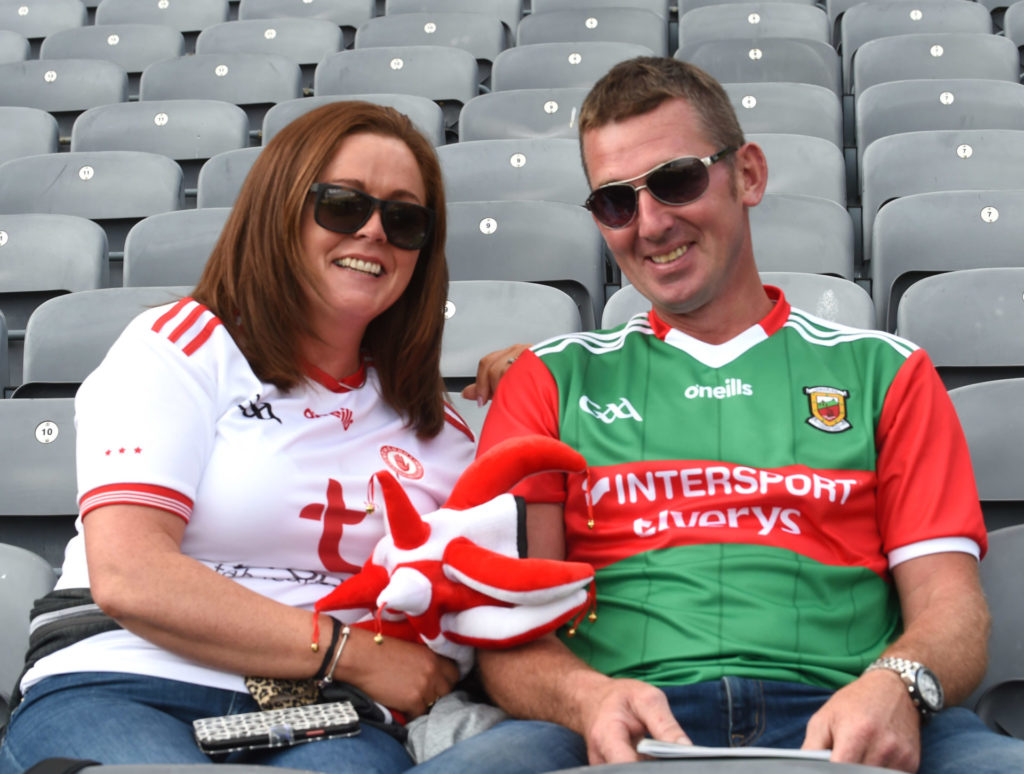 The game looked done when McCurry palmed in his second-half goal but just 40 seconds later Keegan surged forward and dissected the posts with an outrageous faded strike. And just 40 seconds later again Keegan burst through the heart of Tyrone’s defence to win a free in front of the posts in another show of defiance. The boon of Tyrone’s beautifully crafted goal was almost fully wiped out in 80 seconds of valour and virtuosity from one of Mayo’s all-time greats. Given his consistent top-level performances when it matters most, he must wonder what he has to do to win the game’s biggest prize.
Although usually working under the radar in a solid, rather than spectacular, fashion, Stephen Coen took his performance to another level. He did not give Mattie Donnelly a sniff and successfully won that duel with Donnelly substituted just after half-time. Coen has always been a functional and consistent player who could reliably do a disciplined defensive job for the team but he has added an attacking threat to his game which has seen him become a fine all-round player. Like Keegan, he kicked a beauty of a score in the first-half with the outside of his boot when others around him were toiling as they tried to find their range. Robbie Hennelly also capped a good year with a solid final display and should be proud of his endeavours.
In spite of Tyrone’s superior tactical and technical display, and their remarkable physicality and conditioning, Mayo still missed a number of gilt-edged chances which could have altered the course of the game. A missed penalty in losing an All-Ireland final will always sting and leave everyone with a feeling of “What if…”. Mayo, however, were never really at the pitch of the game and the flatness of their display gave an air of inevitability to the result long before Joe McQuillan blew his final whistle.
And so, life must go on. Jurgen Klopp once sagely remarked that “football is the most important of the least important things”. Life always seems that bit greyer in the aftermath of an All-Ireland final loss but our usual sparkle and verve will resurface once the club championship returns in the coming weeks. Sport will get us through the winter.
The better team won last Saturday evening. It wasn’t meant to be. Onwards and upwards.