Out-thought, out-fought, bullied and, unpleasant as it feels to say, clueless as well.

Those were my overriding thoughts on the road home from Croke Park last Saturday, as we all tried to comprehend the Mayo performance we had just witnessed. 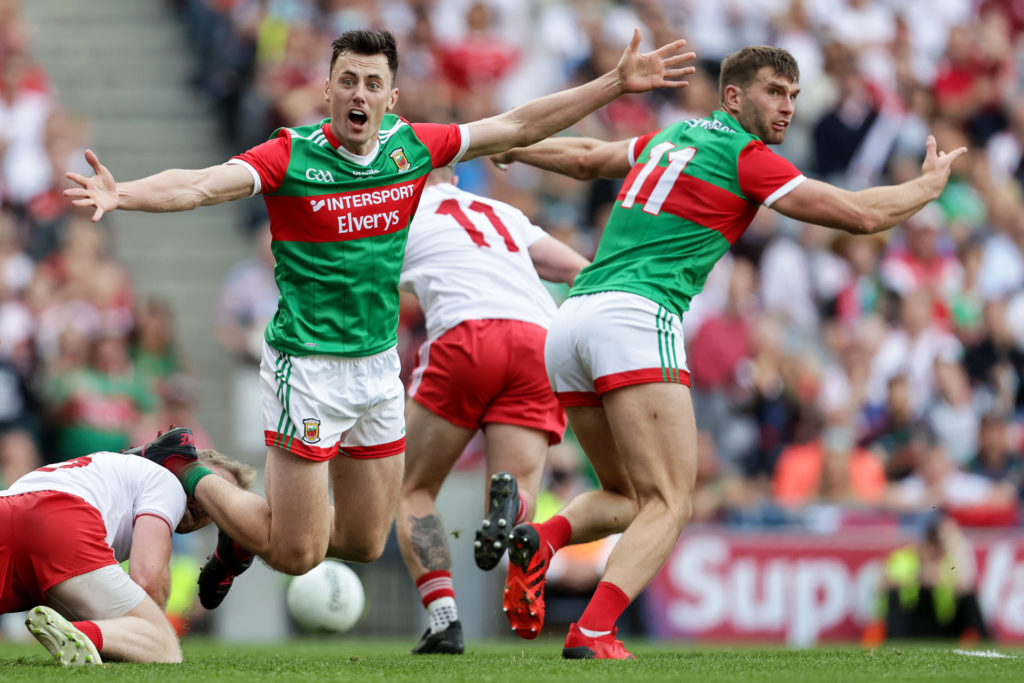 I indicated my fears for how Tyrone’s style might impact on ours in my pre-final column but never did I think this Mayo team could be so naïve as to approach this game the way they did. And worse again, to never waver from that style when for so long it was apparent it was ineffective.

Anyone who had watched Tyrone’s All-Ireland semi-final win against Kerry would have identified the single most important thing to avoid was taking the ball into contact and yet that’s precisely what Mayo players did continuously.

We needed something different and I genuinely thought with all the experience we have accumulated, in particular at management level, that there would be a well-orchestrated offensive plan for how to negate and nullify some of Tyrone’s best attributes. Maybe I’m wrong but I certainly couldn’t see one.

Tyrone played with their heads up, they dictated the play and pulled us this way and that way, by playing long ball, by playing short ball, yes, by carrying at times, but above all by mixing it up – something we stood guilty of failing to even try.

We’ve heard James Horan so often talk about learning the lessons and moving on but the problem is that we appear to be learning very slowly, if at all. At times against Tyrone we actually looked clueless and bereft of any idea as to what to do.

I had flagged it last week, about how All-Ireland finals take on a different dimension and that you need to have an offensive plan in particular. We were the team who should have had the real know-how and the tactical nous because of our experience of six finals since 2012, but there was very little sign we had any of that – and we have paid a massive price as a result.

It actually looked as though Tyrone were that team with all the experience because the number of times that Mayo players carried the ball into a tackle or took an extra solo rather than give a kick pass, only to end up corralled into an alley and dispossessed, was the complete opposite of how Brian Dooher and Feargal Logan’s team approached the game. Yes, Tyrone men made plenty of mistakes but very rarely were their players getting caught up in the same sort of trouble as ours.

We knew – or, at least, should have known – exactly what we were going to get from Tyrone from the point of view of intensity, their ability to tackle and to funnel players back. It meant our play was crying out for a different dimension and I fervently believe Aidan O’Shea offered us that but was a massively underutilised resource.

We planted him where he should have been, at the edge of the Tyrone square, but it was painful to see how seldom his teammates out the field manufactured or availed of the chance to kick ball towards him. From my seat in the Cusack Stand I saw numerous opportunities in the first half where Aidan had gotten himself into one-on-one situations, and with his height advantage you were crying out for the ball to be delivered his way because in fairness to him, he was winning most of the little that had been sent his way.

He had taken on Ronan McNamee in advance of a foul on Tommy Conroy that resulted in Ryan O’Donoghue pointing a free, O’Shea himself was wrestled to the ground by McNamee for O’Donoghue to score another free, and it was O’Shea’s offload that released Padraig O’Hora for the foul that saw O’Donoghue kick his fourth free of the first half. 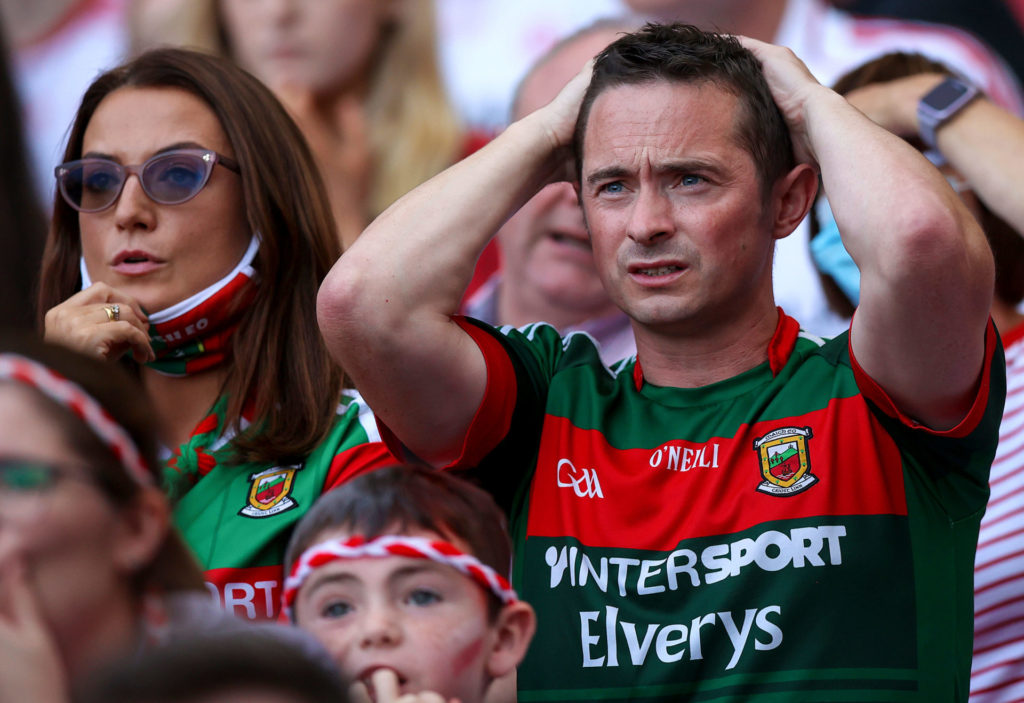 Yes, Aidan had a bad wide, he missed a goal chance, and he appeared to be low in confidence, but still he only needed one moment to go right and it would have given a different dimension to Mayo’s attacking play. It didn’t help that Kevin McLoughlin was strangely positioned in the full-forward line when he’s the one man with the sort of passing ability around the middle third to pick out O’Shea.

Too often, however, when McNamee was isolated on O’Shea inside, and when it was crying out for the ball to be kicked in, a Mayo player would just turn away from goal and solo back.

Contrast all that with how Tyrone, again mixing things up, made use of their own target man when springing Cathal McShane early in the second half. Within two minutes of his arrival at the edge of the Mayo square, there was a one-on-one created, a looping 35-yard pass from the wing by Conor Meyler and with one flick of the hand, McShane’s first touch of the ball, it was in the back of our net. How many times have we been undone by that over the years?

Mayo simply had to find an alternative to their running game and as far as I am concerned, Aidan O’Shea was the ideal option that they never exploited.

Some Mayo fans may argue that the result could have been different if the team had taken any one of their several goal chances. You can talk about all the ifs, buts and maybes you like, but Tyrone had two excellent goal chances too don’t forget, with Robert Hennelly saving once from Darren McCurry and from Darragh Canavan much later in the game.

It is true that we didn’t show enough composure in front of goal but from an early stage I felt that Tyrone had a much better idea of what they were about, that they were there on a mission, and that they were there to win the game whereas Mayo were playing off-the-cuff. Don’t get me wrong, that worked brilliantly for us from around the 61st minute of the semi-final against Dublin, but all it did was lure the team and management into a false sense of security that it would work again. Not against a team like Tyrone; they had their homework done, they went man to man, they double-teamed the runners, ran us into corners and picked the ball off us on so many occasions. And behind it all, their best player was their goalkeeper.

I thought Niall Morgan was phenomenal, the architect of so much of what Tyrone did well. Stephen Cluxton in his heyday couldn’t deliver the ball as long as Morgan; he overshot our press on so many occasions and Tyrone’s second goal was a prime example. Caught by Conn Kilpatrick, Lee Keegan had to leave Darren McCurry to try and put off the midfielder but with Hennelly off his line, that left McCurry with a simple tap in. 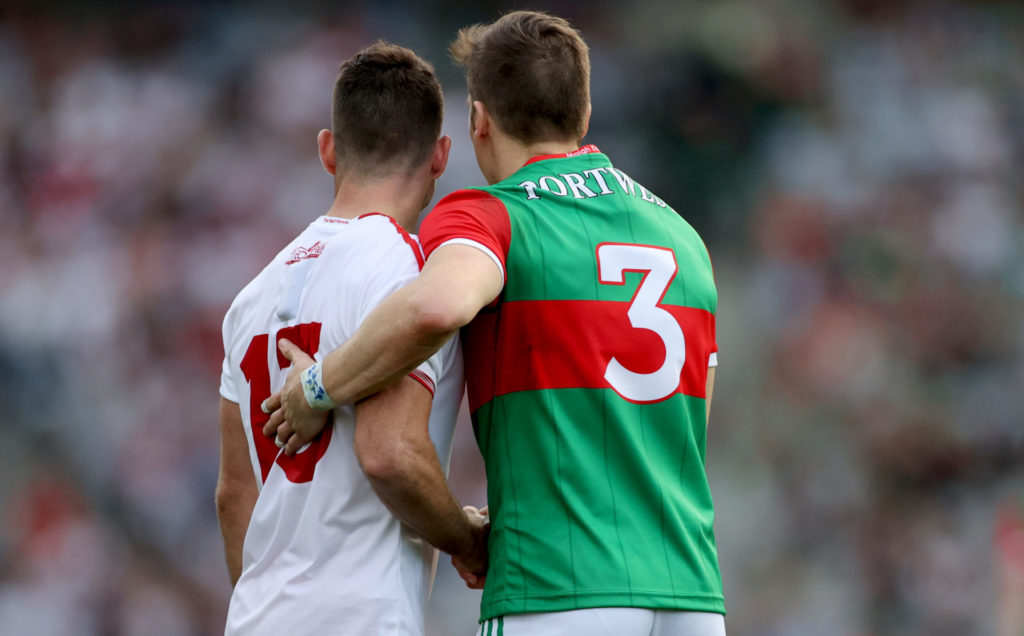 Tyrone’s Conor McKenna and Lee Keegan of Mayo shake hands in the closing moments of the game. Picture: INPHO/James Crombie

It was obvious early on that Morgan was causing us trouble so rather than continuing to press him, Mayo might well have been better to concede the kick-outs altogether, let Tyrone have the ball and get ourselves set-up properly in defence. I think we’d have had a lot better chance that way because as it was, Morgan was taking seven or eight of our players out of the equation every time.

Finally, the question must be asked about the roles of several of the Mayo substitutes and why they were not used. Did management not trust them? Was Colm Boyle not worth a few minutes to see could he bring something? If he wasn’t, he shouldn’t have been there, but after Enda Hession replacing Michael Plunkett in defence at half-time, Jordan Flynn was the only player introduced to the middle third and he had little or no impact, while Darren Coen was introduced to a forward line to facilitate moving Aidan O’Shea out to the middle where he, too, was effectively lost. What was James Carr expected to achieve being introduced four minutes into injury time with the team six points in arrears.

We had nothing compared to the huge bounce that Tyrone got from their bench, through McShane and Canavan in particular, and Ben McDonnell.

This latest set-back is very unfortunate for Mayo football in general, because there are some brilliant young footballers there, and some brilliant older footballers there too. Lee Keegan was phenomenal. To think at nearly 32-years-old, and the mileage he has on the clock, that he was the player doing more than anyone to take the fight to Tyrone, speaks volume about his character.

Sadly, it all just feels like one big opportunity missed by Mayo. Again.