Mayo and Tyrone is a true novel All-Ireland Final pairing in that of the 134 finals in the history of the competition, the two counties have never faced off in the main event.

Mayo and Tyrone have, however, played one another on five occasions in the championship and the Connacht champions have come out on top four times against the Red Hand. Quite notably, every time the two teams have played, the winner has ended up in the All-Ireland final for that year. Now they face off to decide the overall champion, in what will be their sixth clash in the All-Ireland Championship inn32 years tomorrow.

Four Mayo managers, including the incumbent James Horan have tasted one win apiece over Tyrone with Horan guaranteed immortality should he mastermind a second this weekend.

Here is a whistle-stop look at the past encounters between this year’s finalists. 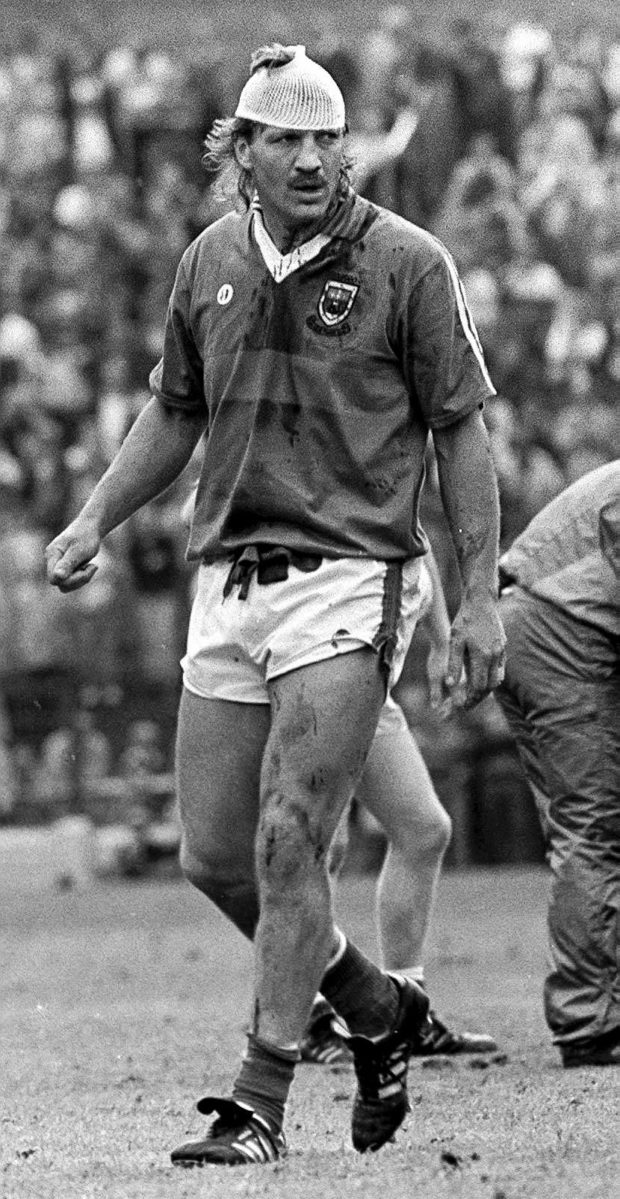 13 August 1989; Willie Joe Padden bandaged up during the GAA All-Ireland Semi-Final match between Mayo and Tyrone. Photo by Ray McManus/Sportsfile

Mayo roared into their first final since 1951 with a three-point victory over Tyrone at Croke Park. Despite the result in 1989’s final, this result nonetheless marked the end of a spell of three semi-final defeats in the 1980s, in 1981, 1985 and 1988.

Michael Fitzmaurice led the charge for Mayo with six of their scores while Dermot Flanagan, Sean Maher, Liam McHale, Noel Durcan, Kevin McStay and substitute Brian Kilkelly all chipped in with a point.

This game is also known for Ray McManus’s famous photo of Willie Joe Padden drenched in blood and decked out in a bandage. The Belmullet man looked as though his day was done when he was taken off after taking a boot in the head but a quick trip to the repair shop and the blood-spattered Willie Joe was back in action once more.

Mayo trailed the Ulstermen by two points with ten minutes to play but Padden’s return to play and the introduction of Brian Kilkelly and Greg Maher marked a turning point for the Green & Red. Noel Durkin popped over an equaliser and it turned into an uphill battle for Tyrone, who fell to further scores from Kilkelly, McStay and Fitzmaurice.

Champions are left stunned by gallant Green and Red 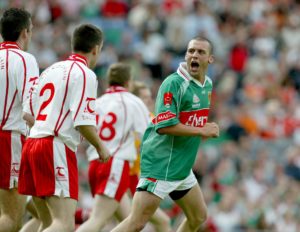 It was heralded as one of GAA’s real great giant killings. 2003 All-Ireland winners Tyrone came into this game as hot favourites but were overcome by a generational Mayo team who were on their way to the first of two finals in three years.

Despite Stephen O’Neill netting one of the finest goals that was ever fired towards Hill 16, Mayo showed no signs of getting rattled by their opponents in Croke Park. They stuck to John Maughan’s gameplan and won by a four-point margin.

This was one of the finest games that the midfield pairing of Ronan McGarrity and David Brady played for Mayo as they dumped out the reigning All-Ireland Champions on their way to the final against Kerry. Brady kicked three points from play while McGarrity also kicked one. McGarrity was given the task of tracking Sean Cavanagh but rose to the challenge and kept the dangerman off the scoresheet. Current Tyrone co-manager Brian Dooher was also in action that day but found his impact limited with the close eye Peader Gardiner kept on him.

Alan Dillon also had one of his finest hours in a Mayo shirt, kicking six points against Tyrone. Also on the scoresheet for Mayo was Ciaran McDonald (0-1), Conor Mortimer (0-3) and his brother Trevor (0-2). 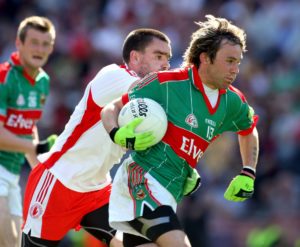 The back door was slammed shut during Tyrone’s only victory over Mayo in the Championship to date. This is generally considered to be one of Mayo’s worst All-Ireland performances in the 21st century as t/hey bowed out of the competition against a Tyrone team who looked very beatable on the day.

The attendance was markedly low, just over 27,000, which seems a luxury for these Covid times, and neither side showed what could be considered a ‘Croke Park’ performance.

Mayo were three clear after points from Conor Mortimer, who also chipped in with a goal during the game, 10 minutes into the second half but suffered from a series of squandered chances and close range wides. They failed to raise a white flag from Mortimer’s score on the 47th minute to the 64th minute.

Tyrone meanwhile, finally got moving and scored their first point of the second point with it 16 minutes old and over the next ten minutes, hit five more scores to take control of the game. They had been poor throughout and hit a number of poor wides themselves.

Billie-Joe Padden scored 0-2 for Mayo, while Alan Dillon also chipped in with 0-3 with Mortimer contributing the bulk of the scores for the Green & Red (1-4).

It all came together for the Red Hand at the end of that campaign. They ended the year as the All-Ireland champions for the third time in the 2000’s, beating Kerry in the final. 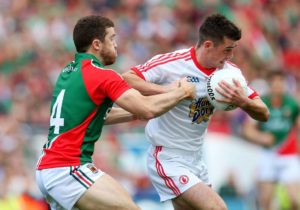 Mayo stood in Tyrone’s way once again at the semi-final stage, 24 years on from their 1989 encounter, at Croke Park with a six-point victory over the O’Neill County.

Despite trailing by a point at halftime, Mayo outscored the Ulstermen by 1-10 to six points in the second half and showed the levels of intense, lung-busting acceleration now synonymous with how James Horan has the current Mayo team playing. Enda Varley leveled up the game with two minutes played in the half.

Alan Freeman then netted a penalty four minutes into the second half and from this point, Tyrone were left chasing Mayo who ran away into their second All-Ireland final in two years. It marked a big turnaround from a first half where Mayo didn’t score from play until the 32nd minute of what was Mickey Harte’s 200th game in charge of Tyrone.

Freeman tallied 1-4 for the game, while Chris Barrett, Lee Keegan and Alan Dillon scored 0-2 each. Robbie Hennelly, a long-range free, Aidan O’Shea, Kevin McLoughlin, Cillian O’Connor, Enda Varley and Cathal Carolan were all good for a point as well, setting Mayo up for another crack at ending the famine.

Earlier that day, the Mayo minors advanced to their own All-Ireland final where they triumphed against Tyrone. 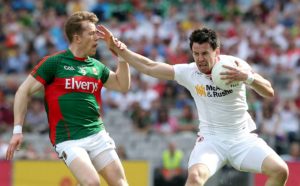 Cillian points the way to victory

Five years ago, Mayo beat Tyrone in the most recent championship clash between the two sides at Croke Park. They carried in some serious momentum having come through the backdoor to face that year’s Ulster Champions, but the Red Hand posed a greater challenge than any they previously faced.

The sides went in level at halftime with Cillian O’Connor hitting four for Mayo and Mattie Donnelly with three for Tyrone. The game took a big swing in Mayo’s favour when Sean Cavanagh received a second yellow with the sides locked level.

Lee Keegan’s point in the 65th minute proved to be the winner but Mayo almost paid the price for keeping possession and running down the clock instead of searching for further scores as Niall Morgan and Darren McCurry both sent chances wide in the closing minutes.

O’Connor ended the game with 0-7 to his name, while Keegan scored 0-2. Colm Boyle, Aidan O’Shea, Andy Moran and Tom Parsons were also on the scoresheet for Mayo in a narrow win.