If us Mayo fans don’t like Tyrone much, it’s time we asked why 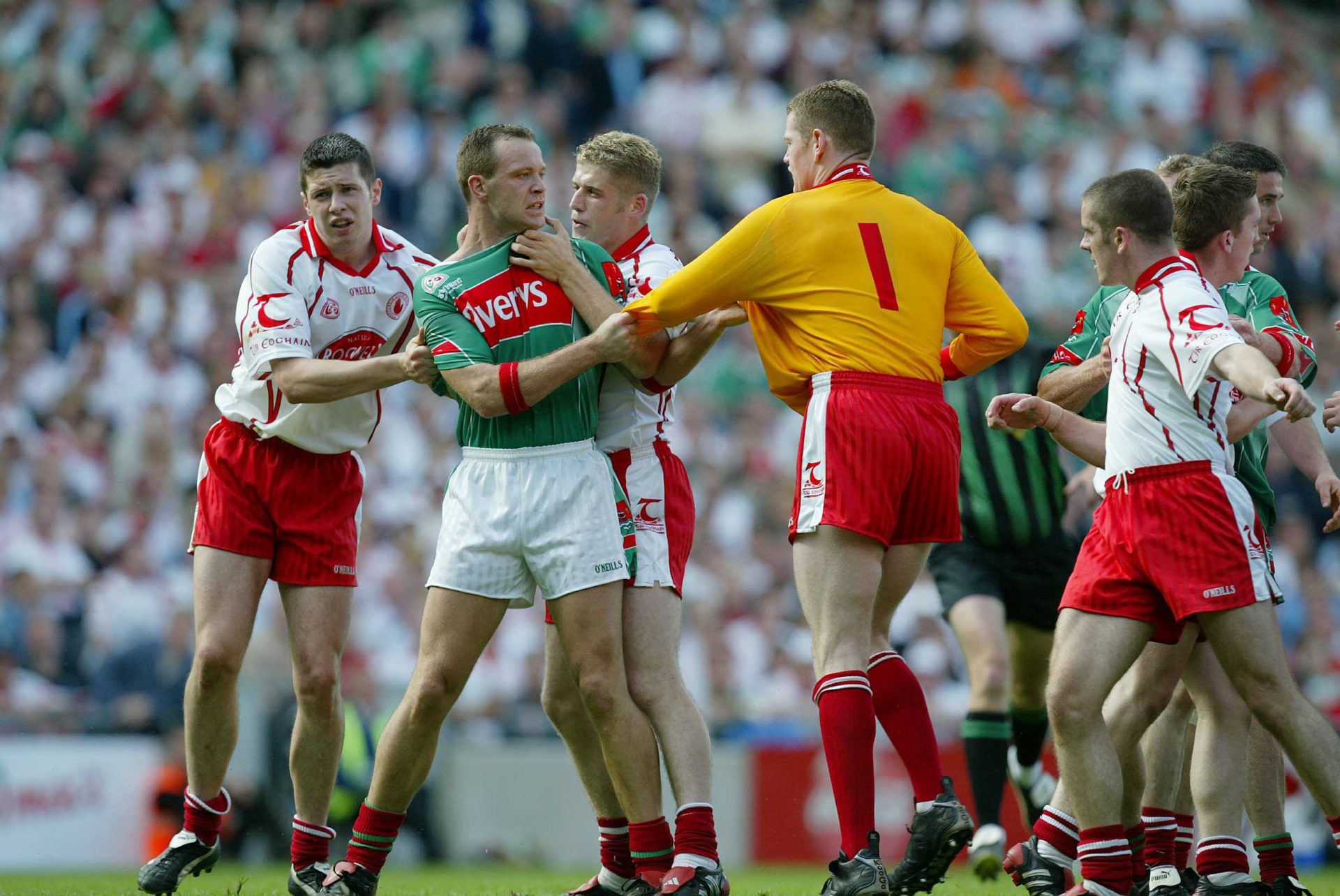 David Brady squares up to Tyrone players, including Pascal McConnell, Kevin Hughes and Sean Cavanagh, during Mayo’s 2004 victory over the then All-Ireland champions. Picture: INPHO/Morgan Treacy

Tyrone are to 21st Century GAA what Millwall FC were to late 20th Century soccer in England. One of the famous chants at Cold Blow Lane, Millwall’s then home ground, was “no-one likes us, we don’t care.”

There’s the same sense of angry defiance about Tyrone. In some old Eighteenth-Century battle, with the cannon roaring but shot running low, it’s not hard to imagine these men climbing into the cannon themselves and demanding to be hurled at the enemy, the better to get stuck into them.

Tyrone weren’t always like that. The Tyrone team of the eighties, the one that contested the 1986 All-Ireland Final and lost the ’89 semi-final to Mayo, had a touch of glamour about them. It was easy to imagine Plunkett Donaghy standing at Errol Flynn’s shoulder in some old pirate swashbuckler, cutlass at the ready, long blond hair blowing in the wind.

Peter Canavan had arrived by the ‘90s, and all of Tyrone’s effort was to get Canavan the ball. Canavan’s scoring of all but one of Tyrone’s total in the All-Ireland Final of 1995 shows the sense behind that plan, but it wasn’t enough.

Whether or not it should have been enough is debatable. Art McRory, who was Tyrone’s co-manager at the time, made some intemperate remarks after the game, but withdrew them afterwards, being a sportsman and a gentleman. It’s unlikely anyone has ever forgotten them, though.

Mayo could have met Tyrone in the 1996 All-Ireland Final. Mayo had already beaten Kerry in the first semi-final, and Tyrone, having retained the Ulster title, faced Meath the following Sunday. Peter Canavan was stretchered off in the first half of that game, and Brian Dooher, current co-manager, had his head stood on. Meath marched on to the final while Tyrone went home, in buses and ambulances, as appropriate.

Was it that game against Meath that made Tyrone who they are? Did they decide that, from there on in, they were getting their retaliation in first? 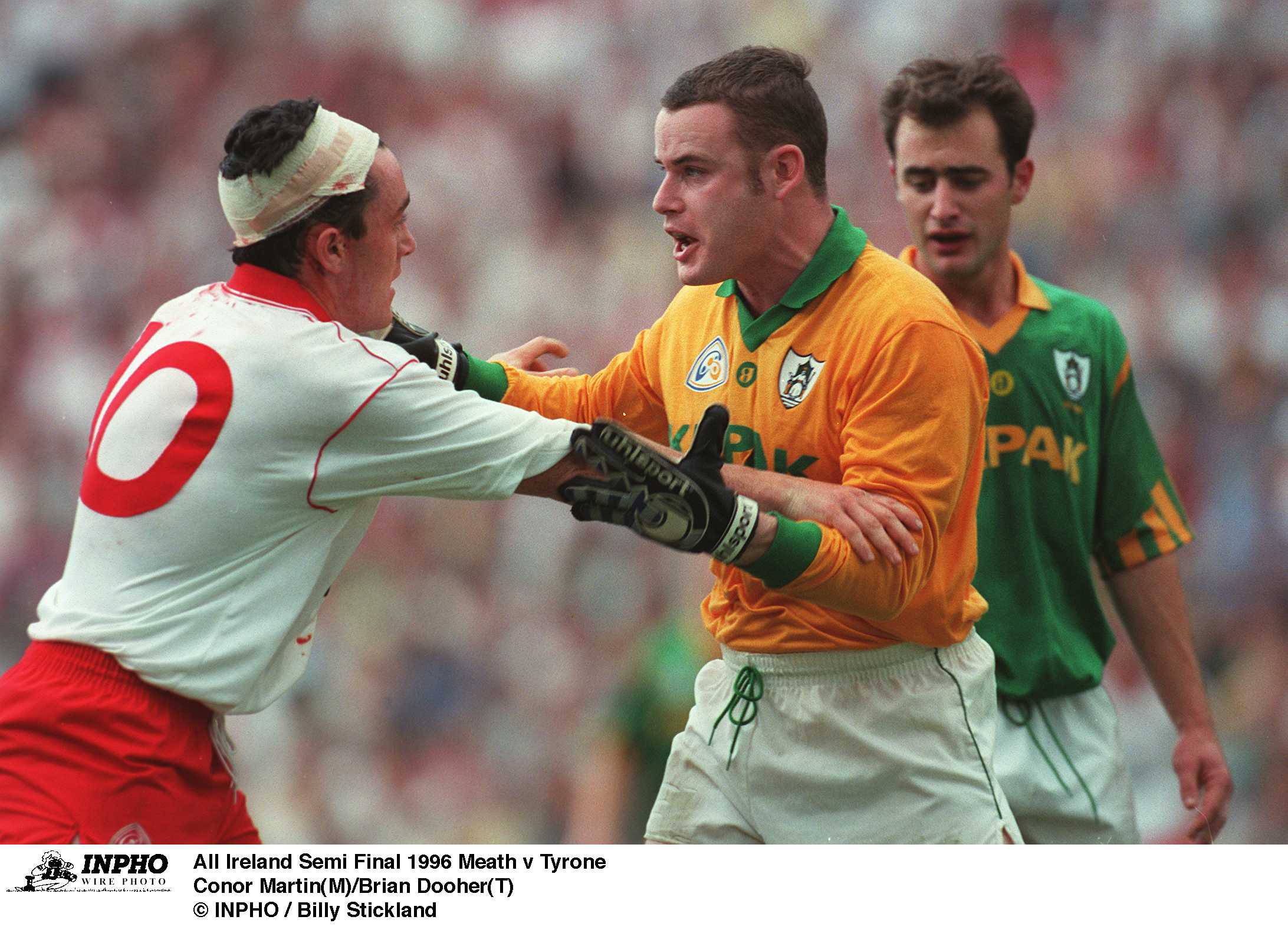 Your correspondent met Ryan ‘Ricey’ McMenamin, Tyrone’s Michelangelo of the dark arts, at a game in Croke Park a few years ago. For reasons too boring to explain, I stuck the paw out and told him that I had admired him as a player. He looked at me funny, and it struck me: How often has anyone said to Ryan McMenamin that they liked to watch him play? McMenamin didn’t play, as such. His role was to stop people playing, any which way he could.

Ryan McMenamin was one of those players whom you think the very devil when he plays for their crowd but a great bit of stuff when he plays for your own crowd. You may remember Lee Keegan got some heat a few years ago for lobbing a GPS tracker across the path of Dean Rock when Rock was taking the decisive free in the 2017 final. Ryan McMenamin wouldn’t have lobbed a GPS tracker. Winding up like a baseball pitcher and hurling the thing right into the freetaker’s face would have been more Ricey’s style.

But here’s the point about McMenamin and Lee Keegan, and corner-boys and gentlemen. Immediately after Dean Rock kicked that free in 2017, each of the Dublin full-forwards wrestled his man to the ground, to give David Clarke three fewer options on his kickout.

Now. Any one of those groundings was a black card offence in itself. All three together were an outrage. No card was shown, no free was whistled. Yet the match is not remembered for that piece of rehearsed and practised cynicism by Dublin, but for the ultimately harmless piece of legerdemain by Keegan.

Ger Loughnane, the former Clare player and manager, told his team of the nineties that the referee would not protect them and that they must protect themselves. That, I think, is the lesson Tyrone took from 1995 and 1996. If, bandaged up on the bus back home to the butt of the Sperrin mountains, Brian Dooher made a vow to the moon and stars that never again would another man stand on his head, that would be an understandable oath for him to take.

Nobody would ever mistake Tyrone for the first-year hockey team at Mallory Towers but really, what have they ever done except stop getting pushed around? If the referee was not going to stand up for them, what choice had they but to stand up for themselves?

Tyrone is a fine county peopled with fine football people and fine football players. And in many ways, Tyrone are very similar to the current Mayo team, with that never-say-die spirit and cussedness and will to win. A draw between them is by no means impossible.

For all their fearsome reputation, I don’t think Tyrone people will begrudge Mayo if Mayo win, Mayo having been knocking on the door for so long. If Tyrone win, it would be nice not to begrudge them and clap them off the park. Nice, but impossible.

That level of sportsmanship isn’t in me. I wish it were, but it’s not. Like the man in the song, the years have made me bitter. Tyrone can win their fourth All-Ireland some other time. Mayo need to win their fourth All-Ireland now, right now, and to end that seventy-year wait that hangs over everything like a great black and baleful crow, his mocking caw the last thing we hear at night and the first thing we hear in the morning.

If that means planting Tyrone into the Croke Park turf then that’s just how it’s got to be. Sorry about that, Ricey. You know how it is.