Mayo perform miracles to flush out the Jacks 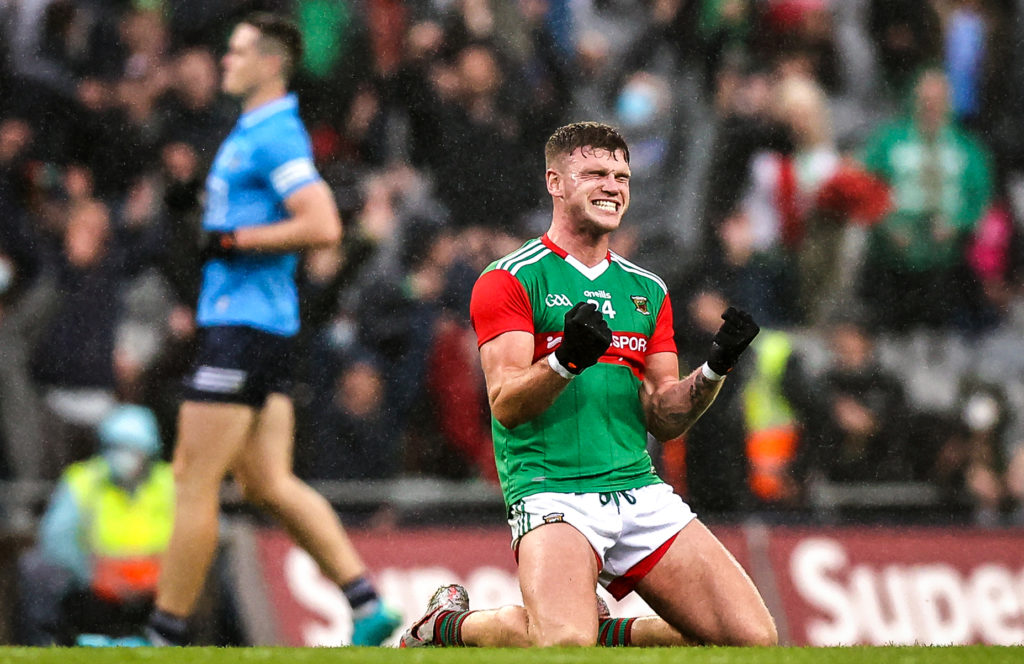 A 0-17 to 0-14 victory after extra-time in Croke Park on Saturday evening has seen the Green and Red advance to another All-Ireland final where at this stage their opposition remains something of a mystery. But more of that anon.

A familiar tale had seemed to be unfolding when a lethargic first-half display resulted in Mayo trailing by six points to Dessie Farrell’s side at half-time. However, on the back of their worst half of championship football against Dublin in many, many years came a second half for the ages. But not content to beat the Blues 0-9 to 0-3 to tie the game at 0-13 apiece by full-time, James Horan’s men restricted their opponents to one single point for the entire extra-time period to crush Dublin’s dreams of seven-in-a-row.

As if to demonstrate their frustration at the stone-wall defiance of the westerners, Dublin had not one, not two but three players dismissed in extra-time on black or red cards, as an empire crumbled before our eyes.

Mayo never really looked at Dublin’s pitch in the first half, allowing the champions to ease into a 0-4 to no score lead inside ten minutes with a converted free from Dean Rock after only 40-seconds followed by singles from play by Ciaran Kilkenny, Rock, and Con O’Callaghan.

It took Mayo until the 12th minute for midfielder Mattie Ruane to open their account but missed frees by Ryan O’Donoghue and Diarmuid O’Connor, a poor miss from play by Aidan O’Shea and an even worse one by the captain from a 13-metre mark sapped confidence. 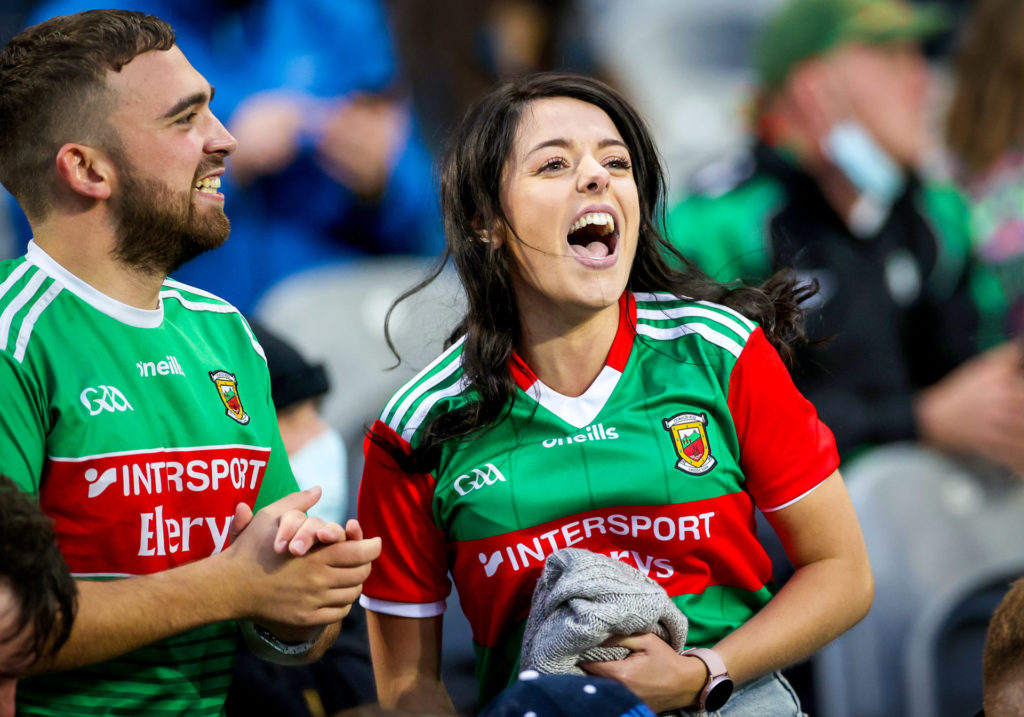 Mayo fans celebrate as Tommy Conroy puts over another point in the first half of extra-time.

Ryan O’Donoghue had better joy from his own mark but Dublin reached the water-break 0-6 to 0-2 ahead as Kilkenny and Rock, a free, added to their tallies.

Mayo goalkeeper Robert Hennelly was having mixed fortunes with his kick-outs and Dublin were able to grow their lead, moving seven points clear by the 29th minute before Hennelly ventured forward to drive a 47-metre free between the opposition’s posts.

Mayo manager James Horan made his first change, introducing Enda Hession for Darren McHale, but by half-time it was already looking an uphill task for his side as the Metropolitans led 0-10 to 0-4 without having broken sweat.

The transformation in the Connacht champions upon the restart was incredible, with the only scores of the third quarter falling the way of Ryan O’Donoghue, Robert Hennelly, a free, and Lee Keegan.

The water-break checked Mayo’s momentum, but only temporarily, as their response to Dublin’s first two points of the second half was was to return with four of their own and reduced their arrears to just one point by the 69th minute.

Dean Rock’s free pushed the gap back out to two but O’Donoghue, a free, and Hennelly, a 77th minute ’45’, in what literally was the final kick of normal time, ensured another 20-minutes was required to settle the feud. And settle it Mayo would.

Dublin did regain the lead with a fisted Sean Bugler point 30-seconds in, however, that was the local side’s final flag raised. 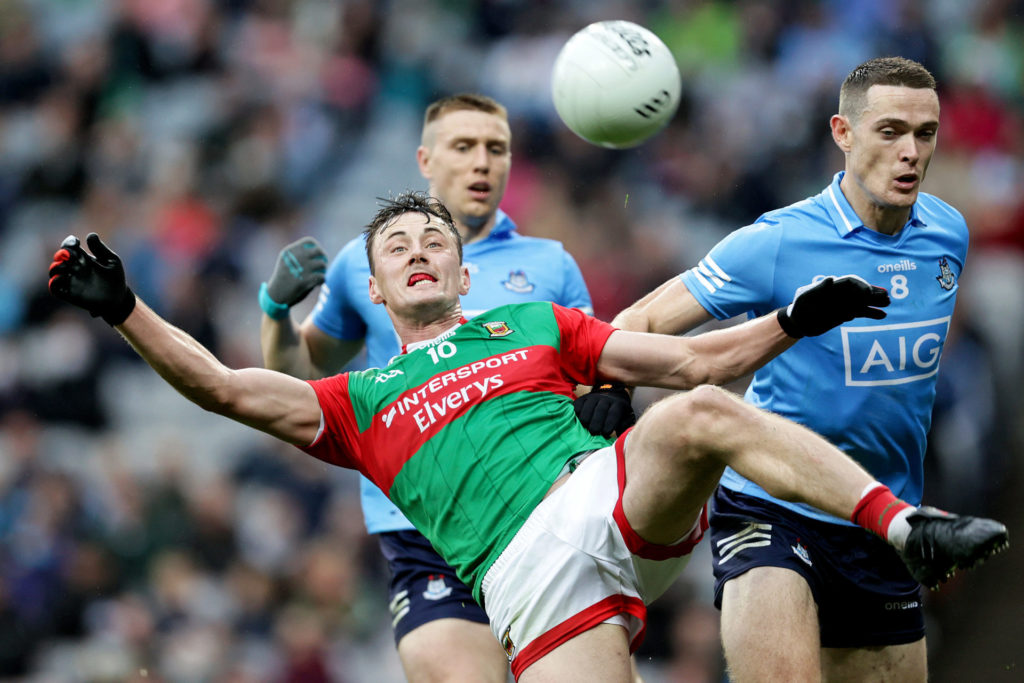 Back to back points from the rapidly improving Tommy Conroy sent Mayo into the lead for the first time on the evening and by half-time, the Green and Red had stretched into a 0-17 to 0-14 advantage thanks to sub Darren Coen and a fifth point by Ryan O’Donoghue.

It was as much as Mayo needed as extra-time’s second half was totally scoreless, as Mayo defended stoically, even managing to introduce fit-again Brendan Harrison for his first appearance of the year.

Tyrone, struck by Covid-19 in the panel, have informed the GAA they won’t be able to field a team in an already rescheduled semi-final with Kerry next weekend. How the GAA responds will be eagerly awaited. Mayo, for now however, won’t care too much about any of that.