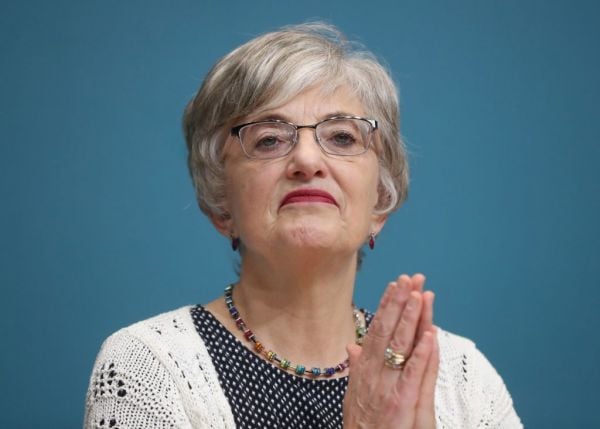 Former minister Katherine Zappone has decided to turn down a Government appointment as a special envoy to the United Nations after criticism about the manner of her nomination.

In a statement by email, Ms Zappone said: “While I am honoured to have been appointed by the Government to be the Special Envoy on Freedom of Opinion and Expression, it is clear that criticism of the appointment process has impacted the legitimacy of the role itself.

“It is my conviction that a Special Envoy role can only be of real value to Ireland and to the global community if the appointment is acceptable to all parties.

“For this reason, I have decided not to accept this appointment, and I have communicated my decision to the Minister for Foreign Affairs.”

Political pressure had been growing on Wednesday as attention turned to an event organised by Ms Zappone last month.

A private outdoor function at the luxury Merrion Hotel, hosted by Ms Zappone and attended by Tánaiste Leo Varadkar, was compared to Golfgate by Opposition TDs.

A report in the Irish Independent said the event involved 50 friends and former colleagues of the former minister for children, who were seated at separate tables in groups of six.

This led Opposition TDs to question whether the event was in line with Covid-19 regulations, comparing it to the infamous Golfgate controversy in August last year.

That event resulted in a series of high-profile resignations, including by a minister and a European Commissioner, after they attended a parliamentary golf club event in Clifden, Co Galway, which was deemed to have broken pandemic restrictions.

Sinn Féin TD Matt Carthy said on Wednesday: “There are striking similarities, I have to say, with what took place at the Clifden hotel.

“Nobody wants to be pointing fingers. We’ve seen how that has actually eroded public confidence in the health measures that are there.

“But a standard was set following the events in Clifden. As I said, there are striking similarities in terms of the rationale and excuses that are now being put forward and that people ask the hotel for their interpretation of the public health advice.

“I don’t know what the legal basis of this event was. To me, it appears to be questionable, but the relevant authorities will make a judgment on that.”

Mr Carthy said the Tánaiste had shown “poor judgment” and called on him to clarify his attendance.

In a statement, Ms Zappone told RTÉ she had been “assured” by the hotel that the event was “in compliance with Government Covid-19 restrictions and guidelines”, and said all other queries should be directed to the hotel.

Mr Carthy added: “At the end of the day, the Taoiseach will ultimately need to make a call as to whether he will expect the same standards to be met this year, as he did of previous ministers and indeed European Commissioners 12 months ago.”

He said: “It seems to me that, if it is the case, and it certainly appears to be the case, that the event was organised in contravention of the rules that were then in place, at the time the event took place, well, then that’s a very serious problem.

“In effect, it’s a sort of Golfgate situation again, one year on from the last one, whereby some in society, those at the top of the political establishment, seem to think that the rules don’t really apply to them, they only apply to the little people.”

Mr Murphy called on Ms Zappone to come forward and make a statement.

He added: “There is a certain irony in Katherine Zappone being appointed an envoy in terms of freedom of expression, but at the moment she’s taken a vow of silence throughout a controversy that’s gone on over the course of a week.”

Aontú leader Peadar Tóibín said it is clear that the event at the Merrion breached Covid-19 regulations, and that a precedent had been set by the Golfgate controversy.

He said: “This is a jaw-dropping mix of hypocrisy and cronyism. This is the behaviour of a ruling elite that are telling citizens ‘Do as I say and not as I do’.

“The Fáilte Ireland’s guidelines for hotels and guest houses clearly state that ‘organised events, indoor and outdoor, are not permitted’ unless they are weddings or ‘non-social meetings, training and educational programmes considered essential to the operation of a business’.

“Clearly the Zappone social event does not fall into this situation.”

The Government faced growing calls to reverse its decision to appoint Ms Zappone to the envoy role.

Sinn Féin TD @mattcarthy has this morning written to the Chair and secretariat of the Public Accounts Committee, requesting that PAC examine the financial implications of the appointment of Katherine Zappone to a lucrative UN role.

Taoiseach Micheál Martin admitted there was an “oversight” in the appointment, which did not go through a public process and was said to have “blindsided” him when taken to Cabinet by Fine Gael at the final meeting before the Dáil summer recess.

Mr Carthy said: “We’ve seen too many of these crony-like appointments over the course and lifetime of this Government and this is blatant cronyism at its worst.”

Asked if Ms Zappone should step down from the role, he replied: “Yes, she should, she shouldn’t have been offered the job in the first place.

“If the Government aren’t willing to do the right thing and just withdraw the invitation for this post, then I think Katherine Zappone needs to recognise that there is no public trust in the basis on which this appointment was made and she should do the right thing.”

The Merrion Hotel issued a statement saying it has adhered to Government public health measures “at all times since the start of the pandemic”.