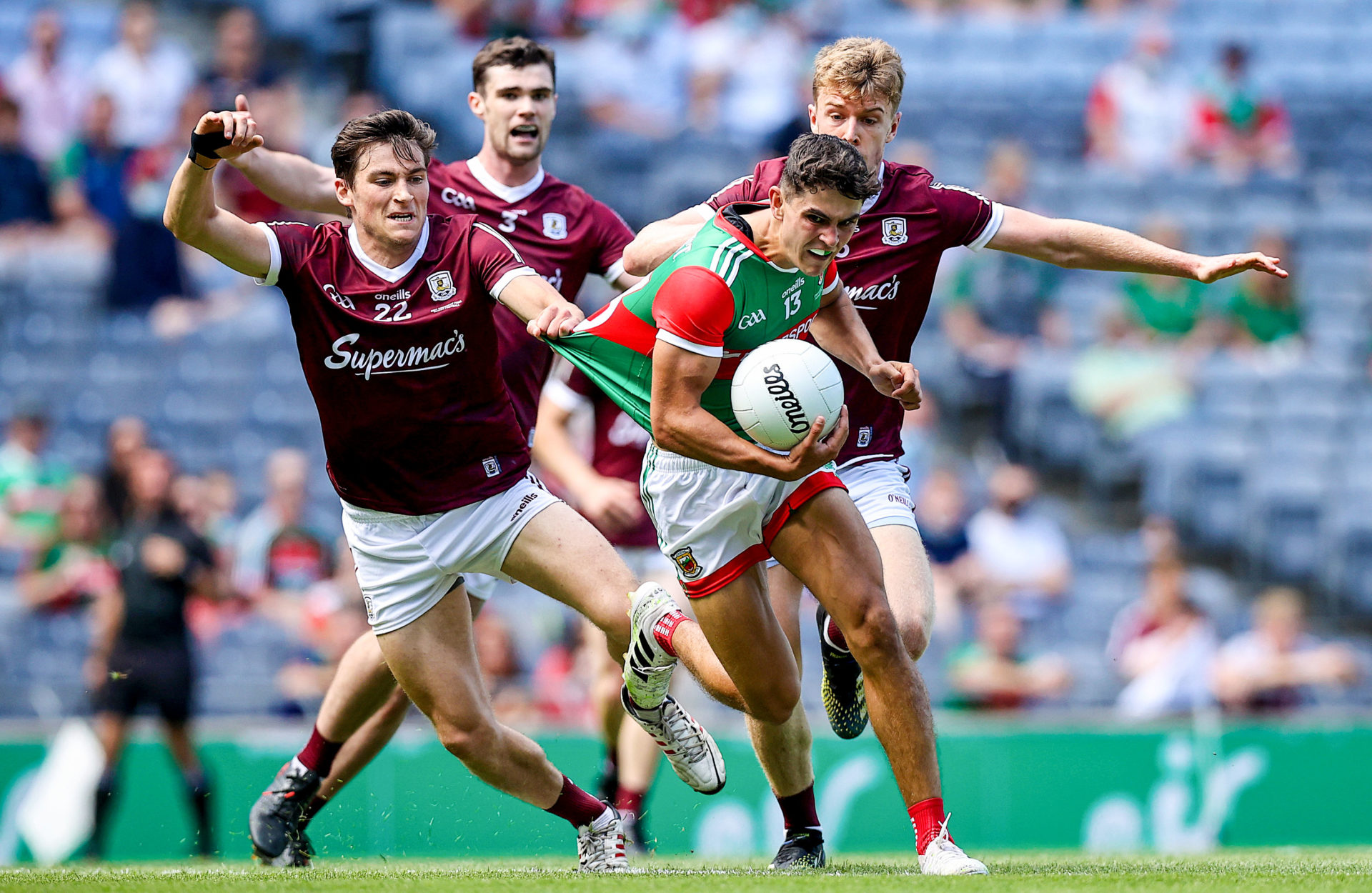 Tommy Conroy has the quality of his jersey tested by Finnian Ó Laoí of Galway. Picture: INPHO/Tommy Dickson

Mayo’s 48th time to win the Connacht senior football championship was due to several reasons but probably none so important as strength in depth, in that they had it and Galway hadn’t.

Having to replace two players inside the opening 25-minutes of Sunday’s game in sun-drenched Croke Park was a massive inconvenience to Padraic Joyce, and that disruption to all his pre-match plans was exacerbated by his captain and talisman, Shane Walsh, needing a half-time injection just to be able to stay on the pitch.

A manager can only ever play the hand he has been dealt and with Joyce having to dig deep into his panel much earlier than he would have intended, it’s fair to say that luck certainly wasn’t on his or Galway’s side, from an injury perspective at least.

But nor was that the sole cause of them losing another Connacht final to their great rivals and if anything, it simply shone a spotlight on their greatest need, which is to seriously develop their playing resources.

One needs only to look at the impact of the first two substitutes that Mayo sprang compared to what was offered by Finnian O Laoi and Jack Glynn, who had replaced the unfortunate Robert Finnerty, son of my fellow Moygownagh man Anthony, and Seán Kelly. Kevin McLoughlin and Eoghan McLaughlin arrived for the second half to completely transform the proceedings.

We’ll dissect exactly what they offered a Mayo team that was listing badly in a moment, but first to take the game back to its earliest origins.

My impression, after the opening ten minutes, was that Mayo were going to have things pretty comfortable. Their start had been excellent, one that was laced with lots of pace and power, and they settled into the game much better than Galway. It was still relatively early in the match but the indications were that the Green and Red might be about to have things at their leisure. But we had been misled.

Galway quickly got their wind and got to the pace of the game, with Paul Conroy effectively taking over around the middle and dictating so much of the play.

The towering St James’ midfielder was complemented suitably by the pace of Shane Walsh and by Damien Comer’s bustling presence at full-forward, and for a team that had begun so sprightly it was hard to fathom how Mayo, for most of the rest of the half, seemed asleep at the wheel.

Their malaise, for me, began when Lee Keegan tried for a point off his left boot that sailed badly wide.

It seemed to set off a rot within Mayo; Tommy Conroy kicked a couple of wides from relatively easy positions, Paddy Durcan missed one too, likewise Stephen Coen from a mark at the edge of the ‘D’. It seemed like Mayo had taken their foot off the gas and were beginning to play more as individuals, something that was in stark contrast to how they dismantled the tepid challenges of Sligo and Leitrim in their quarter-final and semi-final contests.

It was quite staggering, from a Mayo defensive point of view, how Shane Walsh had been able to dash from not far inside their 45-metre line to reach a ball first that had struck an upright.

It was a major lapse on Mayo’s part and they certainly did appear rocked when Walsh hammered the ball to their net, even more so when he took off on a blinding run down the right wing to set up Damien Comer for a second Galway goal in the 27th minute.

Galway were at this stage doing an awful lot of things very well but if anything, I think they failed to capitalise fully on their period of dominance and should probably have come away with more than the 2-2 which they scored in that second quarter.

It will have concerned the Mayo management in that first half, to see the space that began to open up once Galway’s players chose to run at their defence, and how when defenders were caught in one-on-one situations that so little defensive cover seemed to exist. To be fair, some remedial action was taken.

It’s difficult to understand, especially given what both players offered when introduced for the start of the second half, why neither Eoghan McLaughlin nor Kevin McLoughlin started this game for Mayo. Management obviously had their reasons but fitness, obviously, could not have been one of them given the magnitude of their contributions once they entered the fray.

They really were the changing of the game and without them, we could definitely have been in bother. But it was one risky move on the management’s behalf to hold them in reserve and there’s no question but that if Mayo had been up against better opposition on Sunday, the likes of a Dublin or Kerry, the game would have been over before Eoghan and Kevin even got on the field.

You’ve got to have your best players on the pitch, you’ve got to have pace around the middle third, and Mayo lacked that significantly in the first half which was the cause of so many of their woes. The work-rate of the Westport and Knockmore men enhanced Mayo on that score, no end.

We all know Eoghan McLaughlin’s running ability and his intensity in the tackle. He made a huge difference and very nearly capped a superb second-half display with a goal. And as for Kevin McLoughlin, he was truly phenomenal. There are few better at snaffling up possession around the middle and he was instrumental to the creation of the penalty which resulted in Mayo’s first goal. He also scored a point, won the break for a Tommy Conroy point and had an all-round significant impact on swinging the tie back in our favour.

Another factor was the move of Aidan O’Shea to full-forward. I have been a long-time advocate for O’Shea playing and staying in the full-forward line and given the sheer heat of the conditions last Sunday, and that he lacks the pace required for the middle third these days, it made sense to position him where Galway feared him the most. It gave Mayo a focal point, one that Galway had in the first half when Damien Comer was doing very well on the inside line but one they lost somewhat in the second when the Annaghdown man began to drift further out the pitch. Maybe his reason was because the supply lines were drying up and that he felt he had to forage deeper to win ball but whatever chance Galway had they needed someone of his calibre as close to goal as possible.

Speaking of powerful Breaffy men, if Paul Conroy was the dominant figure of the first half then Mattie Ruane really was the king of the second. To be fair, the Mayo midfielder was very good all through, having powered on to score Mayo’s opening point of the match, but particularly in the second half he was phenomenal. His athleticism saw him leave Galway men for dead, like on his mazy run to score Mayo’s second goal, and it will be interesting to see how he carries that form into the All-Ireland semi-final. Ruane, McLoughlin, Conor Loftus and Paddy Durcan were others who, for me, heavily influenced the turnaround in Mayo’s fortunes after half-time.

The two goals conceded, coupled with Damien Comer’s fisted effort against the crossbar in the second half, means concerns remain over Mayo’s defence. There remains a porous look at times.

However, you have to give credit where credit is due, they got the job done on Sunday and it was a step up in class from what they had previously encountered. But an even bigger test awaits and when you come up against the likes of Dublin and the runners are coming at all angles, you have a huge need to be set up very well defensively. Runners are needed to give the sort of cover required so I’ve absolutely no doubt that Eoghan McLaughlin and Kevin McLoughlin will both start the next day.

Only our best team and best performance will give us any chance of lifting a second trophy in Croke Park this year.