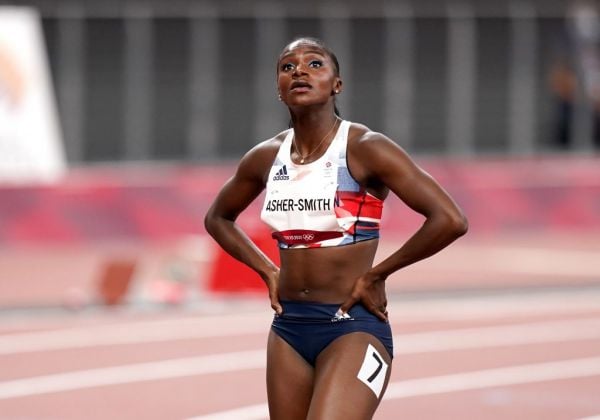 Dina Asher-Smith suffered an Olympic shock after failing to make the 100 metres final.

The 25-year-old was expected to challenge for a medal but finished third in her semi-final to crash out in Tokyo.

Great Britain’s Daryll Neita did make the final though as one of the fastest losers after clocking 11 seconds.

It’s an Olympic final for @daryllneita!

Asher-Smith, the 200m world champion, had withdrawn from the British Grand Prix in Gateshead earlier this month with a hamstring injury.

She said in her build-up her hamstring had been “grumpy” but insisted she was fully fit yet her performances suggested anything but.

Asher-Smith was unconvincing in the heats and qualified joint 11th fastest after running 11.07secs.

She only managed 11.05secs in the semi-final even when the event had been rocked by the suspension of Blessing Okagbare after she failed a drugs test.

The Nigerian was due to run against Asher-Smith in the first semi but was sanctioned by the Athletics Integrity Unit having tested positive for Human Growth Hormone.

Okagbare was expected to challenge for a medal and her absence should have helped clear the path to the final for the Team GB athletics captain.

But she struggled again as Switzerland’s Ajla Del Ponte finished ahead of her in second.

Asha Philip came eighth in the second heat in 11.30s and did not progress to the final as Jamaica’s double Olympic champion Shelly-Ann Fraser-Pryce qualified fastest in 10.73s.