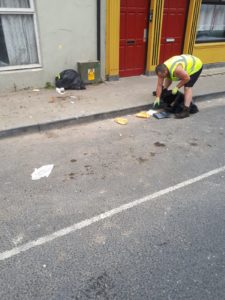 A council official clears some of the rubbish discarded on Rush St.

Walking into a Castlebar street is like ‘heading into Beirut’, according to a local councillor.

The issue of rubbish being discarded onto the Rush St area of the town, where many businesses operate, was raised by Cllr Michael Kilcoyne last week who said: “When you turn left at the traffic lights into Rush St, the scene is like something out of Beirut. There are bags of rubbish all over the street with people putting them there in the late afternoon. Dogs and crows then come and the rubbish is strewn all over the street.”

He questioned why the incidents of illegal dumping are not being investigated. “We are employing litter wardens. Why are they not issuing tickets?”

Cllr Blackie Gavin said this street ‘seems to be the forgotten area of Castlebar’. He said: “There are elderly residents who cannot walk up Lucan St because of the state of the footpaths. There are bags of rubbish scattered everywhere. It is disgraceful and action needs to be taken.” 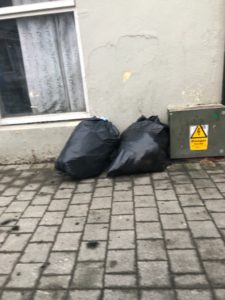 Area Manager, Mr John McHale said the council had taken control of the area and had asked litter wardens to be more vigilant in that area.