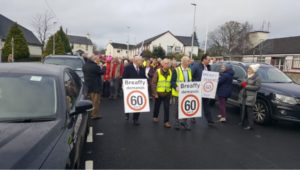 Consultants have been appointed to progress new traffic calming measures at Breaffy Village.

It is hoped that the scheme, which residents of the area have been campaigning for over the past number of years, will proceed to the planning stages later this year.

Once this is approved, the scheme will proceed to design and land acquisition followed by tendering.

It is hoped the scheme will be delivered in parallel with the opening of the N5 Westport to Turlough project.

At present the speed limit through the busy village, located on the N60 between Castlebar and Claremorris, is 100km per hour.

The local community and elected councillors all agree the limit should be reduced to 60km per hour.

Deputy Alan Dillon said the preferred scheme will provide for a reduction in the speed limit to 80km per hour from Kilkenny Cross to Heneghan’s Garage, with a further reduction to 60 km per hour at Breaffy National School during opening and closing times.

Other works include the removal of parking on the hard shoulder at the Church and Breaffy House sides of the road, as well as narrowing the road from 3.5metres to 3metres.

“The works will also provide for the inclusion of a pedestrian crossing with splinter islands near the second Breaffy House entrance and the construction of a cycle land and pedestrian pathway in and out of the village,” said Deputy Dillon.