What do we want for our young players? 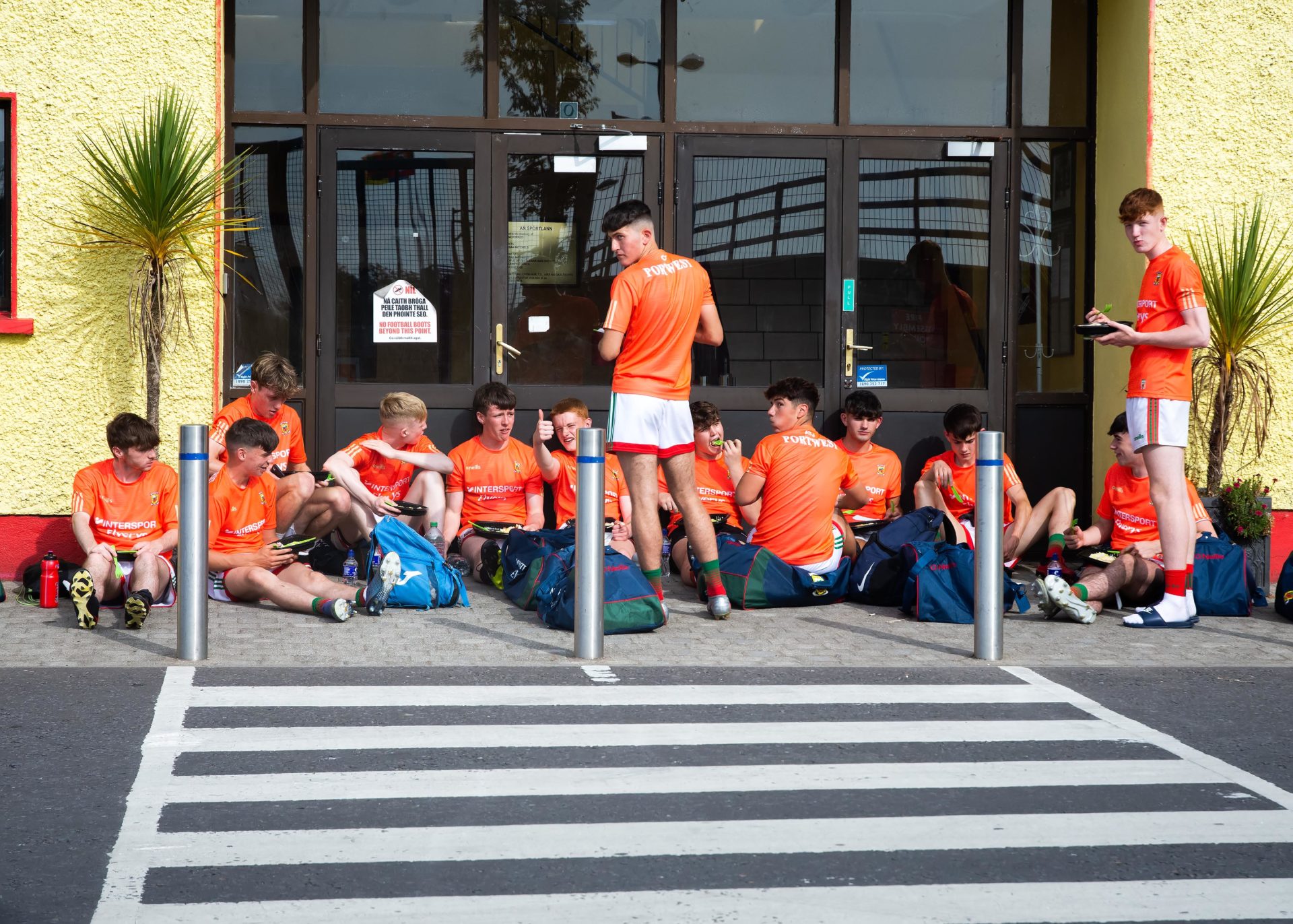 The Mayo under-20 team have their pre-match meal outside An Sportlán in Castlebar before their Connacht final against Roscommon last Wednesday evening. Picture: INPHO/Evan Logan

Oisin McConville, speaking on the Second Captains podcast last week, recounted a telling story about his recent stint coaching the Freshers team at Dundalk IT. McConville was new to the job and was unfamiliar with most of his players, so he got them on the team bus and asked each man to write down his name and the position on the field in which he preferred to play.

When the submissions were all in, McConville found that of the 26 young players on his panel, 19 saw themselves as half-backs.

It was an insight into the current make-up of Gaelic football, where athleticism and the ability to run the ball from the middle third of the field are the attributes coveted and cherished above all others. The story came to mind later in the week as we watched both the Mayo under-20s and under-17s bow out of their respective Connacht championships at the hands of Roscommon, the former in their provincial final in Castlebar last Wednesday evening and the latter in a quarter-final at the Hyde two days later.

Firstly, it’s worth acknowledging that the inclination to overreact to these results is a tempting one. The similarities in the circumstances of the two defeats – two days apart, against the same county, and by exactly the same margin (seven points in both games) – lend themselves to sweeping declarations about the sorry state of underage football in Mayo and the need for immediate and severe remedial action in our structures. That’s absolutely not what this is.

For one thing, the two performances were very different. The under-20s had their problems up front, in their lack of an inside threat and their persistence with a lateral passing game that played into the hands of the resolute Rossie defence.

The under-17s had the opposite problem: their attack actually functioned very well but they were way too open at the back, shipping four first-half goals that ultimately undermined any attempts at a comeback.

But that’s not to say there weren’t some common themes to be identified between the two performances and some questions that ought to be asked about what exactly we are coaching our young players to be, not just in Mayo but in the GAA as a whole.

It’s an issue that’s knotted together with the formats of the two most high-profile inter-county championships for underage footballers: under-17 (the old minor grade) and under-20 (what used to be under-21). We should point out that the under-17 championship is usually round-robin, and will be once again in 2022, but was straight knockout this year and last year on account of the pandemic. The under-20 grade was always knockout and will continue to be going forward.

They are both regularly referred to as “development grades” with priority given to preparing young footballers to go on and succeed at senior level. But how much development can you really achieve when a team is guaranteed no more than one competitive game in a given season? And where is the value in developing a panel of 30-odd players every year when the reality is that a maximum of three to four players from every crop are likely to go on to play at senior inter-county level?

Your columnist was outside the Mayo dressing-room at Dr Hyde Park on Friday evening. I have genuinely never seen such devastation etched across the faces of young footballers. They were, almost to a man, inconsolable. Talk of “development” would have fallen very flat in that setting.

‘Twas ever thus at underage, in fairness. You get your year and once it’s done, it’s done. Back in the day there were no round-robins or group stages and lads survived. The idea was that playing minor or under-21 for the county was reward enough in itself, something you could carry with you for all your days to come.

But those corinthian ideals don’t match up with modern reality. Nowadays, the mission to play inter-county minor begins around the age of 14, when players are first introduced to S&C programmes. They go through the academy squads, move up through the ranks. Their progress is measured and quantified; how much they can lift, how many kilometres they can cover in a given session. The professionalism that began to enter senior football 20-odd years ago has gradually trickled down into the underage grades.

Come the big year itself they start training, usually, in January. Gym sessions, video sessions, nutritional plans. By spring they’re out on the grass running drills, pinning down a style of play.

And for what? One game? If the system hadn’t organically developed this way, nobody could design it. The underage grades can either be cut-throat, win-at-all-costs competitions or they can be developmental pathways with the aim of nurturing and encouraging talent. They can’t really be both.

We do seem to be approaching a crossroads in underage football. Is it for the many, or the few? Should a Mayo under-17 team, for example, be primarily concerned with keeping the supply lines pumping for the under-20s, and subsequently for the seniors, producing a handful of top-level prospects each year? Or should the competitions be taken on their own merits, as a chance for young players to go out and represent their families and their clubs and themselves against the best another county has to offer, regardless of where the future might lead?

The prestige and pride that comes with wearing a Mayo jersey at under-17 or under-20 has not dimmed or wavered, and I hope it never does. But they cannot be allowed to become glorified conveyor belts. The instinct will always be there to see a promising player at under-20 and wonder whether he might be worth a call-up to the seniors but surely that can’t be the main goal?

To circle back around to the point, it was hard not to wonder this week whether the tension that now exists between coaching young footballers to be successful in their own moment and moulding them for greater things is affecting how players see themselves. As McConville put it, half-back is a very comfortable place to play in modern football, because you have defensive protection behind you and a license to roam forward.

The two Mayo underage teams we saw this week were full of brilliant athletes. Aidan Cosgrove, Ruairi Keane and Connell Dempsey. Or Conal Dawson, Cathal Corless and Jack Ferguson. All among the standout players on their respective Mayo teams. All half-backs and half-forwards.

But a small, specialist corner-forward, for example? Is there a place for him in underage county football, even if the suspicion is there that he just won’t be big enough to play senior? Or that rare bird, a lad who wants to play corner-back and has no real interest in driving forward? Will he get a place, even though his breed is disappearing from senior football faster than pot-bellies and Mikasa gloves?

Mayo’s underage structures are in good shape; one bad week doesn’t change that. The under-20s knocked out the All-Ireland champions a week earlier, after all. But for the GAA as a whole, a reckoning may be approaching. It shouldn’t be enough to groom our athletes for the future. We should also be supporting our footballers in the present.