A local elected councillor says a visual inspection of properties must form part of the appeals process pertaining to applicants deemed ineligible for the pyrite redress scheme.

The revelation that 20 applicants to the Defective Concrete Blocks Scheme had been deemed ineligible for redress by Mayo Co Council last week was raised at a Ballina Municipal District meeting this morning, July 23 by Cllr Mark Duffy. 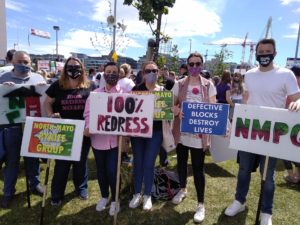 The council had deemed the properties in question undamaged due to a lack of pattern cracking without having carried out a physical inspection of the homes.

Cllr Duffy argued that the science and results do not lie in terms of the damage that pyrite causes in blocks. The families deemed ineligible have been left in a situation where they cannot sell, insure or upgrade their homes:

“Having spent €5,000 on a test and engineer’s reports that have proven they have pyrite they are basically being told that they have to wait and let their home crumble around them,” Cllr Duffy said, arguing that all decisions should have been deferred pending the outcoming of the ongoing review of the Defective Concrete Blocks Scheme.

He called for the refusals to be rescinded, warning that they will have repercussions for confidence in the scheme.

His sentiments were echoed by Cllrs John O’Hara, Seamus Weir, Jarlath Munnelly, Michael Loftus and Annie May Reape, who all agreed that the current redress scheme simply isn’t working and were highly critical of the council’s failure to visually inspect properties.

Mr Tom Gilligan, director of services for the Ballina Municipal District, stressed that the council is obliged to follow certain procedures and processes in administering the scheme.

To date 74 out of 99 applications have been accepted with further information requested in relation to five and 20 deemed ineligible.

When asked why no visual inspection of the houses had been conducted by the council, Mr Gilligan said the local authority is very happy with the process that is in place.

Those that have been unsuccessful in their applications have been advised of the appeals process, he added.

Cllr Duffy said he had personally seen the cracks in some of the ineligible houses and warned that the scheme refusals had created huge unease.

Cllr Loftus said he will be insisting that the appeals process will involve a visual inspection.

Responding to suggestions that application processing be paused until the working group concludes its review of the scheme, Mr Gilligan concluded:

“We have to work independently of of the working group and it would not be in anyone’s interest for us to stop working. We have a duty of care to process applications and turn them around as quickly as possible.”