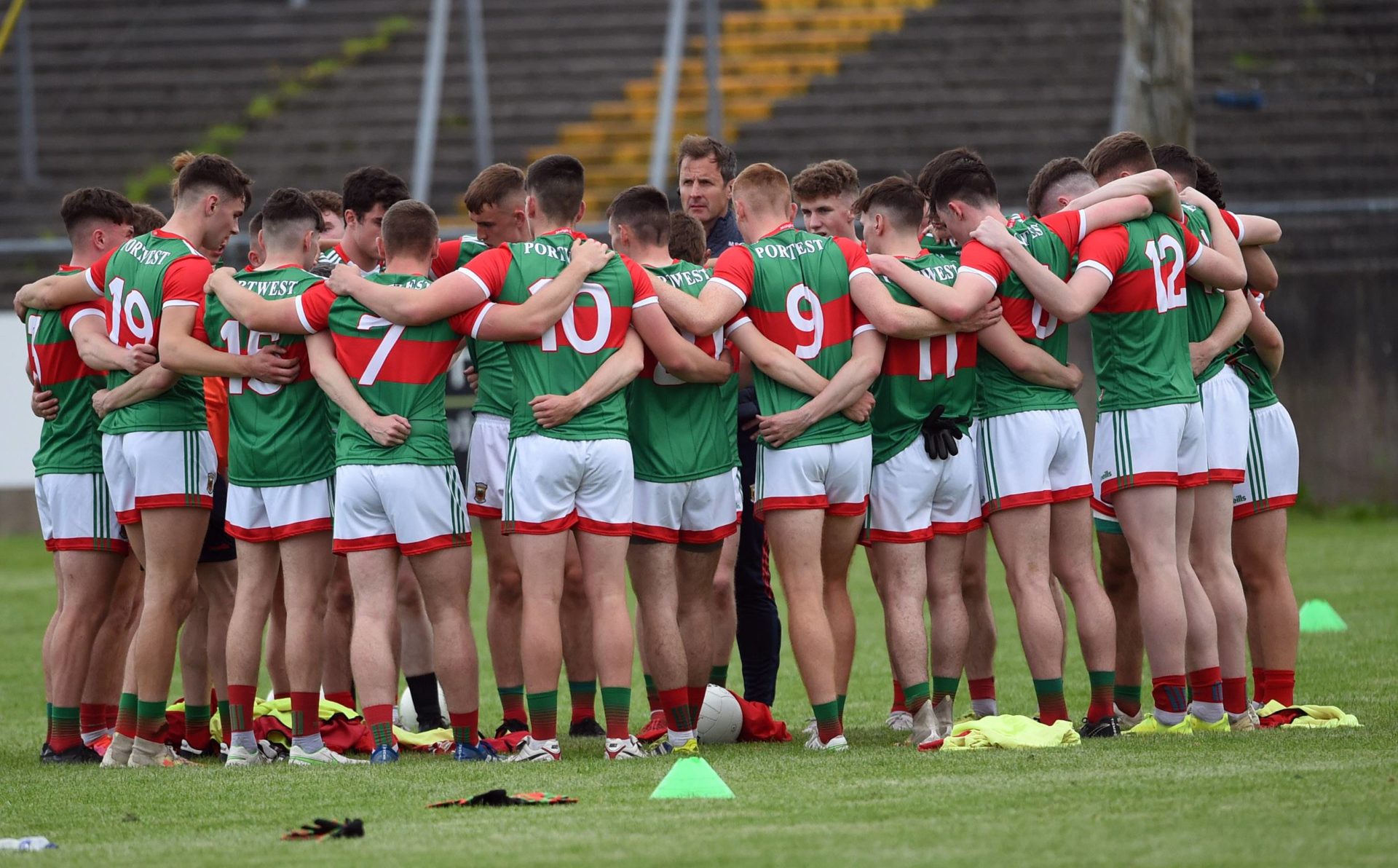 The Mayo under-20 footballers pictured in their half-time huddle during their win over Galway last week. They take on Roscommon in the Connacht final this evening. Picture: David Farrell Photography

Following on from their dramatic win on penalty kicks over Galway in last Tuesday evening’s semi-final in Tuam, the Mayo under-20 footballers will go in search of their first Connacht title at the grade in three years when they take on Roscommon in the provincial final in Castlebar tonight (Wednesday).

Mayo last won the Connacht crown in 2018, when they easily got the better of Roscommon by 3-16 to 1-6 in the final at Dr Hyde Park on their way to the All-Ireland final. Goals from Conor Diskin and Tommy Conroy and a Ryan O’Donoghue penalty proved more than enough for Mike Solan’s charges to emerge with the win on that occasion.

Mayo have already claimed a major scalp by dethroning the reigning Connacht and All-Ireland champions Galway in a game in which few outside observers gave Maurice Sheridan’s men much of a chance.

But the Balla native, in his first year in charge of the under-20s after taking over from Solan, preached caution after his side’s win on penalty kicks, insisting that no medals have yet been handed out and that his team would treat their final opponents with the utmost respect.

The identity of their opposition became known 24 hours later as Roscommon emerged from an entertaining semi-final battle with Sligo at Hyde Park on Wednesday night.

Liam Tully’s Rossies, who had already seen off Leitrim in some comfort in the provincial quarter-final a week earlier, had to hold off a late Sligo comeback but eventually ran out 4-13 to 2-12 winners to seal their spot in a second successive Connacht final (they were heavily beaten by Galway in last March’s decider).

These two sets of players last encountered one another as under-17s back in 2018, when Roscommon delivered a 13-point whipping on Tomas Morley’s Mayo in Kiltoom. Of the 21 players to see action for Mayo in that game, 11 played a role in last week’s win over Galway.

That would have been an even dozen had Enda Hession, who captained the under-17s three years ago, not been ruled ineligible to play under-20 this year after representing the seniors against Sligo and Leitrim.

It’s interesting to note that two of the players who were not included on that under-17 team were Knockmore duo Connell Dempsey and Conor Flynn, both of whom were trusted to bury two penalties apiece in the shootout in Tuam. Both have earned their place on the county team thanks in no small part to their exploits with Knockmore’s Moclair Cup-winning team last year, on which corner-back Sean Holmes also played a key role.

Indeed, the spread of clubs represented and the obvious influence of the club championships is a heartening element of the make-up of this Mayo team.

The likes of wing-forward Conor Dunleavy shone for Balla as they won intermediate last year; Aidan Cosgrove was equally good for the Kiltimagh team they beat in the county final. Both Ruairi Keane and Ethan Henry have been driving forces in the emergence of Mayo Gaels in the last couple of years.

Jack Carney is leading the way for junior favourites Kilmeena. Eoin Gilraine is part of a new wave of Ballinrobe players set to make a run at the Sweeney Cup in the next few months. The list goes on.

The team is captained by Charlestown’s Jack Mahon, who makes up a powerful inside forward line beside Ballina’s Frank Irwin and Ultan O’Reilly from Mitchels. Carney, who featured for seniors in this year’s league campaign, forms an athletic and mobile midfield unit around the middle alongside Henry and Dempsey and in Flynn, Keane and Cosgrove, Mayo have the ability to run the ball from the defence at pace.

Sheridan named his starting 15 for the final on Tuesday, with two changes to the starting side from the Galway win. Donnacha McHugh has come into the backline in place of Gilraine and Conor Reid of Moy Davitts comes in at centre-forward in place of Owen McHale. 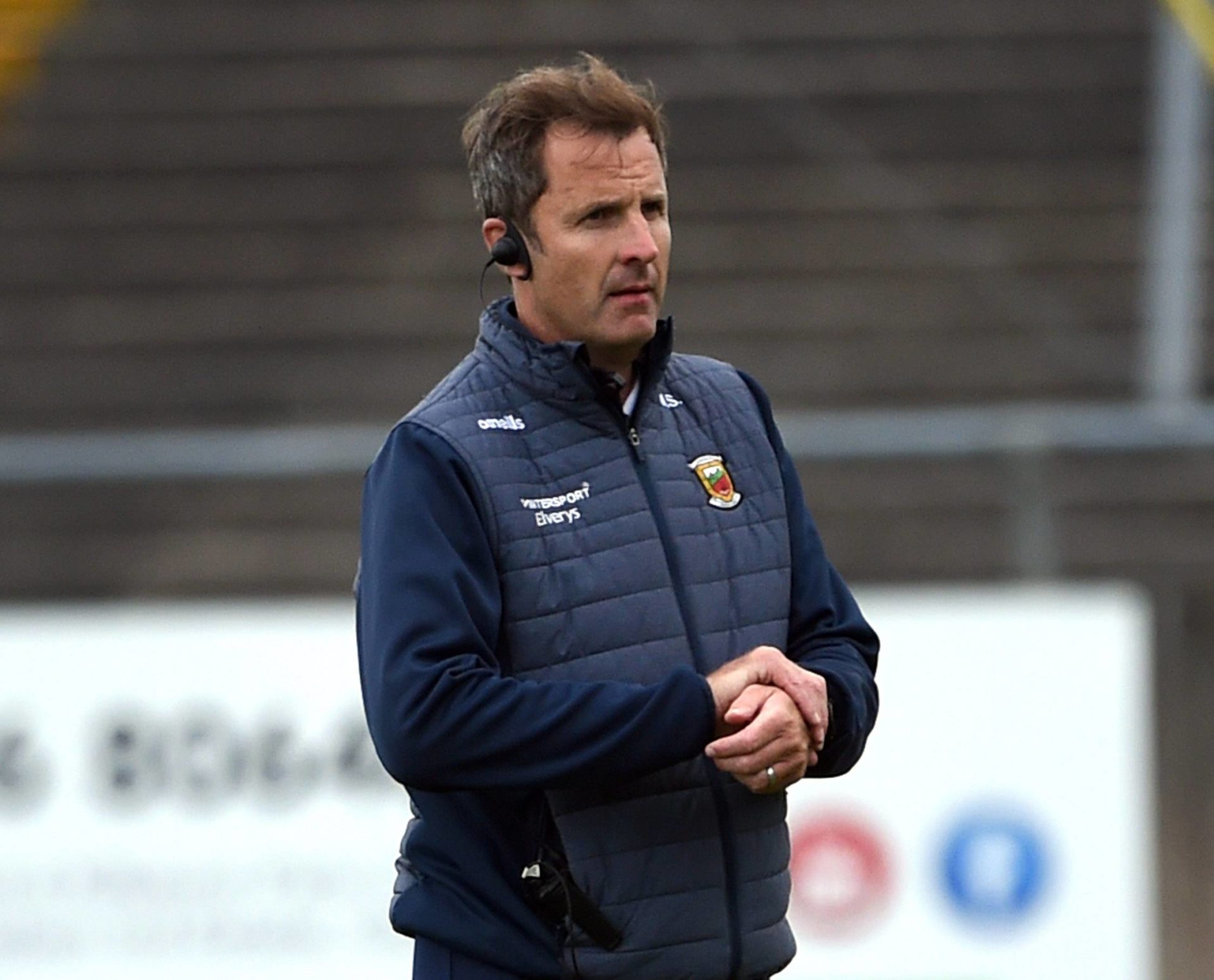 Maurice Sheridan will aim to lead Mayo to their first Connacht under-20 title since 2018 this Wednesday evening. Picture: David Farrell Photography

But Roscommon, with two wins already behind them, will come to Castlebar with a sense of confidence.

Among their main threats up front are Adam McDermott from Castlerea, who was particularly good in the win over Leitrim, and James Fitzpatrick, who bagged 2-2 against Sligo.

You may remember Oran clubman Fitzpatrick as the man who scored the winning point with the last kick of the game for Roscommon CBS in the All-Ireland B Schools final of 2019, against Scoil Phobail Sliabh Luachra at Croke Park.

Elsewhere Keith Doyle – another member of that CBS team – is a dominant figure in midfield while Robbie Dolan and Daire Cregg are smart and capable operators around the half-forward line.

Sheridan has been correct to damp down some of the jubilation of the win over Galway because this Roscommon side are a dangerous outfit, but with the confidence borne of defeating the All-Ireland champions on their own patch, Mayo should have enough to reclaim the provincial title.

The Connacht under-20 final throws in at 7.30pm this evening at MacHale Park. The game will be broadcast live on TG4.