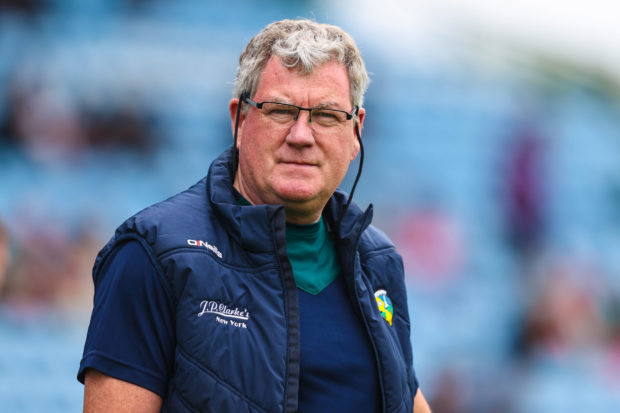 Terry Hyland has stepped down as Leitrim GAA manager after three years at the helm. His departure comes days after his sides defeat to Mayo in the Connacht semi-final.

Speaking to the media following that match, Hyland said he has fears for the future of inter-county football. The visitors lost heavily by a margin of 24 points and Hyland said the difference between the top teams and the bottom teams is very clear.

“We were outclassed and outgunned. We were probably caught in most sectors of the pitch and weren’t fit to live with them. There’s no point in me glossing over, everybody seen what they have seen and that was it, that’s the difference between the teams in the top divisions and the bottom divisions.”

“We’ve heard rhetoric all year about the makeup of the Championship and where football is probably going to end up in this country. They call it an All-Ireland but unfortunately it’s not that. It’s the top five or six counties and my fear is that in ten years’ time, it’ll go like rugby and you’ll see the smaller, so-called weaker counties being feeders to the bigger guys.”

“TV and money will come into play and I have the fear that’s where it’ll go,” said Hyland.

He said the game against Mayo was “no good to anybody” and that the system as it is, is preventing teams like Leitrim from making progress and improving. Hyland suggested that if they had the opportunity to play teams from their own divisions more frequently, they would have the chance to improve.

“Anybody from Division 3 or 4, are they better playing against their own team, building on the back of that and gaining a bit of confidence? Then, if they play the bigger guys, with a little bit of something built into them, they have the opportunity to go out and show their worth to see if they’ve improved.”

“Going out and getting hidings like that is no good to anybody. To be fair to the guys, they’re frustrated and in bad form and they’ll be the guys who’ll get it in the neck for the next three or four days, through no fault of their own.”

He added that this system can make it hard for players to keep coming back, particularly after the National Football League campaign finishes.

“It can be very hard to retain players when they feel they’re going to get a hockeying in their next game out and that is not a new problem. The system needs to be balanced so that it allows them the opportunity to stay on and improve.”

“The Leitrim’s of this world go out and get a beating like that, then they lock the kit up and don’t open it again for six or seven months. They go out again and have lost too much ground because they haven’t gotten enough game time in between.”

“It’s probably pride in their parish and in their county and people will always step up when they’re asked to do something. Do they really believe there’s something in it for them? After the National League is over, I don’t think so.”

Hyland said the financial disparity between counties has also played a role in this divide and that for a county like Leitrim to be able to compete again, it would take long-term planning.

“The commitment levels go through the roof and are backed by finance in the bigger counties and that is driving it on and is probably going to be hard to stop.”

“You see a spend in Mayo on the inter-county team of a couple of million and more on coaching. In Leitrim, it might be three or four hundred thousand. All the big counties are the same, it’s not just Mayo.”

“Some clubs in Dublin will have full-time coaches, full-time qualified people and are dependent on the full goodwill of the GAA, which we have done for centuries but unfortunately times have changed.”

“For the likes of Leitrim, it would need to be a ten-year approach. We would probably need to go back, pick a group of 10 to 12-year-olds and start working with them into their early 20’s and hope then the conveyor belt starts.”

“A county like Leitrim can’t just keep writing a new script every year and hope for change, because nothing will change.”