There’s a scene in the celebrated US drama series Mad Men in which Don Draper, the unflappable ad exec portrayed by Jon Hamm, is in an elevator with Ginsberg, his junior copywriter. The pair are arguing over a presentation and Ginsberg accuses Don of stealing his idea for an ad campaign.
Ginsberg, angry and hurt, tells Don: “I feel bad for you.”
Don stares straight forward and coolly replies: “I don’t think about you at all.”
The scene came to mind this week amid the minor ruckus caused by Frankie Dolan with his comments about the relationship between the GAA communities of Mayo and his native Roscommon. 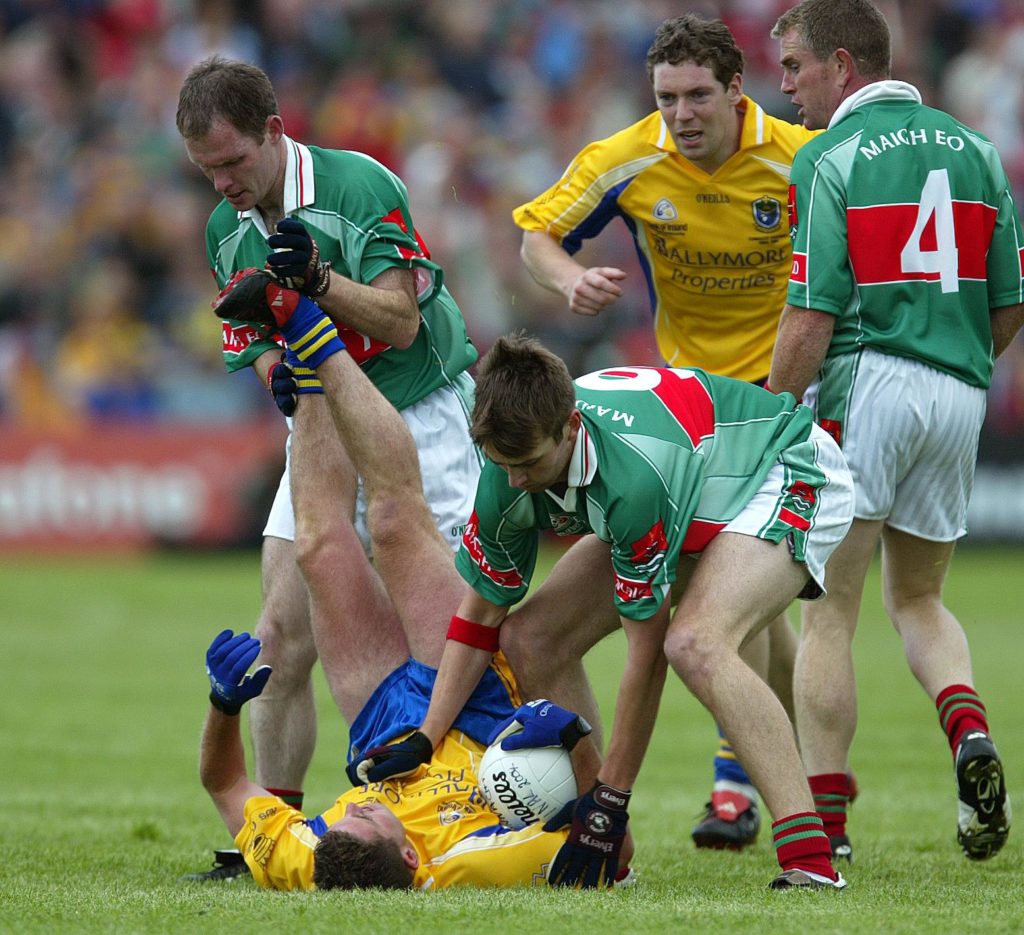 Dolan was being interviewed on Newstalk’s Off The Ball while promoting his recently-released autobiography, Outside of the Right.
Dolan got to talking about the incident in 2005 when he and four more senior Roscommon players were unceremoniously dropped from the county panel by the newly-installed manager, Mayo’s John Maughan. Dolan made no secret of the fact that his opinion of Maughan hasn’t softened much in the intervening years, using an example of the 2004 Connacht final, when Maughan’s Mayo beat Dolan’s Roscommon, to illustrate his point.
“I remember Maughan came into the dressing-room after the 2004 Connacht final. He was just strutting around the dressing-room.
“Lads were not in a good place, pissed off after losing a Connacht final to our greatest rivals,” Dolan told Eoin Sheahan.
“John came in and he was just blowing about how good Mayo were and what they’re going to do and all this bullshit. I was looking around the dressing-room at a few of the lads and I’m surprised Maughan didn’t get a belt.
“I remember seeing Mixer Ryan, Frankie Grehan, Nigel Dineen. There were a couple of hard boys there that wouldn’t like to listen to that stuff. That was the arrogance Mayo had, and they still have that arrogance.”
First and foremost, it’s important to be mindful of the fact that Dolan has a book to promote, and letting some controversial comments out into the ether is Publicity 101. Had Dolan not stirred the pot as he did, it’s very unlikely that he would be the subject of this column.
It’s also important to remember that he has an axe to grind with Maughan and that extrapolating the qualities of an entire county based on the post-match routine of one native son is a fairly flimsy sort of logic.
But it’s only fair to pause for a minute and reflect on whether Dolan’s claims have any kernels of truth. Certainly, we in Mayo don’t like to think of ourselves as arrogant. Arrogance is a vice generally reserved for winners, and as Mayo fans know only too well, their team is still yearning for the biggest win of all.
But it was interesting to hear Dolan’s outside perspective nonetheless. He is rightly regarded as one of the best and most successful Roscommon players of the last 20 years.
His record: one Connacht title, in 2001, and a famous All-Ireland club title with St Brigid’s at the end of his career in 2013.
There are lads walking around Mayo with one Connacht medal whose names some supporters would struggle to remember. That’s an unavoidable consequence of Mayo’s success within the province, both in historical terms and particularly in the current era, as Mayo have won nine of the last 17 Connacht titles.
“I think they feel that they’re entitled to win Sam Maguire,” Dolan ploughed on.
“No one is entitled to win Sam Maguire, you have to put in a massive, massive effort not just over a year or two but over a long period of time.
“Mayo had their chances over the last couple of years against Dublin and they just didn’t take them.”
That last point is undeniably true, as most Mayo supporters would freely admit. But does believing you’re good enough to win constitute entitlement? Does starting out each year with a hope and a belief that the team have the tools at their disposal to win an All-Ireland constitute arrogance?
It was left to Andy Moran to defend Mayo’s honour. Ballaghaderreen native Moran, a man who knows the complexities of the Mayo-Roscommon relationship more intimately than perhaps any other man alive, responded to Dolan’s remarks on his Football Podcast with Paddy Andrews and Tommy Rooney.
“He painted all Mayo people with the brush of John Maughan,” Moran said. “John is a great guy, but he’s a character though.
“I can see Maughan strutting into the dressing-room alright, but to base all your Mayo context on that is a bit bizarre.
“Outside our town, it is not the rivalry for Mayo people though. The big rivalry there is Galway. 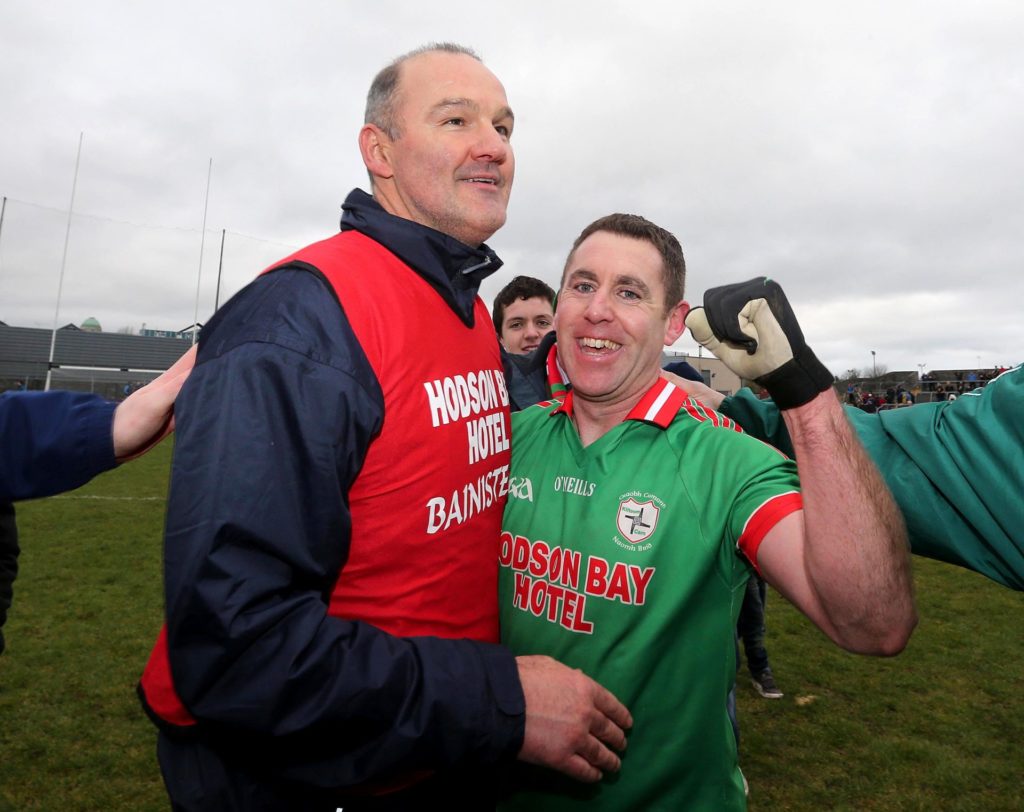 “What surprised me most about Frankie was that he lives in Athlone! He’s nowhere near Mayo. I’m just thinking: this is a bit bizarre.”
Moran’s points were well-made. Certainly, around parts of East Mayo like Ballaghaderreen, Ballyhaunis and Kilmovee (where your columnist comes from), the Mayo-Rossie antagonism is strong. Gerry Lohan’s goal in 2001 is a sore point. The sting of Fintan Cregg’s last-minute score in 2019 is still being felt.
But these are what Kavanagh would call local rows. Gods make their own importance and all that. It’s the same flavour of localised rivalry that takes hold around Charlestown and Bellaghy, Killasser and Bonniconlon when Mayo play Sligo in a big championship game.
As Moran rightly pointed out, for the vast majority of Mayo supporters across the county, the big rivalry is Galway. It always has been. They are by a distance the two most successful counties in the province. They use one another as standards by which to gauge their own progress. The links forged through St Jarlath’s of Tuam, a nursery for Mayo footballers through the decades, and by the countless Mayo people living in Galway all contribute to that rivalry.
It’s a pot left on a constant simmer which will more than likely come to the boil again in a couple of weeks when the counties meet in the Connacht final, presuming Mayo get over Leitrim in Castlebar this weekend.
Dolan made one more eye-catching statement in his interview. Moving beyond the supposed arrogance and entitlement of Mayo football and the perceived delusion of the supporters, he announced: “People don’t realise the rivalry between Roscommon and Mayo like. We hate each other.”
It was an off-the-cuff remark that obviously wasn’t meant in a literal sense but it betrayed an underlying insecurity in Roscommon football. Hate is preferable to indifference. And despite the huge strides that Roscommon have made in recent years – winning two of the last four Nestor Cups and playing regularly in Division 1 – there’s a part of the psyche that wants nothing more than the type of enmity that can only be reciprocated between true peers.
Certainly there’s a healthy rivalry there, one that’s particularly intense around the border between the counties. But hatred? Come on.
For the most part, Mayo occupies the Don Draper role in this relationship. If he truly believes otherwise, then there’s only one logical conclusion: Frankie’s gone to Hollywood.