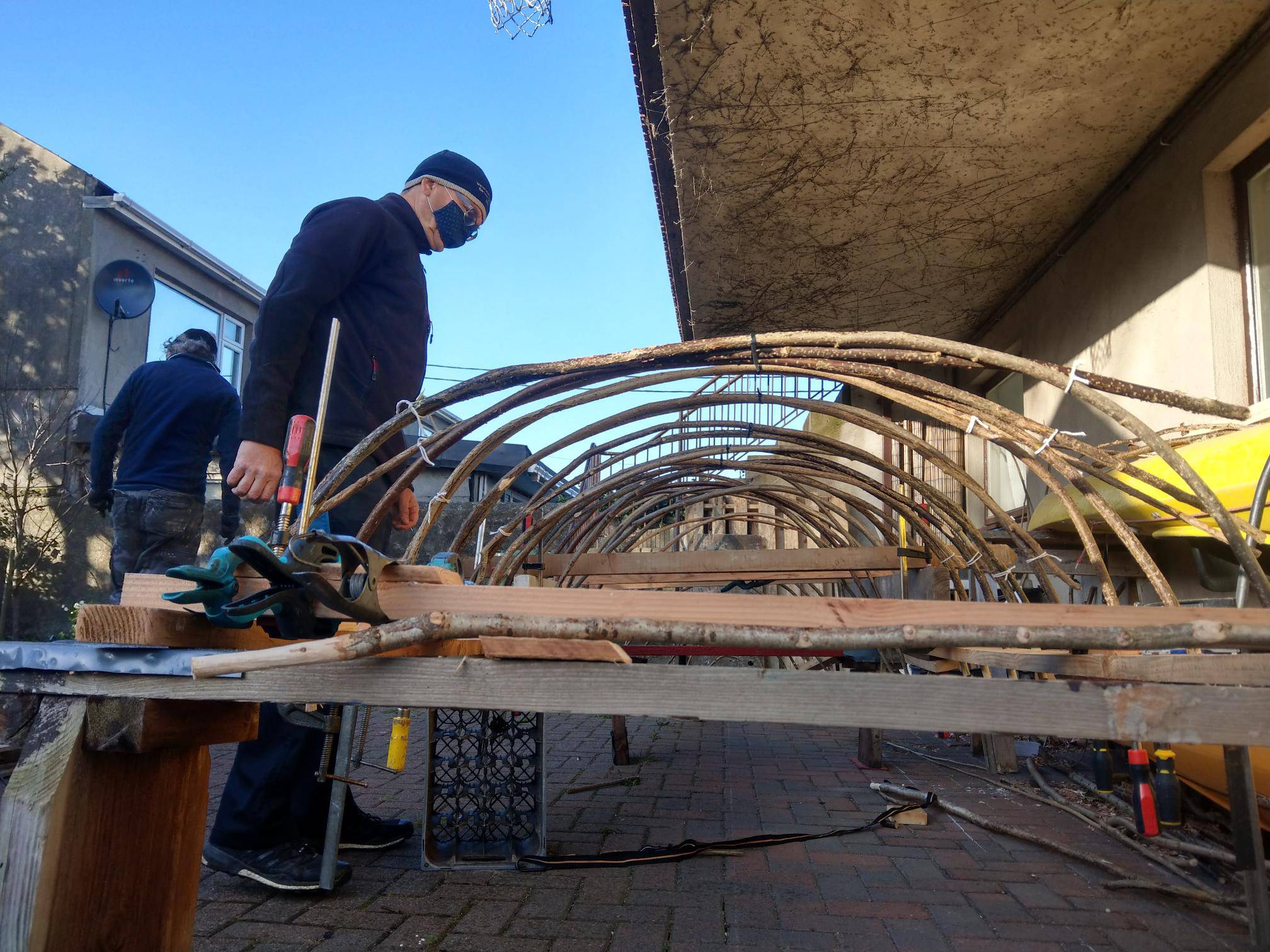 Building a Dunfanaghy currach from the original specifications.

A group of enthusiastic currach builders in Dublin can trace their roots to Mayo, writes Sharon Ní Chuilibín

Sea currach making was one of 30 traditional crafts to receive official recognition in 2017 when Ireland ratified the 2003 UNESCO Convention for the Safeguarding of the Intangible Cultural Heritage. For thousands of years, the knowledge, craft and skill of building and sailing currachs has been an integral part of the Irish story, particularly in the west of Ireland. Before the advent of fossil fuels and outboard engines, our traditional Irish currachs played an essential role for adventurous Irish monks and generations of fearless fishermen who braved the wild Atlantic ocean.

Shane is not the only currach builder of Currachaí na Sceirí with Mayo roots. Tony Moran, a Killala man, went to school in Lacken and Finbarr O’Connor of Knockmore rowed and fished with his father on Lough Conn. Shane Holland also remembers sailing off Lacken as a child. Shane’s father, John Holland, now aged 91, was born in Killala, his grandmother Lena and aunt Gretta ran Killala Post Office and his cousin‘s wife Marie currently runs it.

Since Shane got involved in building currachs, his father, John has been sharing memories from his youth, recalling the fun of Killala currach races. As a 12-year-old, he would have travelled with the lads from Belderrig on turf lorries. Those were days before tarred roads. It was quite an adventure for Shane’s dad, especially when those lorries would get stuck!

As a child, Shane remembers seeing currachs being tarred by the shore in hot summer sunshine and stacked up by the dozen like beehives. Returning 30 years later, as a sea kayaker, he was struck by the fact that these currachs were no longer to be seen and the need for a revival.

In 2015, the National Museum of Ireland sought project proposals to celebrate the 1916-2016 centenary. Shane pitched a project to involve researching and building a traditional currach which would then travel around the country. Although shortlisted, Shane’s proposal didn’t win yet he was undeterred.

Together with Currachaí na Sceirí group, it was decided to build a currach on their own. To learn the craft of currach building, Shane joined expert currach builder Claidhbh Ó Gibne who is based on the Boyne River in Co Meath. Clive is well known as the builder of Bovinda, a large animal-skin currach to prove that currach-based skin boats could have been used to bring the stones up the Boyne river 5,000 years ago to build Newgrange. A Tory Island currach found rotting in a garden in Drogheda was their first project and, once restored, this was then launched in the sea off Donegal.

Currachaí na Sceirí then went on to build their first currach together as a group in 2018 following Shane’s unique design, rooted in the west of Ireland boat-building traditions. Their boat incorporates styles of west Clare, Galway and Achill featuring a high prow for the Atlantic waves. During lockdown, a Dunfanaghy-style currach was added to the Skerries currach fleet.

While Shane takes the approach of adapting and re-designing – making improvements where he can, Dunfanaghy Currach builder, Donal Mac Polin is circumspect in reflecting on this fragile tradition.

“I like to build what I consider to be a ‘true’ copy of the last currach built by the traditional currach builder of Dunfanaghy, Jimmy McElhinney, who gave me the specifications. I think it’s a beautifully designed currach caught at one point in that currach’s evolution. Shane built his version based on my published plans and Meitheal Mara in Cork build another very successful version modified and re-designed by Padraig O’Duinnin.. All are equally valid.“

Today, the currach as a working boat has ceased to evolve. One wonders how many currach builders continue to ply their craft along the western coast today whose skills may die with them. For Mac Polin, as with Shane Holland, the beauty of the craft itself and the particularity of the design are certainly something worth saving.

“These are old human skills teaching people to make something themselves they can use in the sea,“ Mac Polin muses, “that‘s a phenomenal thing to give to people. Today, its not about the boat, its about the boat as a catalyst for bringing people together and teaching about sustainability and a different way to relate to the environment, the sea, and one another.“

Shane has shared his currach plans with enthusiastic currach builders in Tipperary and Cork, encouraged that people are building currachs and that there is a revival around the country. 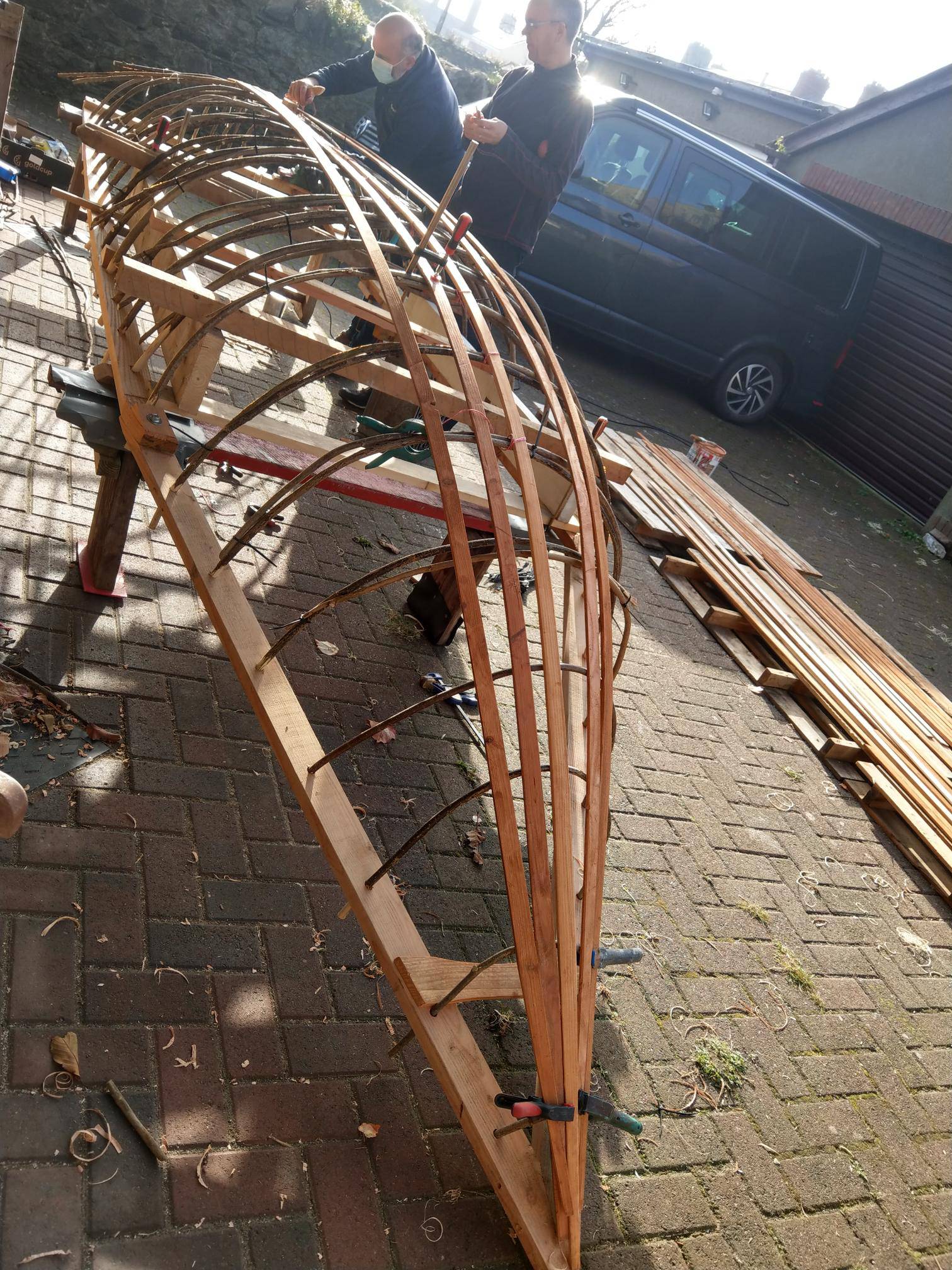 Currach building in Skerries in Co Dublin where a group of enthusiasts is reviving an old tradition.

On August 21 next, Currachaí na Sceirí will host the ‘Three Island Challenge’ in Skerries, Co Dublin – inviting other currach rowing clubs to celebrate Ireland‘s unique maritime heritage, take to the water and test their skills.

This year‘s Three Island Challenge has to stay under 100 people in line with Government restrictions, yet there are great hopes for the future developments including the proposed visit of the St Afflam from Brittany in France. This 30-foot, leather-covered currach based on the Aran currach, plans to join next year’s Challenge.

Shane also hopes for a stronger Mayo contingent in future.

“We were trying to talk Mayo-based crews into coming to Skerries but there was not much of a response – hopefully, we can look to next year!“

While at home in rural Ireland, a currach may be a rare sight to behold today, we cannot forget that there is a strong diaspora of currach racing around the world. Currachaí na Sceirí had a recent visit from ‘Currach Queen’, Anne Ó Driscoll of the Boston Irish Currach Rowing Club who is a champion rower in Boston and Rosmuc. Due to the Viking influence in Skerries, the Irish-based Swedish consul has also taken an interest and is inspired by the Skerries currach phenomenon – traditional Viking boats may yet join the Three Island Challenge in future years.

“It feels fragile in Mayo as a tradition, it is important for us to breathe life into it,“ says Shane, “it is down to a handful of people to keep it going“.

Mayo has a number of key regional currach types including the Belderrig currach, the Achill Island currach and the currach of the Iniskea Islands. Mayo-based author Breandán Mac Conamhna has published a comprehensive overview of the Irish currach tradition in the Irish language, ‘Curaigh na hÉireann a stair agus a scéal’ .

Rather than being consigned to history, one feels that this rich Mayo tradition of building and sailing currachs may have much life in it yet; adventures to be remembered, and stories to be shared. These boats are symbols of the resilience, skill and tenacity of generations of west of Ireland people and a key part of our Irish heritage – one not to be forgotten.

Donal Mac Polin observes: “These complex and intangible skills have to be re-learned by this generation. Unlike with traditional music, you cannot make a fiddle, but if you love the sea you can learn to build and row a currach!“

If you have experience or knowledge of the craft of building traditional currachs of Mayo, Shane Holland would love to hear from you: [email protected] Old drawings, photographs or rough plans are all welcome and these can be dropped into Marie at Killala Post Office.