A vaccine that could save the All-Ireland Championship

In an imperfect championship season, 14 teams are already eliminated after two weekends of action. In the last few columns, I have been urging the GAA to be a bit more imaginative to breathe some life into an inter-county scene that has gone stale. Some weeks back, I floated the idea of an inter-county championship format that mirrored club championships with senior, intermediate and junior grades. Some people I’ve spoken to since met those suggestions with a mixture of curiosity and scepticism and pondered how such a new look championship would look in reality. So, in a throwback to my childhood days of generating mock draws for the FA Cup and World Cup, and dreamily hypothesising how the competitions would pan out, I will outline here my ideal All-Ireland Championship structure.

Teams were placed in each grading (senior, intermediate and junior) based on their National Football League finishing positions in 2021. Groups were randomly chosen using an online group generator.

This new structure would run for 13 weeks from Game Day 1 to the All-Ireland Final. The National League, although an excellent competition, would be abolished as the new championship resembles a league format during the group stages.

Can you imagine the welter of anticipation as Mayo welcome Dublin to MacHale Park in a Saturday night championship battle just as the clocks go forward in late spring and the summer is about to ignite? Or the giddy excitement of the colourful cavalcade of Mayo diehards heading to Newbridge, Clones or Armagh for a road-trip of weekend championship football?

The beauty of this format is that it provides lots of high-quality, competitive games but also some jeopardy as there is a fine line between finishing second and fourth in your group i.e. an All-Ireland semi-final or a relegation playoff.

Consequently, every game should matter going into the final round of games, without any dead rubbers, which can only be a good thing.

By grading the championship, some people will pooh-pooh the above proposals as being elitist, exclusive and dismissive of the weaker counties but that is the exact opposite of what I am trying to achieve.

I believe this reconfiguration benefits everyone but would especially reinvigorate those counties who have been languishing hopelessly in the lower echelons for years.

The team whose progress I have enjoyed following the most so far in this slow-burning year has been Offaly as John Maughan once again used his charisma to work the oracle in the Faithful County. Offaly won’t win an All-Ireland Championship, and not even a Leinster Championship, in the foreseeable future but their run to the Division 3 final and recent titanic tussles versus Louth and Kildare, reawakened Gaelic football in the county.

Maughan was adamant that their League final against Derry be played in Croke Park as he emphasised that playing there was a big prize for “a team like Offaly”.

He explained how “only five or six of the squad have ever played in Croke Park and quite a number of them have never even been to Croke Park.”

In a reimagined All-Ireland intermediate championship, Offaly would have a huge opportunity to regularly qualify for the latter stages in Croke Park and, what’s more, would have a fighting chance of securing silverware, something that is inconceivable in the current championship format.

For further evidence that this revamp will boost every county, consider the local club scene. Try telling intermediate or junior clubs around the country that the senior championship is the only show in town.

Ask Kiltimagh, who have been so tantalisingly close to landing the intermediate championship many times in recent years, if they’d turn their noses up at the Sweeney Cup. Ask my home club Shrule-Glencorrib, who have been training like demons lately, if junior titles don’t matter.

Was Westport’s march to intermediate All-Ireland glory in 2017 not the catalyst to them becoming a serious senior side that provides the inter-county team with talent aplenty?

Did Clonbur GAA club not have their greatest day in the club’s history when clinching the All-Ireland junior prize in 2012? In short, junior and intermediate titles matter a great deal at club level and could become much-coveted at inter-county level too if packaged correctly.

Of course, it isn’t just a fait accompli that this new championship structure would be a resounding success. The GAA and GPA would need to work hard to get buy-in from players, supporters, county boards and provincial councils. 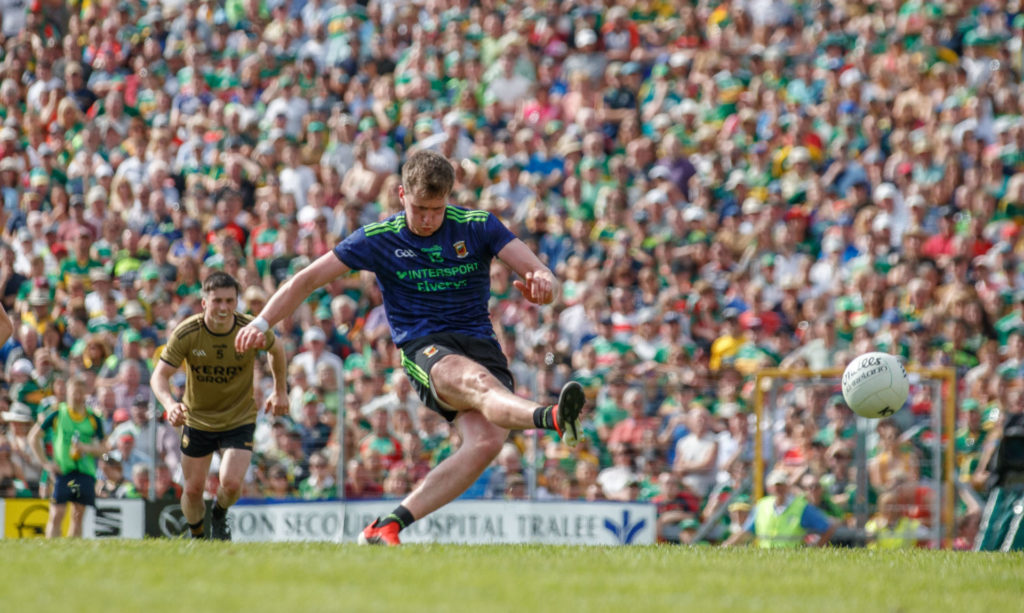 Cillian O’Connor scores a point from a late penalty during Mayo’s trip to Killarney for an All-Ireland SFC ‘Super 8’ clash with Kerry in 2019. Picture: INPHO/James Crombie

The senior championship would retain the Sam Maguire trophy. The intermediate and junior grades, however, would need new metal but there is a myriad of great gaels out there worthy of having such prestigious awards named in their honour.

It would be vital that the intermediate and junior competitions get the same marketing budget and that players from counties competing in these events get equal, if not more, exposure and airtime around games.

To this end, I would love to see an All-Ireland Final weekend in late August – a veritable festival of football!

The All-Ireland junior and intermediate finals would take place on Saturday evening, while the minor final would still precede the senior decider on the following day.

And what about the club game in this summer bursting with inter-county action? Well, club leagues would need to run concurrently to the inter-county championship season during spring and summer, minus inter-county players.

Come September, however, all inter-county activity will have finished, leaving September and October for club championships, in much the same schedule as this season’s club calendar.

The above proposals are just my tuppence ha’penny worth, but as the All-Ireland series inexorably rolls towards another August when once again just the big-shots will be left gun-slinging, something needs to change. In a time when vaccinations are the talk of the town, I would call on the GAA to give Gaelic football its own shot in the arm by rethinking the championship structure.