In his first of a regular column in which he will analyse Mayo’s run through the 2021 senior football championship, former Mayo manager Pat Holmes believes that the team’s recent Division 2 league campaign has generated more questions than answers.

And so it starts all over again.
First things first, I think there’s a real opportunity for some team to release Dublin’s grip on the Sam Maguire Cup this summer. I’ll expand on why in just a little while. Of course, the big question then is, can that team be Mayo? I’ll reveal my opinion on that matter in due course also.
Much less of a secret is the fact that it would constitute a major, major shock if Mayo didn’t commence their Connacht SFC campaign with a comfortable victory over Sligo next Saturday. The Yeats County, stuck in Division 4 of the National Football League, and Leitrim, who await the winners of this Markievicz Park clash, are among a group of county teams currently flailing as the inter-county game becomes ever more professional.
Is it that the strong have gotten stronger or is it that certain teams have disimproved? It’s probably a little of both. Some teams have raised the bar to an extent that counties at the other end of the spectrum appear to be struggling with the new standards brought into Gaelic football. But not only are some of these counties headed in an opposite direction, they are quite disillusioned at their situations. You only had to read the remarks of Tony McEntee in these pages last week for proof of that. 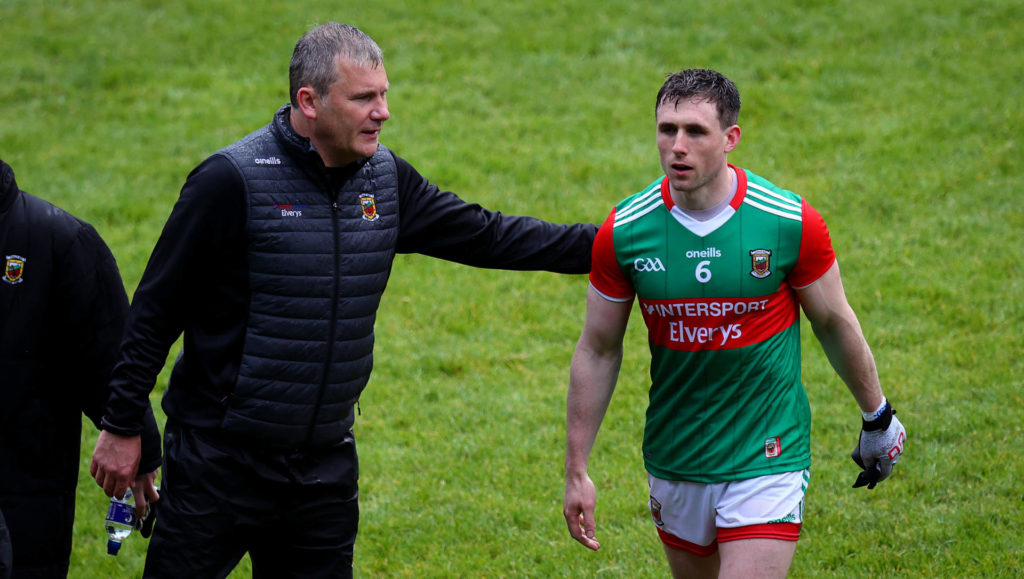 Mayo manager James Horan with centre-back Paddy Durcan. Although Durcan was captain of the side for all four league games, that role has been picked up by Aidan O’Shea for the opening round of the championship against Sligo. Picture: INPHO/Ryan Byrne

I felt it a very defeatist attitude from the Sligo manager when he intimated it was just about all his team would do to turn up and play this game against Mayo and that really his only hope was that the players would leave with their pride intact.
Granted, Sligo have not had a good season but nor do I believe a manager should be making his excuses before the game has even been played. You’ve always got to believe you have a chance, football is only ever 15 against 15 and anything can happen. But yes, it is hard to see anything other than a Mayo victory, and a Mayo victory over Leitrim a fortnight later for that matter, leaving us back in another Connacht final with an opportunity to retain the Nestor Cup.
There’s no question but that the loss of Cillian O’Connor to an Achilles injury is absolutely huge to this Mayo team. For the past eight or nine months he had, in my opinion, been playing the best football of his career. His absence adds a sense of a lottery to this year’s championship but although Mayo could easily have lost last year’s Connacht final to Galway even with Cillian on board, I still believe the Green and Red will win this year too – providing they address a few key aspects of their set-up.
In fact, for all that it’s great to be heading into a provincial campaign with the momentum gained from four straight wins in the National Football League, Mayo’s run of matches in Division 2 has, for me, probably generated more questions than answers, not least because Diarmuid O’Connor is also in the sickbay and so not only has his older brother’s absence left Mayo searching for a full-forward, but there’s a big gaping hole in the middle of the park too.
Some people will say Aidan O’Shea is the one to partner his Breaffy club-mate Mattie Ruane but for all his strong attributes, I don’t believe Aidan is best suited to playing as a midfielder and needs to be stationed close to the opposition’s goal as a No.13 or 14. We need only look back to last Sunday week and how effectively Clare, using Darren O’Neill, adopted the high-ball tactic against us, so for us to possess a player of Aidan O’Shea’s ability and deploy him as a target man seems an obvious solution to the full-forward conundrum.
That said, there’s no point having a big man on the edge of the square unless he is provided quality ball, which would lend weight to the idea of returning Conor Loftus to the midfield berth that he occupied alongside Mattie Ruane during last year’s run to the All-Ireland final. He’s not in the same ilk as Ciaran McDonald who all of a sudden could deliver a 35- or 40-yard pass to change the direction of the play, but Loftus is a good foot-passer nonetheless, and if there is a criticism of this Mayo team’s middle third, it is their tendency to play laterally and to carry the ball – Ruane being a case in point, excellent though he is in other areas of his game.
Try all that against the better teams and if you’re not turned over, you’ll at least find your forwards are having it very difficult to create openings due to how slow the ball has arrived into the danger zone. So, quicker delivery from the middle third into a ball-winner is the way to go with this Mayo team.
That’s something Ruane, Loftus and the half-forwards and half-backs in general should focus on, providing good quality, diagonal ball, not from too far out the pitch, in on top of Aidan O’Shea. Kerry were masters of that floated 30- to 35-yard pass when having Kieran Donaghy at full-forward. Anything coming from further out the pitch and any good defence is able to deal with that.
Another consideration in Mayo’s attempt to defend their provincial prize is that the young players who did very, very well last year are now carrying a weight of expectation. A lot will depend on how the likes of Oisin Mullin, Tommy Conroy, Ryan O’Donoghue, Eoghan McLaughlin and Bryan Walsh react to that added pressure. They are no longer unknown quantities and on top of that, last year they were able to bed in when there were no crowds at their matches – something that is likely to change this year.
Of course, there’s a benefit to these lads having had a season under their belts but nor is second season syndrome, whereby players struggle to maintain their impact, an uncommon affliction either.
Hopefully all we see is yet further improvement from that quintet and from others too. 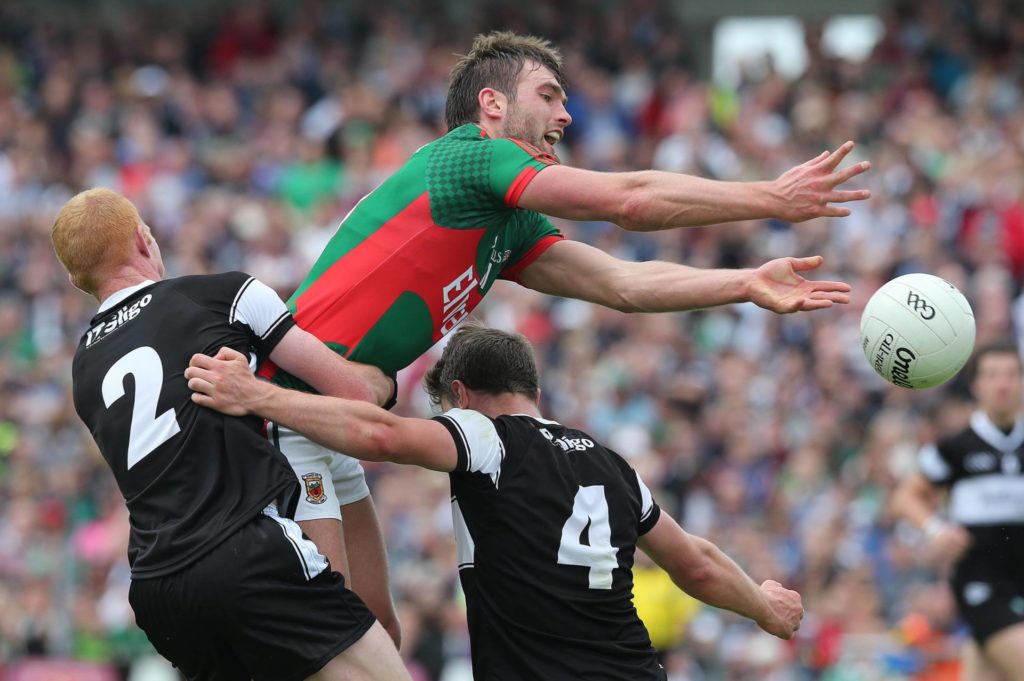 Moving Aidan O’Shea to the full-forward line in the absence of the injured Cillian O’Connor is an obvious option. O’Shea scored a hat-trick of goals against Sligo in the 2015 Connacht SFC Final, despite the best efforts of Ross Donovan and Daniel Maye (pictured). Picture: INPHO/Lorraine O’Sullivan

Believing Mayo will be crowned Connacht champions is one thing, but what about their All-Ireland aspirations? Like I said at the beginning, I have a suspicion Dublin could be vulnerable this year if a serious challenge is posed, but if I’m being totally honest it’s difficult to see that challenge coming from Mayo based on the evidence of the National League. James Horan trialled a lot of players but I wonder would he have been better off trying fewer and aiming for a more settled team. It’s difficult to achieve consistency amidst so much chopping and changing.
Mayo conceded seven goals in four matches against mid-standard opposition. Within the defence, we have some brilliant footballers – you only have to look at Oisin Mullin, Lee Keegan and Paddy Durcan – but they and others are very attack-minded and we seem to have very few out and out defenders who like to ‘mind the house’. You can get away with that when playing in Division 2 but when it comes to playing the elite teams in championship, you have to have a system that ensures things are protected at the back – and that wasn’t obvious in Mayo’s play during the league games. That’s not to say we won’t see improvement in the weeks ahead but as of now, the defence is certainly a concern.
Any opposition manager who sits down to analyse Mayo’s most recent performance against Clare will note the consternation and panic caused when Clare’s big midfielder, Darren O’Neill, was moved to full-forward. Mayo just don’t have somebody as physically imposing at the back; Oisin Mullin is playing full-back but a lot of people would argue that his attributes are better suited out the field, Lee Keegan is a half-back playing in the full-back line and this will be Enda Hession’s first championship. Mayo are at risk of coming under serious pressure aerially.
A safer bet to be able to ask the hard questions of the Dubs this year would seem to be Kerry. Yes, Dublin have an unbelievable record in replenishing their team with two or three new faces each year but a good number of their squad have six All-Ireland medals, more have three or four, and I just think that if some other team can really get to the pitch of things this summer, there’s no guarantee the holders will have the belly for the fight. Let’s wait and see.

The Pat Holmes Column will return in next Tuesday’s print edition of the Western People in which the former Mayo boss will give his verdict on the Connacht SFC quarter-final between Mayo and Sligo.