Marren reflects on a life in black and white 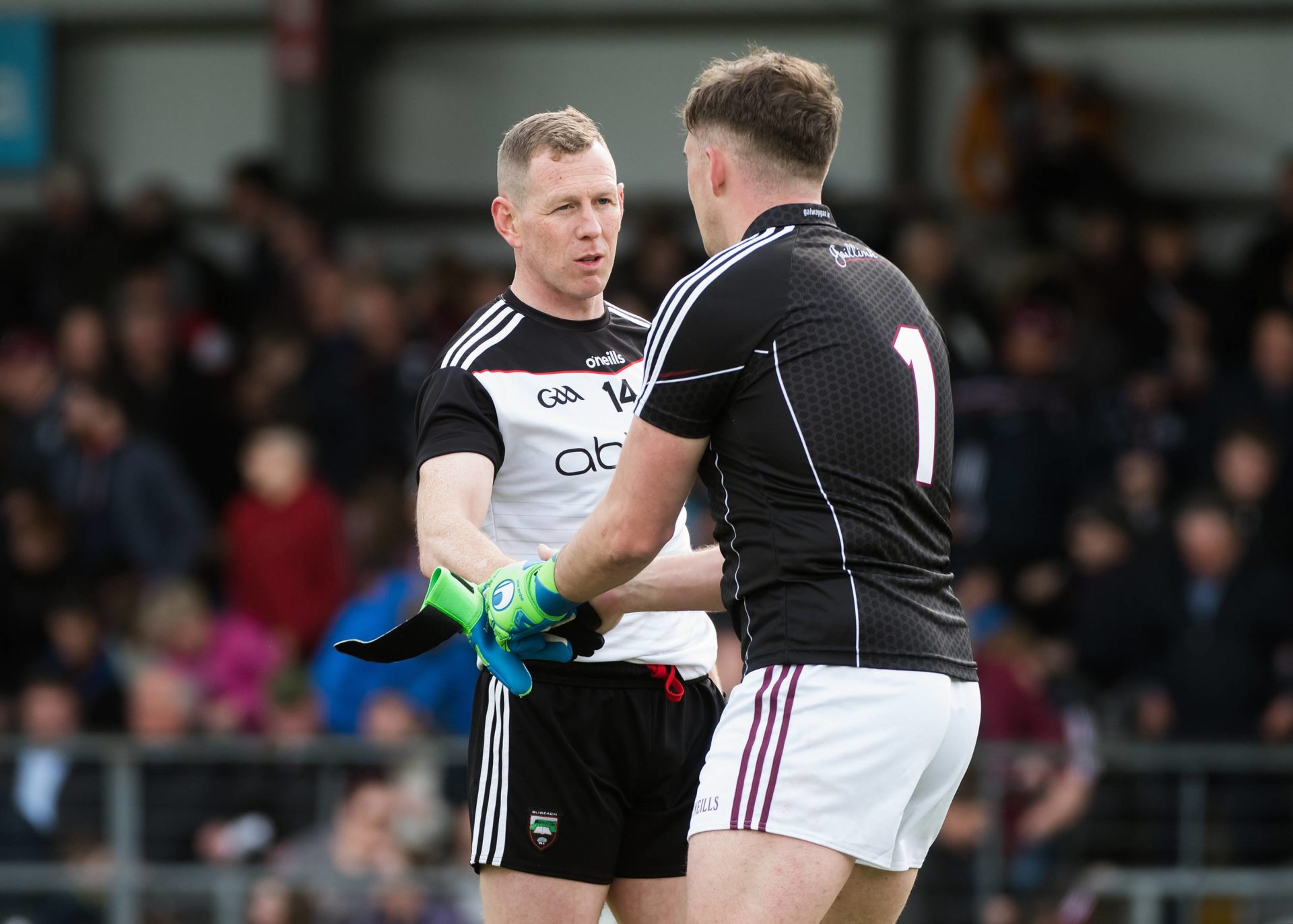 Adrian Marren shakes hands with Galway goalkeeper Bernard Power at the end of the Connacht SFC semi-final in Markievicz Park in 2019. It turned out to be the Curry man’s final provincial championship match for the Yeats County. Picture: INPHO/Evan Logan

In almost any year of the last decade-and-a-half, Adrian Marren would be doing his best to keep his head down around Curry and Charlestown country this week, doing his own thing and trying to avoid the worst of the chat ahead of a Connacht championship opener between Sligo and Mayo in Markievicz Park.

But this year is different for Marren, who decided to call time on his inter-county career last September after 16 seasons of senior football in black and white. It’s coming up on a full year since he announced that decision, but ironically it’s only over the last fortnight or so, as the long evenings stretch out toward the start of the championship, that he’s missed being a Sligo footballer.

“It’s only the last week or two that you’d really be missing it, on the nice evenings when you would have been heading for training. You’d probably be shooting into Markievicz this time of year for training, knowing that you’re going to be playing there. All the hard work and slogging is done and now it’s plenty of ball work and the nice part of it,” said Marren this week.

“When it’s Mayo especially, a big team coming down, one of the top two or three teams in the country. That’s when you really would start to miss it alright.”

But for the most part, Marren is happy with his choice. He had been used increasingly sparingly by Paul Taylor, his ex-teammate turned manager, through the early part of the 2020 league and the long stoppage caused by lockdown gave him time to pause and consider whether what he was getting out of county football at this stage of his career was worth all he was putting in.

“I found during the first lockdown, the time that I had off where I would usually have been training with the county, it was chalk and cheese. You just put so much time into it,” offered Marren, who works in maintenance for Tesco branches around Connacht.

“And for 15 or 16 years I loved it, it wasn’t that I ever had any doubts any year the phone call came in October or November. There was no mulling over it. But when the lockdown came and you realised the time you’re putting into it… I’ve two young kids and my wife is self-employed as well. I was gone all the time and it wasn’t easy at home.

“I wasn’t getting as much game-time as maybe I thought I should be getting. I had a chat with Paul in September before we went back in with the county, and it was an easy enough decision by the end. I was going to find it hard to go back to training two or three nights a week, plus all the gym work, and not really getting much game time.”

For a decade or more, alongside the likes of Mark Breheny and David Kelly, Marren was a central component of a Sligo forward division that regularly went eyeball-to-eyeball with their traditionally stronger rivals in Connacht. He was there when they ended the 32-year wait for the Nestor Cup in Hyde Park, and for the days out in Croke Park, against Cork in 2007 and Tyrone in 2015. He played in four Connacht finals. But for a lad from within a stone’s throw of the border in Bellaghy, championship games against Mayo always had their own magic.

“I would have played a bit of soccer with Charlestown, and anyone from Curry would socialise in Curry and Charlestown. You’re listening to Mayo football talk night and day; there’s no getting away from it,” he said.

“We do love to see Mayo getting to All-Ireland finals because that’s when we hold the raffles and make money out of All-Ireland tickets!

“It’s a rivalry that probably isn’t as big as it should be – Sligo have kind of gone back the way and Mayo have taken over. Maybe in another couple of years’ time, Sligo could be back up at the level Mayo are at and the two could be competing again.” 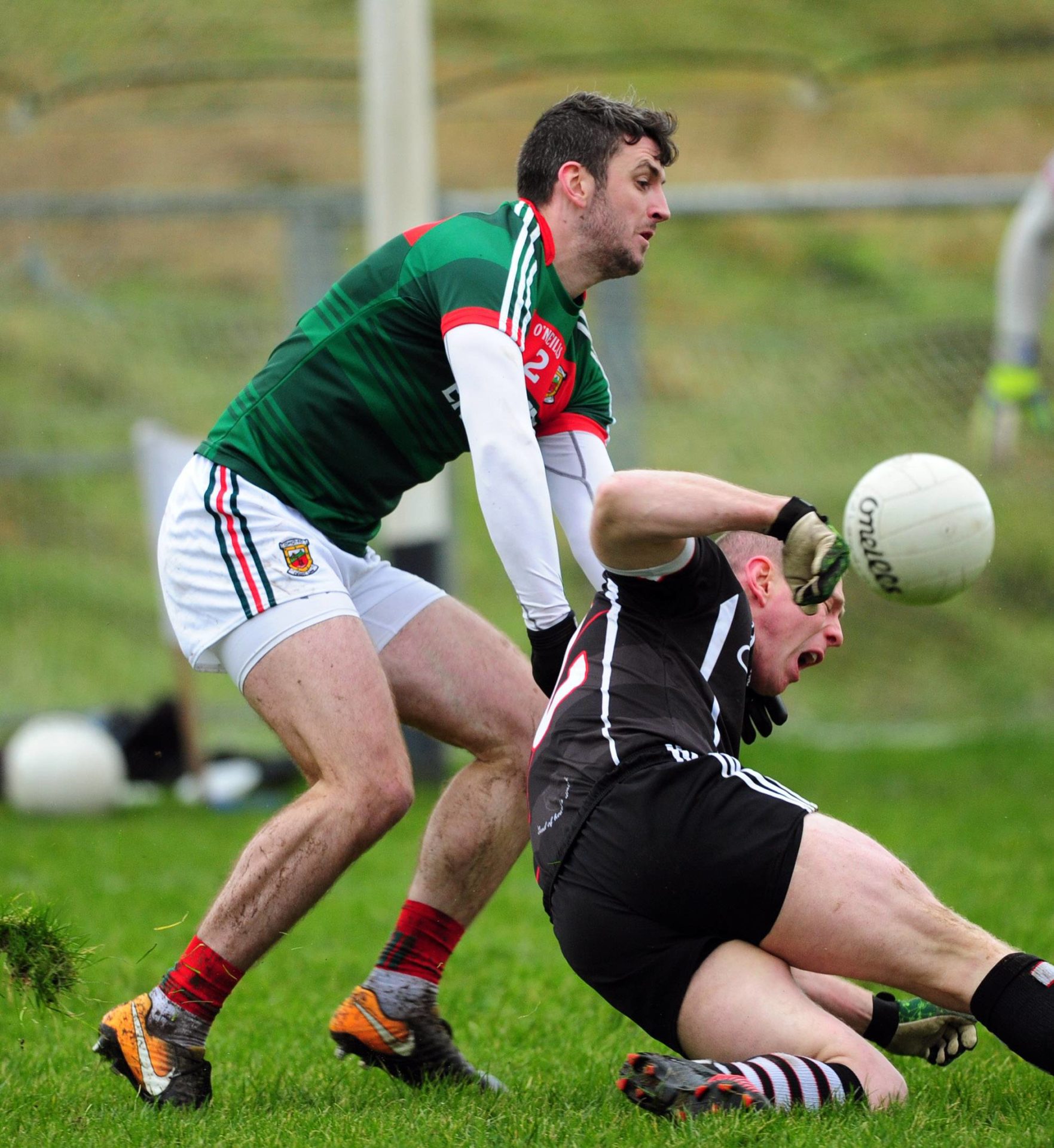 Adrian Marren is tackled by Brendan Harrison during an FBD League clash between Sligo and Mayo in 2018. Picture: David Farrell Photography

Marren, like several of that Sligo team that coalesced around 2007, freely says that the team should have won more Connacht titles, at least one, if not two. 2010 is the one people focus on most, when Sligo contrived to beat both Mayo and Galway but lost the final to Roscommon. But Marren reckons the decider of two years later was an even bigger opportunity missed.

“I would always say that 2012 (vs Mayo) was the Connacht final we really should have won,” he said.

“There were two points in it at the end, Mayo probably had that bit more experience and cuteness; there was no such thing as a black card back then, and Mayo used that to their advantage.

“Bar 2015, all our games with Mayo have been relatively tight. In 2017, Mayo got two goals towards the end, but even that was a good battle. Obviously 2015 is the one you’d want to forget.

“If Sligo had had a good league this year I think Mayo wouldn’t be looking forward to coming down to Markievicz. Whereas now, I don’t think James Horan will be losing any sleep about Sligo. Mayo came out of Division 2 at their ease whereas Sligo struggled in Division 4 and only won one game.

“Had they won more games or got promoted, they might be coming into the game with more confidence like we were in 2010 and 2012 when we were winning leagues. We were still a division or two below Mayo but we knew we could compete.”

They did compete – and consistently. Ignoring the blowout in the 2015 Connacht final for a moment, Mayo won the three championship meetings between the sides between 2010 and 2017 by an aggregate of just five points. Marren said Sligo always felt they had a chance within the province.

“I don’t think we have that at the minute. Back then we had a massive panel of players with experience of winning a Connacht final in ‘07. Kevin Walsh came in then and gelled us together a bit more. We weren’t far off Connacht for four or five years in a row there.”

He accepts that Sligo have fallen a long way back in the last three to four years, to the extent that it would be a genuine shock were they to even compete with Mayo in Markievicz this weekend. Marren puts the regression down to a lack of desire on the part of club players to be involved in the county set-up, and a sort of vicious cycle which means the team won’t improve while the players aren’t willing to commit, but the players won’t commit while the team is poor.

“I’d say when Tony McEntee came in, he didn’t realise the rebuilding job that had to be done. I know there was a good nucleus of a team there but it’s probably hitting him now that this is going to be a two or three-year project, at least,” offered Marren. “The enthusiasm with club players in Sligo to go in and represent their county doesn’t seem to be there like it is in Mayo. I do a lot of my work in Mayo and night and day, it’s football, football, football. In Sligo, there’s no mention of Gaelic football.

“I was in Ballina the other day, and they were on about what team Sligo will have out in a week’s time. They won’t even know about the team in Sligo until the Saturday before the game.

“Over the last four or five years, you’d notice it more. There are some very good club players in Sligo but they seem to be happy enough to play with the clubs. Maybe they don’t want to give the commitment to go into county football, for it to take up four or five days a week. It’s like the grá isn’t there in them, compared to Mayo.

“Maybe that’s because Mayo have been so successful over the last ten years, that everyone wants to play with the county team. In Sligo it’s the other way round. Maybe players don’t want to go in and play three or four Division 4 games, one championship game and that’s it, after a full years’ commitment.

“I don’t think the players are coming through like they are in Mayo. In Mayo they seem to be adding four or five players that jump nearly straight onto the 15 every year. Whereas in Sligo, you might get one or two every two or three years. That’s why we are where we are at the minute,” he concluded.