The day I went shopping with Cillian in Manhattan

Although Sligo had a difficult league campaign, only beating Leitrim, the personnel in their management set-up could make Saturday’s fixture tricky for Mayo. In Tony McEntee and Joe Keane, Sligo have two men who know the Mayo players and set-up very well. I played under McEntee for six months at the start of 2016 when Stephen Rochford was in charge. My abiding memory of his training was a barbaric session we had on the top pitch in MacHale Park two days after Christmas. For over an hour we pummelled tackle bags as McEntee gleefully designed a session that was definitely borrowed from the winning fields of Crossmaglen. Mayo were always tactically astute and innovative during Rochford’s reign so we can expect McEntee to formulate a shrewd plan to somehow stifle Mayo on Saturday.
Another member of the Sligo backroom team with Mayo links is Sean Boyle from Mayo Gaels, the squad’s S&C coach. I have worked with Sean over the recent winter months on Gaelic football-specific conditioning programmes and have found him excellent. He is a colleague of Mayo’s S&C lead Conor Finn at AXSOM Sports so we can expect both teams to be in optimal championship nick at the weekend.
Of course, the biggest difficulty Mayo will have on Saturday will be coping with the loss of Cillian O’Connor. There was a pall of gloom last week as our championship prospects significantly dimmed when it was confirmed O’Connor had undergone surgery on his Achilles injury. Whatever about the county’s collective disappointment, above all I feel really sorry for Cillian. He was in prime form this past year and was looking as fit, strong and sharp as he’s ever been. 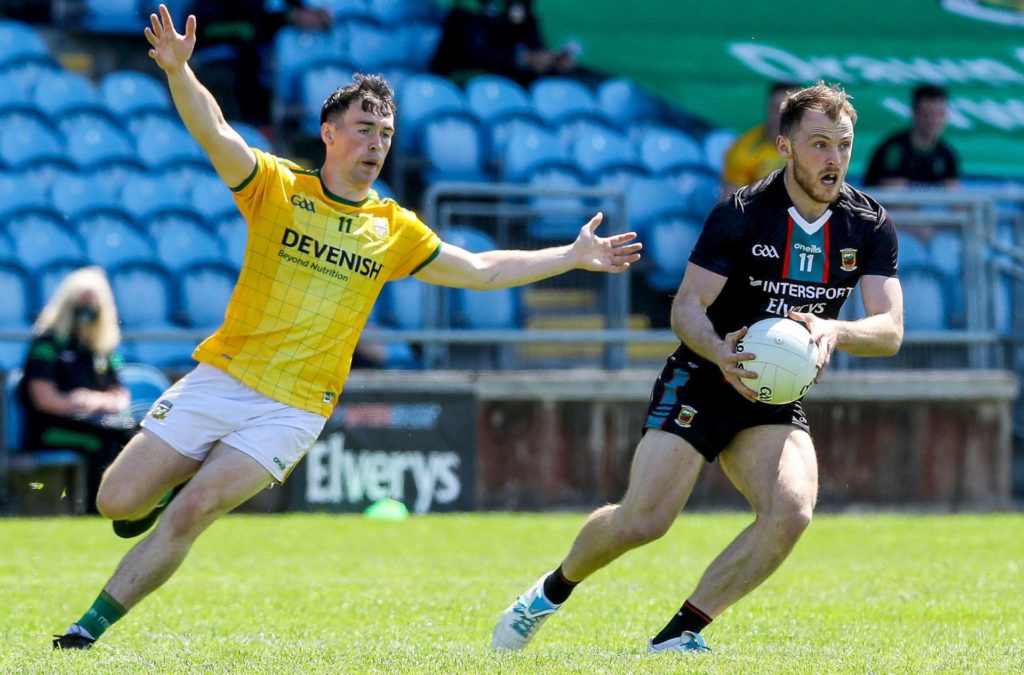 Darren McHale goes by Darragh Campion in Mayo’s Division 2 clash with Meath. The Knockmore man has been called into the first XV in the absence of Cillian O’Connor.

It’s also a blow for the younger lads in the squad who would have looked up to O’Connor and relied on his guidance and leadership as they tried to navigate their fledgling years at senior inter-county football. On this point, we played a FBD Final versus New York in the Big Apple in 2011. It was more of a junket than any serious football match as we travelled with a skeleton squad of barely 20 players.
The day before the game I was shopping in downtown Manhattan with Cillian and Enda Varley. As we flitted from shop to shop, our thoughts turned to the following day’s game versus the unfancied New York. We all expected to win but were desperate to avoid the ignominy of defeat and I distinctly recall Cillian saying “I’d be more confident if Andy was playing”. Andy Moran, our leader and best player, couldn’t make the trip for whatever reason.
I imagine that is how a lot of the younger Mayo players are feeling right now as they embark upon a new championship season; they’ll expect to go far but would be much more confident if their talisman, Cillian, was playing.
But the silver lining to every injury cloud is that it provides an exciting new talent a huge opportunity to impress. A big ask but I seem to remember a 19-year-old O’Connor flourishing when given his head and free-taking responsibilities in the pressure-cooker environment of a Connacht final in a rainswept Hyde Park in 2011. O’Connor hasn’t looked back since, going on to become a ruthless marksman.
Now is the time for this young Mayo squad to also look forward with similar conviction.

You can read the full version of this article in the print edition of this week’s Western People or purchase your digital copy at www.westernpeople.ie