The date was November 18, 2008 — a Tuesday – and quite how it came to there being so little time to publicise the event I cannot now be sure, but it was on that day there first appeared notice in the Western People, in other local newspapers and on Midwest Radio, that the most successful coach in the history of US college athletics was, on the following evening, going to give a public talk in the county he was proud to call home. 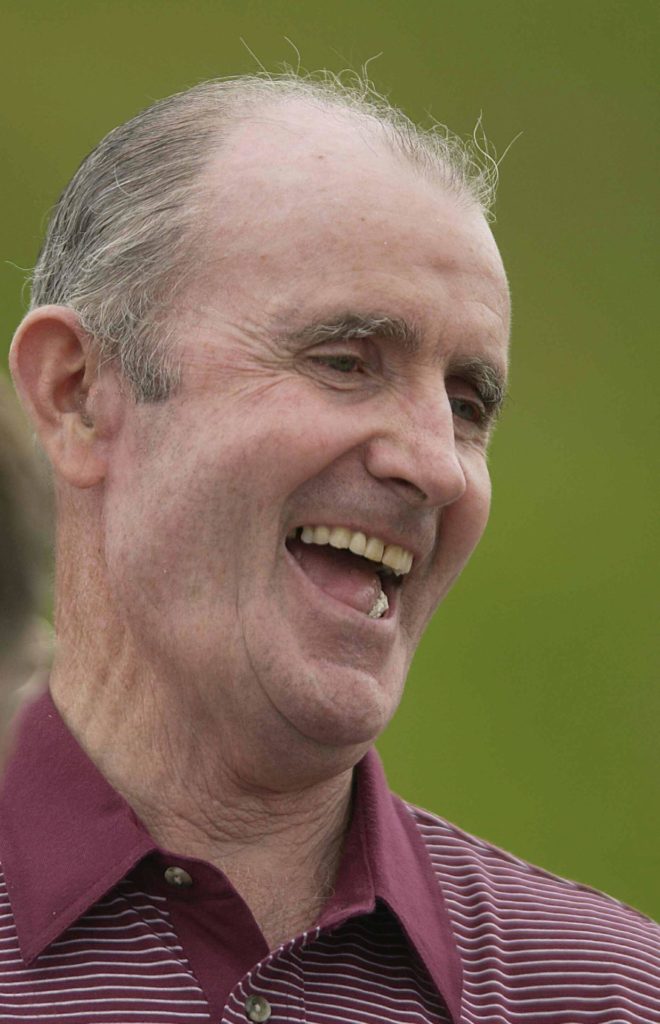 John McDonnell pictured in 2003 when the track and field coach at Univerity of Arkansas attended the Woodie’s DIY National Senior Track and Field Championships in Dublin.

It was a testament of John McDonnell’s credentials that 24-hours notice was all that was required for him to pack the conference room of Breaffy House Hotel. Another week or two of publicity and the occasion might well have required the space of the adjoining International Events Arena that just three nights earlier had been full to the brim for Henry Coyle’s return from Chicago for his first professional fight in Ireland on the undercard of Bernard Dunne.
Coyle was one of numerous high-profile figures from the domain of Mayo sport to attend McDonnell’s talk, entitled ‘Succeeding in Your Chosen Field’. Few people were more qualified than the man from Ardagh to hold court on such a topic.
John McDonnell’s accomplishments read now just as they did then — like those of 100 men. An inductee to the United States Track Coaches Hall of Fame, he was named national, regional or conference Coach of the Year a whopping 140 times; was coach to 54 American national champions; and over the course of six Olympic Games, coached 23 Olympians — gold, silver and bronze medal winners among them.
In fact, at the time of McDonnell’s visit to Mayo in 2008, even though he had retired as head coach at University of Arkansas earlier that year, five Olympians were still retaining him as their coach — not bad for a boy from Ardagh who himself had only become interested in running when asked by his older brother, in preparation for one of the Moygownagh Sports held back in the 1950s, to set the pace for an 800-metres race. “He never caught me,” recalled John. 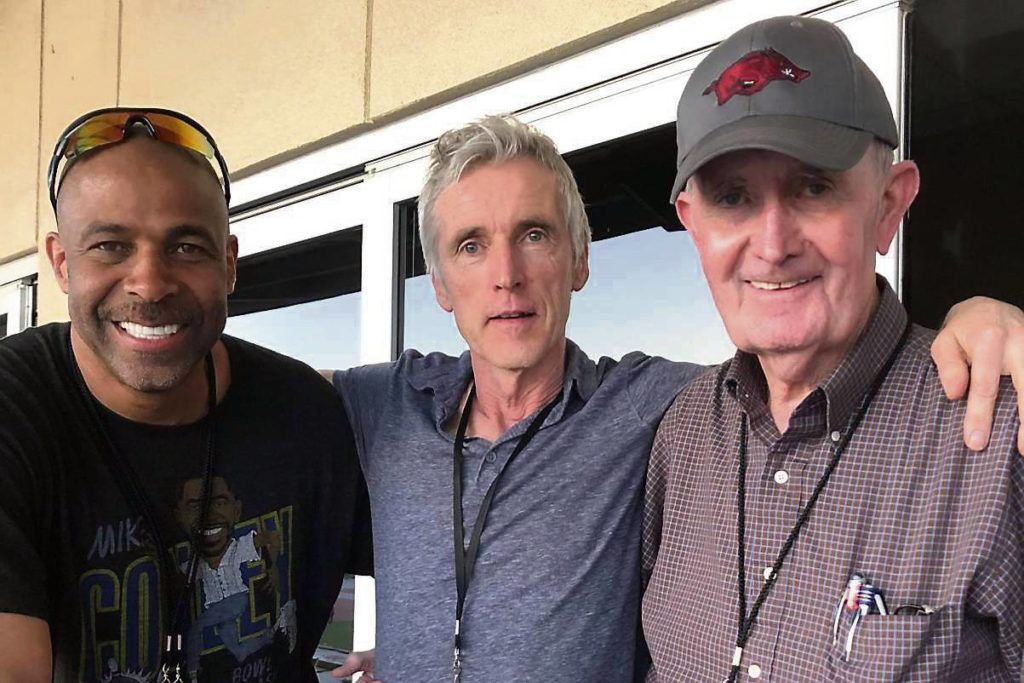 It was that alternation between humour and honesty, and an ability to blend modesty with an undoubted sense of pride in his achievements, that kept the then 70-year-old such an engaging companion as he waltzed his audience through a coaching career that had spanned all of five decades. Noting how his preferred form of punishment to any of his beaten teams was to ‘treat’ them to a McDonald’s meal, he was as comfortable discussing the low points as he was the high.
“Winning isn’t everything, it’s the only thing. It might be an old cliché but it’s true,” believed McDonnell who had been hired as Arkansas University’s cross country coach in 1972. He added the entire Track and Field programme to his remit in 1978 before eventually leading the track team to its first national championship at the 1984 Indoors.
“There was a time when, after three or four near misses, I thought I was never going to make it as a coach, but it was two of my own athletes who approached me and told me what my problem was, athletes who went on to become Olympic champions,” he explained.
“They told me I was giving too many instructions. It was a valuable lesson — don’t over-coach. By the age of 22 or 23, most lads have heard of everything they need to and the last thing you need is for them to be basket cases by the time they get to the start line.
“An old coach of mine once told me: ‘You can’t win the Kentucky Derby on a donkey’. We were fortunate at the University of Arkansas that we could recruit athletes so I’ve been fortunate to work with some of the best. Show me a coach that can recruit great athletes and you have a great coach. That was me,” he stated.
Hungry for information, and perhaps seeking that one nugget of advice that might transform their or their team’s fortunes, it was with great gusto that the attendance in Breaffy, which consisted of players, athletes, trainers, coaches, and managers across a broad range of sports, fired off question after question.
The unflappable Coach McDonnell afforded every query an honest and common-sense response, like when pinned on how to create winning attitudes and self-confidence.
“The type of training we do is not magic, it’s fundamentals,” he said. “Nothing has changed from the beginning of time; live a clean life, no booze, no drugs. You can scare some people into performing well but how many times can you get away with that before the athlete cops on?
“Remember three Cs and one D: conditioning, communication, concentration and discipline. The biggest problem with an athlete is their concentration.
“A well-conditioned athlete will be better able to concentrate because they can go further into the race before the hurt or pain begins to affect them. They will run the whole race. You run with your mind, not your body. If you run with your body you’ll never be worth a bum nickel.
“Communication is vital too. An athlete won’t compete for a person they don’t respect. You don’t have to be buddies but respect them and they’ll jump through hoops. Treat all athletes as individuals because each has different needs and talk to them the way they understand and listen and find out what makes them tick.
“Regards discipline, only the head man can have authority over discipline, not his assistants. If you’re the head man and you haven’t got that, you should be gone.” 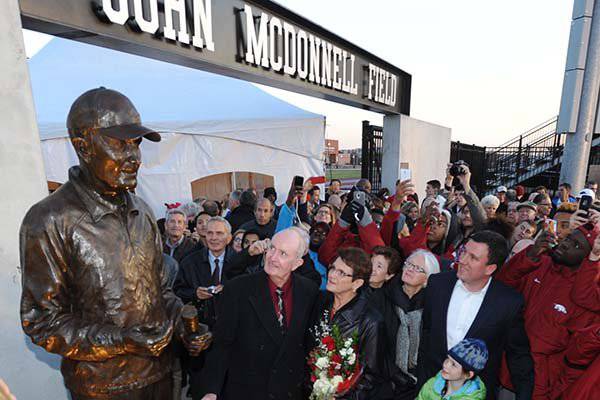 John McDonnell, former University of Arkansas cross country and track and field coach, and his wife, Ellen, smile as a cover is removed from a statue in his honour during a ceremony in 2014 at John McDonnell Field on the university campus in Fayetteville.

Another vital component between a coach and his athlete is honesty, maintained McDonnell, who was strongly opposed to the theory that by aiming for the moon but getting somewhere near would help any athlete or team achieve their ambitions.
“Always keep your feet on the ground and make sure you can achieve your goals. Don’t mislead guys. If a coach sets a four-minute mile target for his athlete but is delighted when his runner comes in at 4m05s, because that’s the time he really wanted him to achieve, that only confuses the athlete who can’t understand why his coach is happy with a time slower than was supposedly expected of him.
“If you want him to run 4m05s, ask for that time. If he achieves the set goal the athlete is ecstatic, is energised, is positive and will work even harder to improve on that time again. Negative motivation gets you nowhere. Always try and use the positives. The confused athlete is never quite sure what is expected of them,” he said.
And if one thing was for certain, it’s that those couple of hours in John McDonnell’s presence had left no one in any doubt but that his athletes knew exactly what was expected of them.
In 1984, his University of Arkansas track team was voted by Track and Field News as the greatest ever. It was a mantle they were forced to surrender in 1994, but only to McDonnell’s latest incarnation. The Razorbacks, by which the university team is known, ruled America.
“I never made a decision on which one was the best,” mused McDonnell, who concluded with an interesting observation about the pursuit of excellence.
“In the run-up to major competitions you’ll see athletes head off for altitude training but the benefit of that has been proven as being very, very slight. It’s the structure of the training that reaps the reward … you train your body like a machine. Humans make mistakes, they have off days, but every time you go on to the track or the pitch you want to perform to your best, just like a machine.”
Rolls Royce, Ferrari, Mercedes, Jaguar, you can name them all but none built a machine to rival that assembled in Arkansas by Ardagh’s finest export. America’s gain was surely Ireland’s loss. 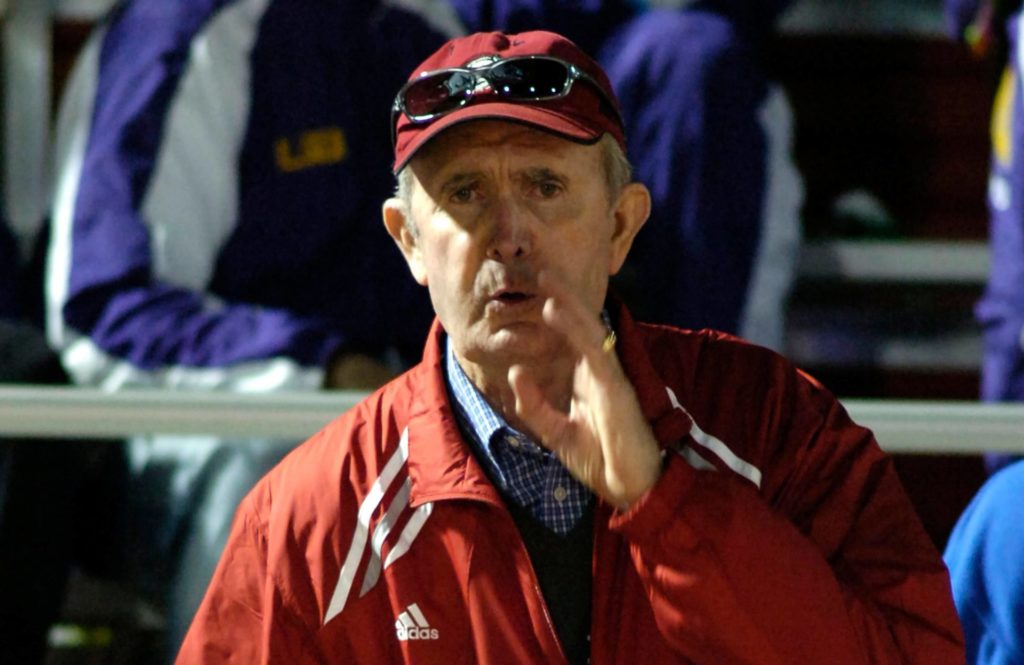 John McDonnell instructing from the wings during his near 40-year spell coaching at University of Arkansas.

Success and failure…
Winning is an attitude, losing is a habit. If you win the danger is that you celebrate too long and forget that the team you beat is already concentrating and preparing for the next time.

Diet…
Eat red meat twice a week. It’s the quickest way to get iron into your system. Weigh in often and during the off-season stay within two or three pounds of your racing (playing) weight. You’ll find that weight at the time you’ve run your best race.

Discipline…
Never let them get away with anything. Sometimes the great athletes are lazy athletes.

Greatness…
Being a good team man can make you a great individual because if everybody executes what they’re supposed to, you’ll win.

The road to success…
Anything you try give it 100%. If you just want to stay in shape for health reasons then jog a few miles. If you want to be great, do it right or walk away.

African runners…
They have natural ability but above all, Africans are hungry to succeed, just like the Irish prizefighters in America were a hundred years ago when they couldn’t get jobs. $10,000 to an African runner is a lot of money, they’re hungry. When you get to the start line and it’s you against twelve of them, it’s hard.

Ice baths…
Our scientists told us we were mad when changing to ice baths instead of hot tubs., as was becoming the done thing. We had used hot tubs for years with our athletes and they’d hop into one after a long run on a Sunday and would be fine for another long run on Monday. When we changed to ice baths we found that it was impossible to run again on Mondays. They don’t remove lactic acid – but I’m not finished investigating.

John McDonnell passed away in Fayetteville, Arkansas on Monday, June 7. He was 82. The Ardagh native’s funeral Mass was held on Friday, June 11 in St Joseph’s Catholic Church, Fayetteville.