Last weekend felt like the arrival of summer. Glorious weather, the Euros and French Open on the television, and a plethora of Gaelic football and hurling games to watch. I even played my first competitive club match in 10 months. If I’m honest, I found it quite hard to keep on top of everything and fit it all in. First-world problems!
The best thing about the most recent round of National Football League action was that it had a championship feel to it.
All games had something on the line and that really contributed to the intensity and quality of action. Mayo’s victory over Clare ensures a return to Division 1 at the first time of asking and it’s good to be back, while the Division 2 experience provided some very entertaining affairs — and allowed James Horan to blood many new and exciting talents.
Mayo are back where they need to be. 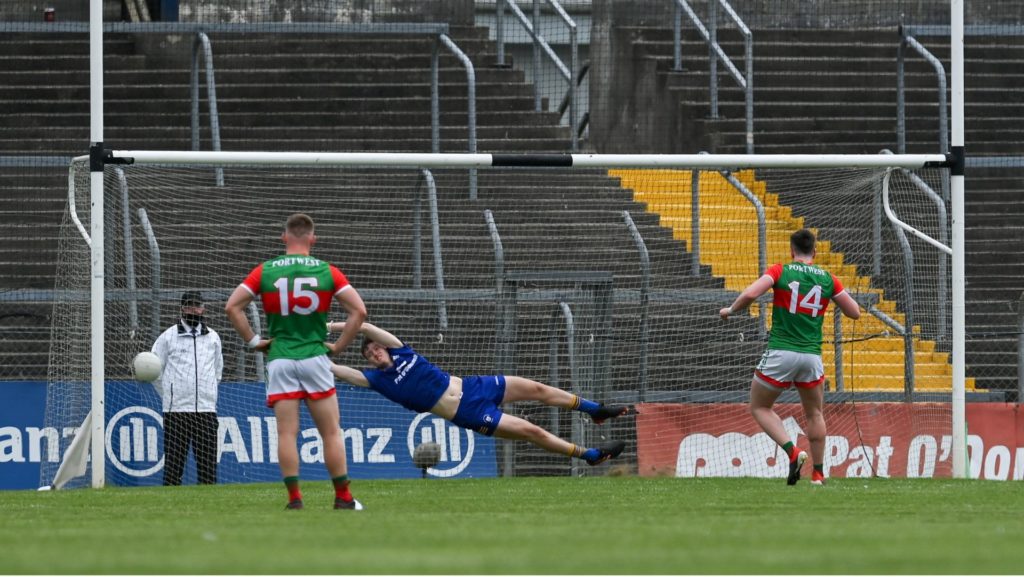 Without Mayo having played a Tier 1 team yet, it is hard to judge where they are at in the grand scheme of things.
But as a wise man once said, “you can only dance with the ladies in the dance hall” and the last month of football has provided many positives for Horan and his squad.
What struck me about the opening exchanges of the Mayo-versus-Clare game was the breakneck speed at which the match started and also the noise in Cusack Park. Although there were only 100-odd Clare men and women in the stadium, you could hear the raucous din and primal Banner roar every time Clare raised a white flag early on. Cusack Park is a great pitch to play on. It has the perfect mix of good surface, big field, and atmospheric stands, which are right on top of the play. This all added up to Championship-like stakes, as both teams tore into it from the get-go.
While Clare started well, Mayo cranked it up a notch from the 10th minute to half-time and outscored their opponents by 2-10 to 0-3 in that period. There is no team quite like Mayo for executing these power plays, which blow teams away in short periods. It is what Jurgen Klopp, the Liverpool manager, coined ‘heavy metal football’ and is characterised by high pressing, quick passing, hard running, and high work-rate. Think of the All-Ireland quarter-final against Donegal in 2014 and against Roscommon in 2017 as other examples of Mayo blasting their opponents away in first-half attacking onslaughts.
During this period, Kevin McLoughlin looked on top form, Cillian O’Connor was a constant threat, Ryan O’Donoghue hassled and harried, while Oisín Mullin, Lee Keegan, and Paddy Durcan drove forward. Gary Brennan, the former Clare midfielder, was on co-commentary for TG4 and he kept repeating the phrase, ‘An luas atá ag Maigh Eo’. He wasn’t talking about some light-rail system in downtown Castlebar, but the searing speed of Mayo’s buccaneering players. I couldn’t help but notice how wrecked and shell-shocked the Clare players looked as Mayo came in waves.
You could see the pain etched on their faces as Mayo turned up the dial on the intensity-ometer.
There was a 10-minute spell where it seemed like Aidan O’Shea caught every ball that was being kicked out under Cusack Park’s main stand. It was great to see O’Shea back starting and even better to see him positioned around midfield, right in the thick of the action. Without question, this is O’Shea’s best position. He thrives on being involved in the play, catching kick-outs, tackling hard, carrying the ball forward, and connecting defence and attack. If you asked Aidan, I am sure he would say that he much prefers playing in the middle third. I have played with him in the full-forward line and you can tell that he does not enjoy that position. At full-forward, he has to play with his back to goal and teams double up on him. Referees also afford him less protection when at 14, as he rarely gets frees that he should, and which smaller men would get, so moves quite often die with balls that are launched into him.
Apart from his obvious aerial prowess, an underrated part of O’Shea’s game is his kick passing from midfield. I used to always love receiving a kick-pass from him, as he would deliver it beautifully with one bounce in front of the receiver, in true Kerry style. You can take the man out of Kerry, but…
While there are few others like Mayo to destroy teams in quick, attacking bursts, equally, there are not many teams like Mayo to relinquish commanding leads and let opponents back into games. It was probably to be expected that Clare would rally somewhat. They are a good side, having an impressive season, and were a win away from Division 1. 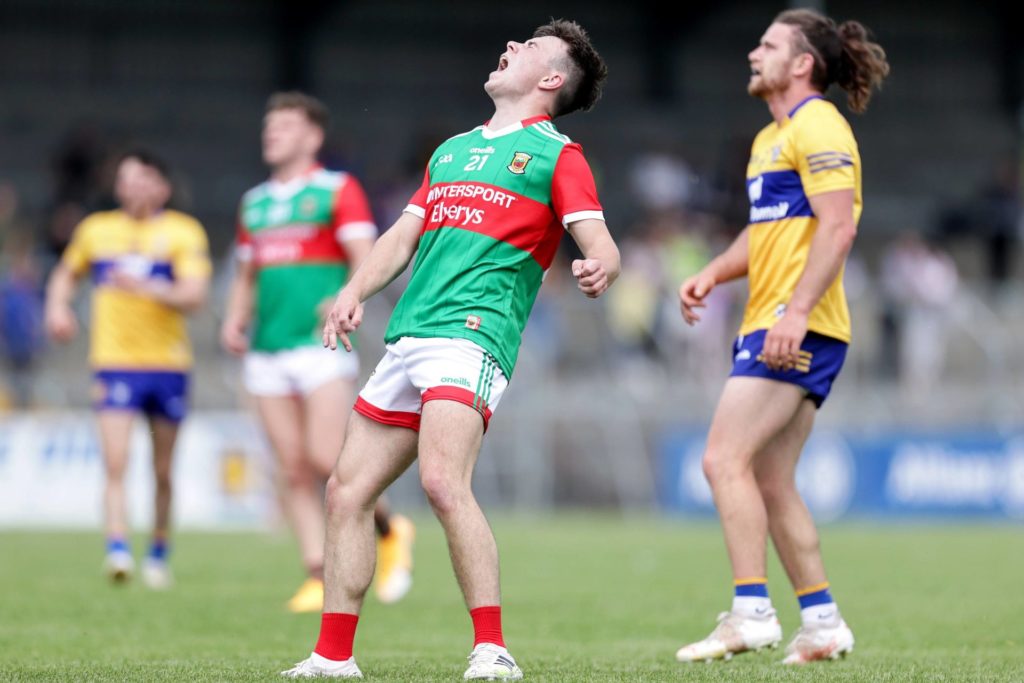 Kieran Shannon, the former Mayo performance coach who now lives in Clare, wrote in his column in The Irish Examiner at the weekend that last Sunday was “probably their biggest match in 20 years” and they were, therefore, never going to give up the ghost without a fight. The same article by Shannon cited a Clare player who colourfully declared that he’d “drink p*** off a nettle for Colm Collins!” and it was clear that the Claremen were fighting hard for their manager, fans, and Division 1 status in the second half.
Eoin Cleary, David Tubridy, and Darren O’Neill all caused Mayo plenty of bother in that second half. O’Neill reminds me of his namesake, Seamus O’Neill, who used to play for Roscommon. Maybe it’s the colours or the fact that they’re both mountains of men who look contemptuously and belligerently at smaller men who dare tackle them. When stationed on the edge of Mayo’s square, Darren O’Neill caused a lot of damage in aerial assaults, reminiscent of prime Donaghy, as Clare pilfered two second-half goals.
This may sound crazy, but, in my opinion, the player who had the biggest impact on the second-half was Mayo’s Cillian O’Connor, even though he wasn’t on the field. Mayo are a different team without O’Connor, Mayo’s tempo-setter. He is indispensable and, unequivocally, Mayo’s most important player. Not only did Mayo’s attacking play become a bit shapeless and ragged once O’Connor left the fold, but the team’s intensity and pressure game also dropped. Apart from his unbelievable scoring feats in his 100 caps, O’Connor is a ferocious tackler. When Donie Buckley was coach, we used to do tackling drills in our playing-lines, so, as corner-forwards, I was often paired with Cillian. You wouldn’t believe how strong a guy he is or how aggressively he tackles. O’Connor, at full-forward, sets the whole tone for Mayo’s heavy metal football. He also orchestrates Mayo’s raids on opposition kick-outs. How often have we seen him with hands in air, shuffling from side-to-side to close off space, while staring down the goalkeeper, who has just placed the ball on the kicking tee?

News that Cillian faces a prolonged spell on the sidelines as a result of an Achilles injury picked up just before half-time is a hammer blow to Mayo going forward.
As Mayo’s press dropped and became uncoordinated, gaps began to open at the back as Clare ran up a big score. After the Meath game a few weeks ago, I flagged my worry at Mayo’s concession of large tallies. Last Sunday won’t do much to allay that fear and when you see how awesome Kerry’s forwards are moving, it is something that Mayo need to tighten up on, as bigger challenges present themselves in the coming months. I do think, however, that summer football, good pitches, and perhaps lower fitness levels are contributing to high scoring totals in all matches.
As is to be expected, players are not quite at peak condition yet, so there are many more scoring opportunities opening up in the last quarters of games, as defenders are out on their feet. Cork conceded 25 points when disposing of Westmeath in the Division 2 relegation playoff and there were generally high-scoring games in the dry, tropical conditions nationwide. We definitely need to give some praise to the players, too; Mayo hit their first wide in the 32nd minute on Sunday and had 13 different scorers. Clare had eight. Credit where it’s due, as players’ practice levels and ball skills are higher than they’ve ever been.
In this league campaign, Mayo have rivalled Kerry as the most entertaining team to watch in the land. Let’s hope we can continue to produce swashbuckling football in the weeks ahead but there’s no getting away from one thing – Cillian O’Connor’s loss to this Mayo team is simply immeasurable.