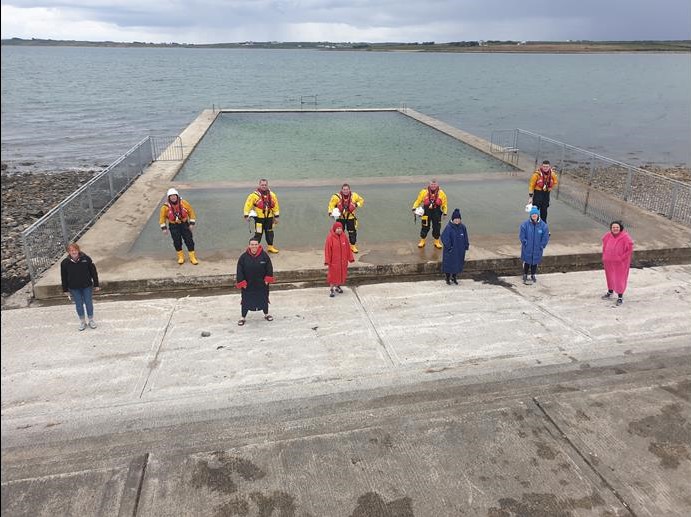 and Belmullet tidal pool swimmers have won a Golden Welly award for their fundraising efforts.

The RNLI award for Best Community Partnership Fundraiser, which is one of only six awards in all of Ireland and the UK, was announced last week at the RNLI’s virtual Mayday awards ceremony.

The volunteer lifeboat crew and Belmullet swimmers were overjoyed to hear their deep-end dipping and donating earned them the prestigious Golden Welly award.

The Golden Welly awards recognise and celebrate the fantastic work and contributions made to the RNLI’s annual Mayday fundraising campaign.

This year for the Mayday Mile, Michelle Healy and her mother Liz Healy, both on the committee of Belmullet Swim Club, came up with the idea of swimming a mile for the RNLI.

“There’s a great bunch of daily swimmers here in Belmullet,” Michelle said, “and they jumped at the chance to swim a mile to support the local lifeboat. We’re a coastal community and it’s important we all pull together and support each other.”

Volunteer members of the Ballyglass RNLI crew joined in and swam in their full kit. Over five days during May, a total of 59 swimmers swam a collective distance of 74.11 miles in their Atlantic tidal pool, raising €2,016.

Pádraic Sheeran, Ballyglass RNLI’s Lifeboat Operations Manager, said there has always been a great relationship between Ballyglass RNLI and Belmullet Swim Club with mutual respect and support at its core: “Promoting water safety and saving lives at sea are common goals of the RNLI and the swim group and we’ve always worked well together.

“We are very thankful to Liz, Michelle and the group of swimmers and the great work they do and we’re delighted to accept an award that acknowledges and celebrates that effort.

“The funds raised will now help our volunteers as they continue to save lives at sea.”