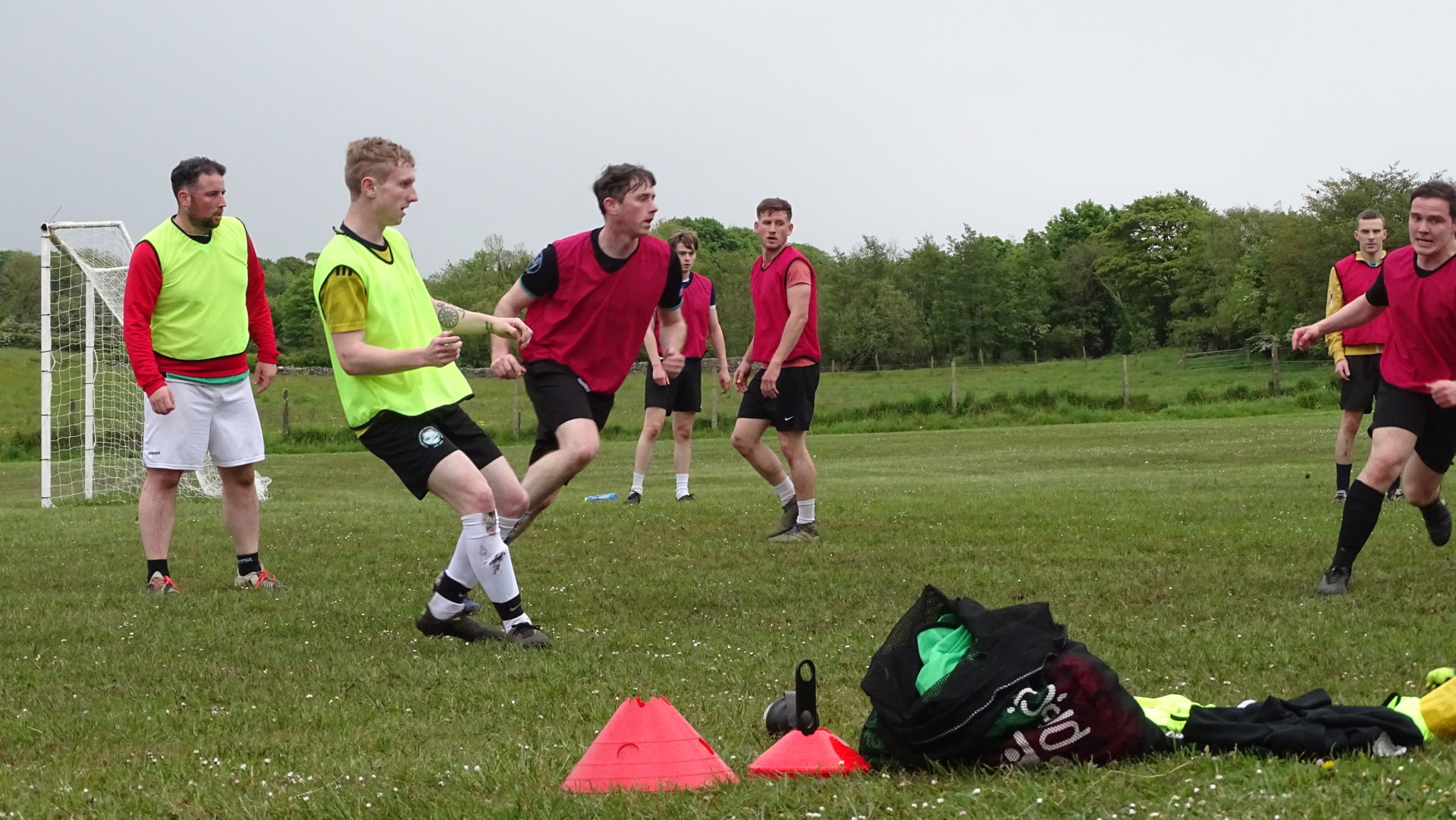 Conn Rangers’ pre-season training in full swing at Mount Falcon this week. The North Mayo club have entered a remarkable six teams between the Mayo junior and under-21 leagues.

Their junior A team is set to play in the Premier League, the B team will take part in League 2 while their newly-introduced C team will play in the newly created League 3. Meanwhile, their under-21 A team have kicked off their season in the under-21 Division 1 while their B and C teams of that age started their Division 2 campaign last weekend. Ironically, they played one another with the C team upsetting the odds and picking up a 4-2 win at Mount Falcon.

Conn Rangers, in total, are expecting to register between 330 and 340 players this season between underage and senior and will field 17 teams in total, including a senior women’s team and a women’s under-19 team.

The club is also set to commence work on the construction of two additional dressing rooms and a meeting room later this summer.

In addition, later this month the club will be launching its ‘Football for All’ programme, an initiative that aims to provide an opportunity for children with specific needs to get involved in football.

It marks a massive boon for a rural club that in the past has lost players due to emigration and other factors.

Club chairman PJ Duffy, who has a long-standing affiliation with the club going back to when it was first founded in 1970, said the boost in registrations and club membership is down to efforts put in by the Conn Rangers club and committee to ensure they had teams competing at every level through underage.

“We nurtured this over the last number of years and how that started out is that at one stage, we had good minor teams that went on to play senior. It was only really in the last 15 years we started to make sure we had a team at every age group,” said Duffy this week.

“The most important thing in making sure you lose no players is to provide them with the sport and that will keep them interested. You lose a few along the way for different reasons but thankfully it has bore fruit over the last number of years.

“We kept them together and now we’re at a stage where we have the players to field so many teams,” continued Duffy.

Mikey Bourke is an example of a player who has progressed in the way that PJ outlined. He has been with Conn Rangers since he was nine or ten years old, progressing through the underage ranks of the club. He made his debut for the senior team when he was 16 and a decade on, he captains the club’s senior A outfit.

“I’ve enjoyed every minute of my time with Conn Rangers and have had a lot of pride in playing for the club where I came from. The club has really gone forward and you can see the changes that have happened in the underage development over the years,” said Bourke.

“When we started off, it was just a couple of us playing down on an old field. The facilities have really developed massively over the years.”

The benefits of this can be seen in the age profile of the A team, with Mikey counting himself among the senior personnel at age 26.

“I never thought the day would come where I’d say I’m one of the auld fellas!

“There’s only a handful of lads older than myself and it is primarily being driven by younger players like Evan Reape, Barry Jordan, Mark McMahon and Keelan Jordan, to name a few,” he said.

“We had a great season last year and it was disappointing to see how it finished up. Promotion was on the cards and hopefully, that’ll drive us on this year. We know we have the quality coming through and there’s no reason why we shouldn’t be able to chase promotion again this year.”

Duffy and Bourke both spoke of the strong message the coaching teams at Conn Rangers employ at every level, from the youngest age group up into the senior teams. 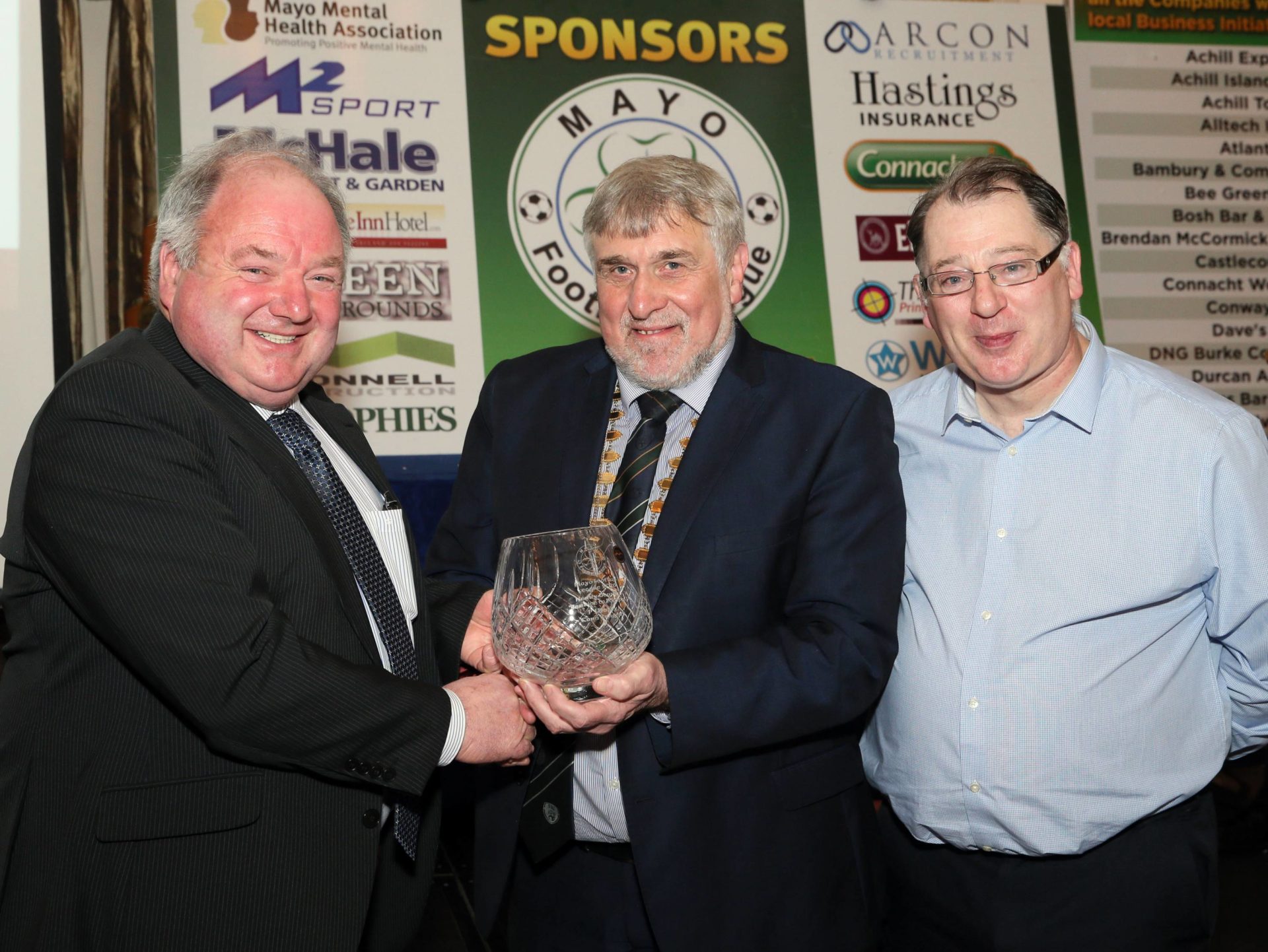 PJ Duffy, chairman of Conn Rangers, is presented with the Henry Downes Service to Football award by Noel Fitzroy, President of FAI Junior Council, and Padraig McHale, Chairman of the Mayo Football League, in 2017.

“It’s all down to the people who give their time, the coaches we have,” said Duffy. “The message from all the coaches is the same. If we do something at under-12, we want it to continue at under-13.”

“We always had passionate managers and coaches,” continued Bourke. “There is serious knowledge amongst the managers and a good structure going forwards with how the players are being developed.”

What is it then that makes Conn Rangers such a popular choice for players in the locality? There is no shortage of other soccer clubs and other sports to choose from in the Ballina and Knockmore area. For Bourke, he sees that success as being down to the club sending out the right message.

“Our popularity has grown massively through promoting ourselves online through things like Instagram. Our PRO does a brilliant job showing what is going on around the place and we wouldn’t have had that before,” said he.

“The other side of it is that people are coming again due to the effects of Covid and our numbers are bulking up again.

“We noticed a bit of a squeeze a few years ago where lads would go to England or Australia looking for work whereas we’re not losing those players at the moment, they’re staying or coming back to the locality.”

“The big thing for us,” said Duffy, “is that if the Mayo League gives us the different divisions, we can provide them with the teams, which includes the women’s teams as well.

“Where the senior women’s team came from is through building up the younger team. The senior team right now would be very much the under-19 team too, with a few exceptions. But again, it’s all coming from the coaching.”

Duffy said he has learned a lot of lessons along the way since he himself played minor and under-16 football for Conn Rangers back in the day. Now, he said, the club resembles something akin to a professional setup and is all the better for it.

“It stems from how well the club is run. The secret is to learn from your mistakes. Anyone who doesn’t make a mistake doesn’t really do anything at all. You have to get the right people and the strongest people doing the job they’re best at,” said he.

“We had to come through some not-so-great times with emigration over the years and I feel like we’ve turned the corner. I couldn’t thank the committee of the club enough, I couldn’t say enough about the brilliant work that they do and have done over the years.”