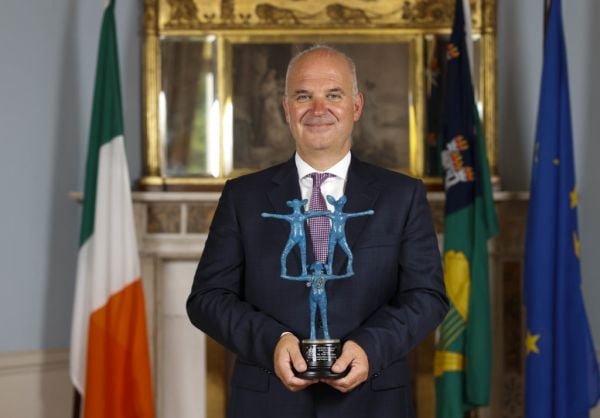 Ireland’s chief medical officer, Dr Tony Holohan has received the Honorary Freedom of the City of Dublin from the Lord Mayor of Dublin, Hazel Chu.

The conferral ceremony took place in the Oak Room of the Mansion House, Dawson Street, with his family present.

Dr Holohan accepted the Freedom of the City on behalf of all healthcare workers in the country.

At a Dublin City Council meeting held on July, 6th, 2020, all Councillors passed a resolution proposing that the Honorary Freedom of the City of Dublin be conferred on Dr Tony Holohan to acknowledge his work, and that of his team of health workers in Ireland, during the Covid-19 pandemic.

Speaking about the conferral, Lord Mayor of Dublin Hazel Chu said: “In conferring on Dr Holohan, and through him our health care workers, the Honorary Freedom of the City of Dublin, we recognise the immense effort and tireless work carried out by all our health care staff, and we want to, through this award, say a big thank you for their efforts and sacrifices.

“It has been an extremely difficult 16 months, and we owe our public health workers and frontline staff an enormous debt.”

Dr Holohan signed the Roll of Honorary Freedom and accepted the award on behalf of all health care workers, thanking the members of Dublin City Council for the recognition of the work done over this past year by the Public Health Team.

The Freedom has previously been conferred on 82 people. The first recipient of the Freedom of the City was Isaac Butt in 1876.

The most recent recipient was Jim Gavin, former Manager of the Dublin Men’s Senior Football Team.