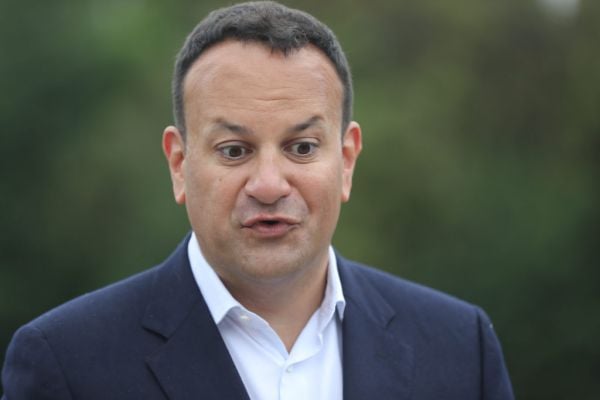 Tánaiste Leo Varadkar has defended comments he made saying that Irish reunification can happen in his lifetime.

The Fine Gael leader said it is never a “bad time” to talk about Ireland’s future.

His comments have attracted criticism from some unionists.

DUP MP Gavin Robinson described them as “deeply unhelpful and a destabilising contribution”.

.@GRobinsonDUP says the recent comments made by the Irish Tánaiste were, “deeply unhelpful and destabilising at such a grave time of political instability in Northern Ireland.” pic.twitter.com/yy8rARnwK4

Mr Varadkar told the Fine Gael Ard Fheis on Tuesday that Irish reunification should be the party’s “mission”, and he called for an increase in engagement with communities in Northern Ireland.

He said the “tectonic plates were shifting” in the region and called for his party to establish a branch across the border.

Speaking in Dublin on Wednesday, Mr Varadkar said his party talks about the future at its Ard Fheis.

“There is never a bad time to talk abut the future of Ireland and Ireland’s place in Europe and the world,” he said.

“I don’t think the debate around reunification belongs to any one political party.

“A lot of questions (are) unanswered about that and I want my party to be involved and lead the debate and discussion on what (the) position may be and that’s my motivation about it.”

“If they are unable to put together an Executive in the next week, it will be because of relations between parties in Northern Ireland and not for anything external,” he added.

“My view in the round is it’s always good to talk about the future.”

Mr Lewis said: “We would be concerned about any deviation from the principle of consent as enshrined in the Belfast Good Friday Agreement, but that agreement of course does respect the right of anyone to express their views and we fully support that.

“We do note the recent Life and Times survey which has support for a united Ireland at a low of 30% in Northern Ireland and I also am aware of the polls which put Sinn Fein ahead in the Republic, which may explain the timing of some of these comments from the Tanaiste.

“I would urge everyone to dial down any rhetoric, particularly at this time of year, I think it is unhelpful and ill-advised.

“Whatever the circumstances, this Government will support the principle of consent and all of our obligations under the Belfast Good Friday Agreement.”